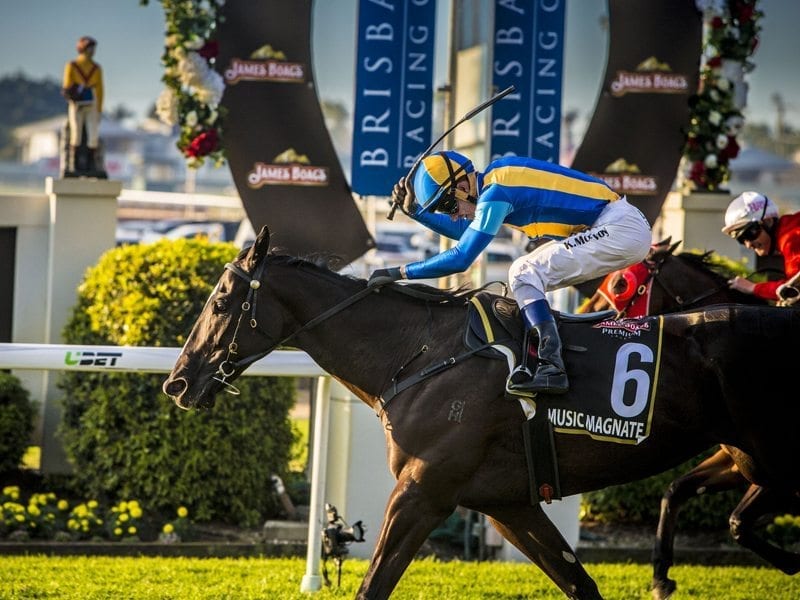 Music Magnate has toppled the favourite Azkadellia in the Group One sprint at Doomben 10,000.

A controversy over riding tactics could not overshadow the training performance of Bjorn Baker to land his first Group One win in his own right with Music Magnate in the Doomben 10,000.

The race was run at a hectic speed, resulting in the third fastest metric Doomben 10,000 of all time.

Byrne said when the pace started to ease Purton had come out and bumped his horse and soon as it happened Hooked grabbed the bridle and wanted to over-race.

Purton said Fell Swoop had wanted to pull hard as soon as Hooked came along beside him.

“I really had to strangle my horse and when he sensed Hooked was there he wanted to go again,” Purton said.

King said Two Blue had raced to her normal pattern.

But nothing could be taken taken away from jockey Kerrin McEvoy who showed great patience to score his second Doomben 10,000 win.

He brought Music Magnate ($9.50) with a storming run and to beat favourite Azkadellia ($3.80) by three quarters of a length with the consistent Charlie Boy ($18) third, a half head back.

Baker had a great run with his father, New Zealand trainer Murray Baker, and decided to branch out by himself in Sydney at Warwick Farm five years ago.

He has gradually built up his team and passed 100 winners for the season last month.

Baker has had previous success in Queensland, winning the 2014 Magic Millions 2YO Classic with Unencumbered.

“A Group One – it is just great. This horse has had a few problems but I always had the winter in mind and we deliberately gave him an easy autumn,” Baker said.

Baker said Music Magnate had not always indicated he would be a stable star but had gradually improved.

“To be frank he didn’t show me much as a two-year-old. But I have a lot of time for the Written Tycoon breed and he is another one who can really gallop.”

Music Magnate scored his sixth win and has now passed $820,000 in prize money.

Azkadellia lost no fans for the Stradbroke on June 11 as she came from last in the early stages.

“She has got a good turn of foot at the end of her races. But she had to make a long run and she just peaked,” trainer Ciaron Maher said.