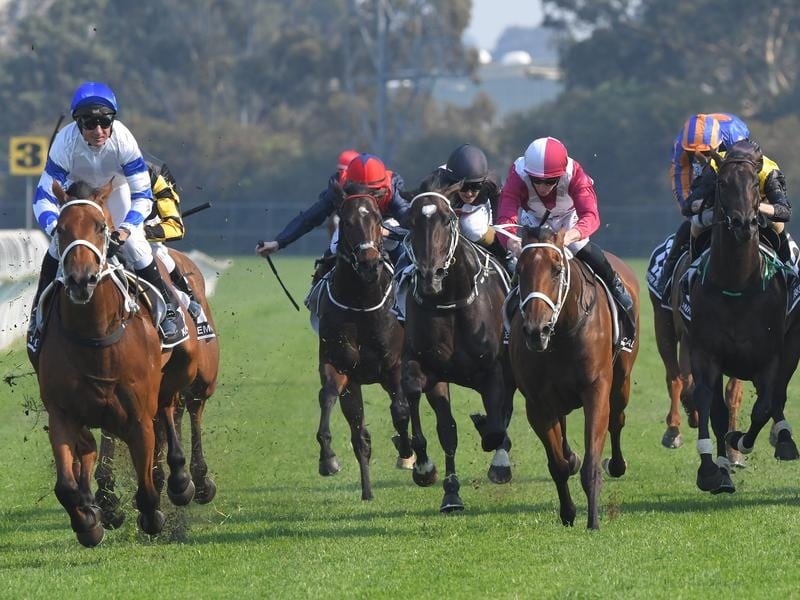 Kolding (l) will get his first look at Caulfield ahead of his Group 1 assignment in the Futurity Stakes.

New Zealand star Melody Belle and Group One-winning Sydneysider Kolding will get a look around Caulfield in separate gallops ahead of their clash in the Futurity Stakes.

The Jamie Richards-trained Melody Belle will chase her 11th Group One win in Saturday’s 1400m weight-for-age feature which will be her first start since running second to Irish visitor Magic Wand in the Group One Mackinnon Stakes at Flemington last November.

A week before the Mackinnon, Melody Belle was a dominant winner of the Empire Rose Stakes at the same track to secure her first Group One success in Australia.

Melody Belle has been in Melbourne for just over a week and the mare will be taken across town from Flemington to Caulfield to gallop on Tuesday morning.

“She’s going to go over to Caulfield tomorrow to have a decent hit-out over there and a bit of a look around the course, which I think is important because Caulfield can be a little bit tricky sometimes,” Richards told NZ Racing Desk.

“She’s been to Flemington before and she seems nice and settled and happy to be back there.”

The Chris Waller-trained four-year-old Kolding, winner of the Group One Epsom Handicap and $7.5 million Golden Eagle last spring, will make his Melbourne debut in Saturday’s Futurity.

Glen Boss has been confirmed to ride after gaining a reduction of a careless riding suspension on appeal.

Melody Belle is shading Caulfield Guineas-winning colt Super Seth and Kolding for early favouritism for the Futurity which has attracted 11 nominations.

Entries have been extended until Tuesday.