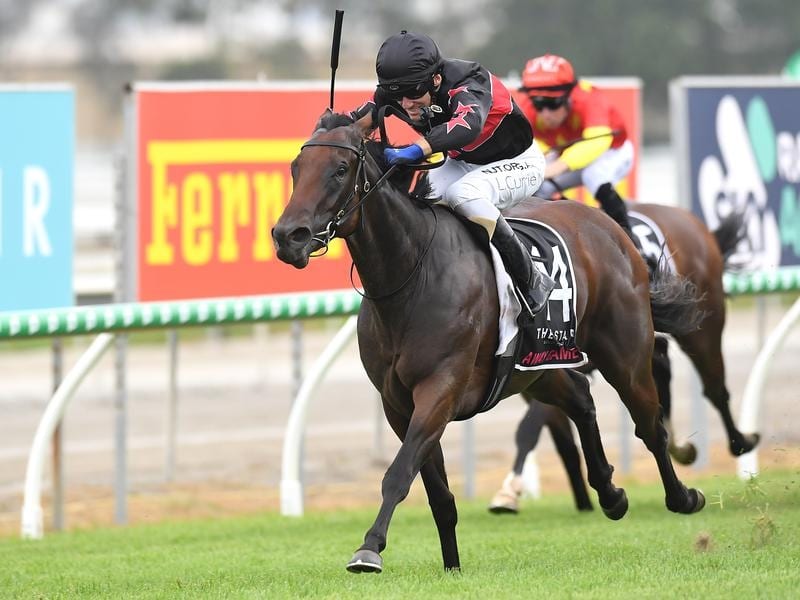 Away Game has given her Magic Millions 2YO Classic rivals a galloping lesson in the $2 million race.

Co-trainer Ciaron Maher struggled to think of a more satisfying win in his career after Away Game won the Magic Millions 2YO Classic.

All week Maher, who co-trains with David Eustace, had been predicting Away Game was ready to fire on the big stage but his claims were ignored by most.

Away Game cost $425,000 and is yet another daughter of super sire Snitzel to win a major race.

Maher said it was a thrill as the filly seemed to be ignored in Millions discussions despite her comprehensive win in the Listed Calaway Gal at her previous start.

“I really believed on her trackwork she was ready to fire in this race,” Maher said.

“I am a bit lost for words which is unusual for me. I feel a bit weird and don’t really know how to describe it.

“It is certainly one of the most satisfying moments of my career.”

Maher said Away Game might press on to the autumn for the Golden Slipper but a decision wouldn’t be made until he had time to assess the win.

“She has already won a Listed race and now she is a Magic Millions winner,” he said.

“She is different to Sunlight but she has a similar explosive burst when she lets down,” he said.

“Both times I have won on her she really put them away quickly.”

Brenton Avdulla, who rode Stellar Pauline said it was a gutsy effort.

“I followed the winner the whole way but she was a bit too good for us,” he said.

Damian Lane said he got further back than he wanted but he was proud of the effort of Conceited.

“I had to go a pair further back than I wanted but I was very proud of his effort,” he said.

Wisdom of Water did the best of the Queensland horses to finish fourth.

Away Game shortened from $26 into $11 for the Blue Diamond Stakes and $15 for the Golden Slipper.