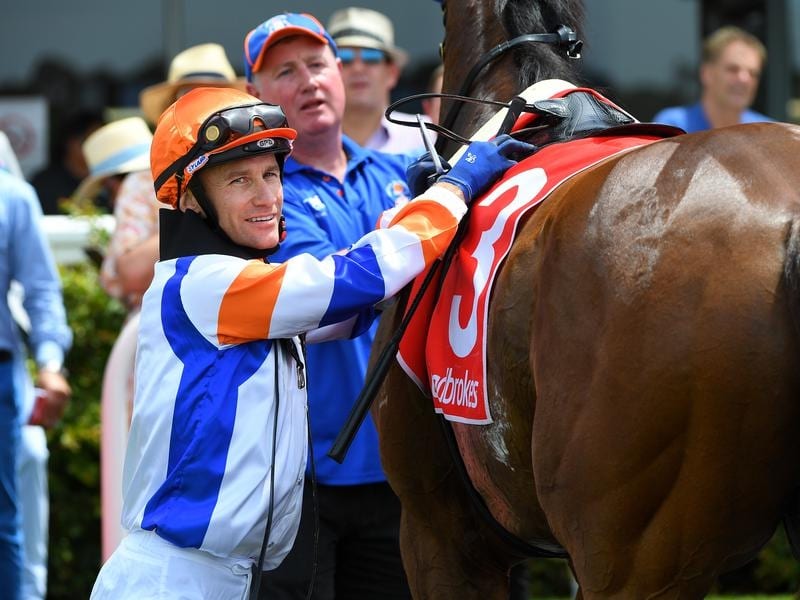 Jockey Luke Currie is facing several months on the sidelines recovering from injuries after a fall.

Multiple Group One-winning jockey Luke Currie is expected to be sidelined for months recovering from a spinal injury suffered in a fall.

Currie came off Yulong June in an incident past the winning post in the final race at The Valley on Friday night, suffering two fractured ribs and a fractured C7 vertebra which needed surgery.

Currie had been scheduled to ride the favourite Hanseatic in Saturday’s $1.5 million Blue Diamond Stakes at Caulfield. The colt finished second to Tagaloa with Tim Clark aboard.

Currie had an operation on Sunday.

“I had a bit of text messaging with him yesterday afternoon.

“He’s had his C6 and C7 fused and had a plate and some screws inserted, so he was recovering. He seems to be in pretty good spirits.”

Hyland said normally the recovery period would be a minimum of three months.

“I think it’s a minimum of three months but I don’t think anyone would be surprised if it’s a little longer than that,” he said.

“But that’s generally the case.

“It has come at a pretty ordinary time for Luke but it could always be a lot worse and just happy that he’ll make a full recovery.”

The injury would rule Currie out of international assignments for the Tony and Calvin McEvoy stable.

The McEvoys have ambitions to take Hey Doc to Dubai for next month’s Al Quoz Sprint and Sunlight to Royal Ascot in June.