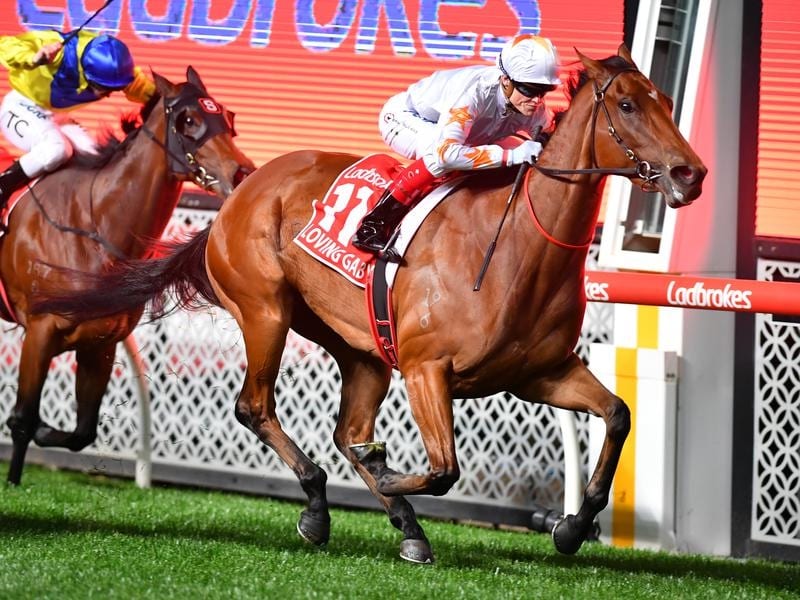 Loving Gaby has made history as the first 3yo filly to win the Manikato since it became a Group 1 race.

The decision to run Loving Gaby in the Manikato Stakes has been rewarded with the exciting filly creating history in the Group One sprint at The Valley.

Trained by Ciaron Maher and David Eustace, Loving Gaby became the first three-year-old filly to win the weight-for-age Manikato since its elevation to Group One status in 1989.

Sent out at $7, she defeated Perth gelding Vital Silver ($31) by three-quarters of a length in Friday night’s 1200m-feature.

Another three-year-old filly, Anaheed ($12), was a further length third.

Co-trainer Ciaron Maher made a late decision to include the $1 million race in Loving Gaby’s spring program believing it was a better option than the 1600m of the Group One Empire Rose Stakes on Saturday week at Flemington.

“Last preparation she got out to a mile and we thought maybe the Empire Rose Stakes was a good target for her after we weren’t going to get to the Thousand Guineas,” Maher said.

“But she has been really sharp in her work and in her race last start with a slow pace she was right up on the steel and I just wasn’t confident going to the mile without having another run.

“Then when this race came up winnable – it looked like it was between the three-year-olds on paper – and after the way she worked here on Tuesday, it gave us the indication to go this way.

“It’s just a relief for this horse. She’s always had the ability.”

While Loving Gaby, ridden by Craig Williams, broke through for a Group One win having finished runner-up twice at the elite level as a two-year-old, connections of odds-on favourite Bivouac were left to ponder what might have been.

The Golden Rose winner started $1.80 but the three-year-old colt ended up midfield on the fence from barrier one and never got a clear crack at his rivals in the straight, finishing sixth.

“We wanted to hold a bit of a closer spot than that and I never really got to let him off the bridle,” Bivouac’s jockey Kerrin McEvoy said.

“He would have measured up against those guys, no worries at all had we got clear running.”

Trainer James Cummings said the Godolphin team would now discuss whether to run him in the Coolmore Stud Stakes over the straight course at Flemington on Saturday week.