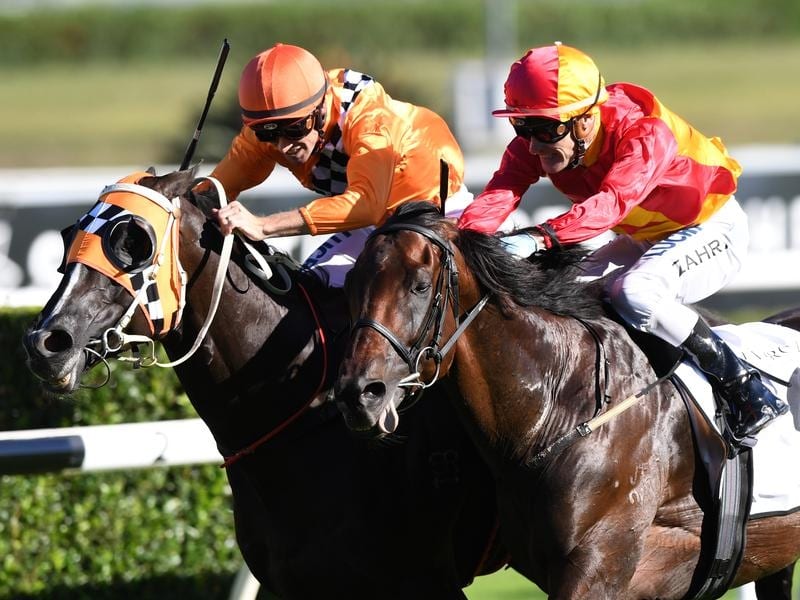 Levendi (r), 2018 Australian Derby winner, is scheduled to make his return from injury at Sandown.

After an absence of more than 18 months from the racetrack, Australian Derby winner Levendi is on the verge of a return.

The Peter Gelagotis-trained horse is among 18 nominations for the Group Three Kevin Heffernan Stakes (1300m) at Sandown on Saturday.

Levendi has not raced since winning the 2018 Australian Derby (2400m) at Randwick.

The now five-year-old needed surgery to remove bone chips from a knee with Gelagotis giving him a long recuperation, bypassing the 2018 spring carnival.

He was being prepared for a tilt at Sydney’s autumn carnival earlier this year but was injured in a barrier trial at Warwick Farm in February.

Gelagotis said Levendi was “airborne” in his comeback when he cracked the ilium bone in a hip during the trial.

After returning to work in late July, Levendi has had a slow build-up with Gelagotis wanting to give him a thorough grounding.

Happy with the work Levendi has done, Gelagotis took him to the Cranbourne trials on Monday and he finished fourth in a 990m-heat.

Gelagotis was pleased with Levendi’s effort and said the five-year-old only needed to please him in the next couple of days to take his place at Sandown.

“He trialled this morning and he ticked the boxes.

“He’s as bright as, didn’t blow, didn’t come up over the back and when we got home he got off the truck and was full of beans.

Saturday’s race has also been slated as the return for dual Group One winner Hey Doc who has not raced since finishing eighth in the Bobbie Lewis Quality at Flemington in September 2018.

English trainer Charlie Appleby has nominated D’Bai, a travelling companion of Melbourne Cup contender Cross Counter, while another stablemate, Setting Sail, has been entered in the Group Three Eclipse Stakes.