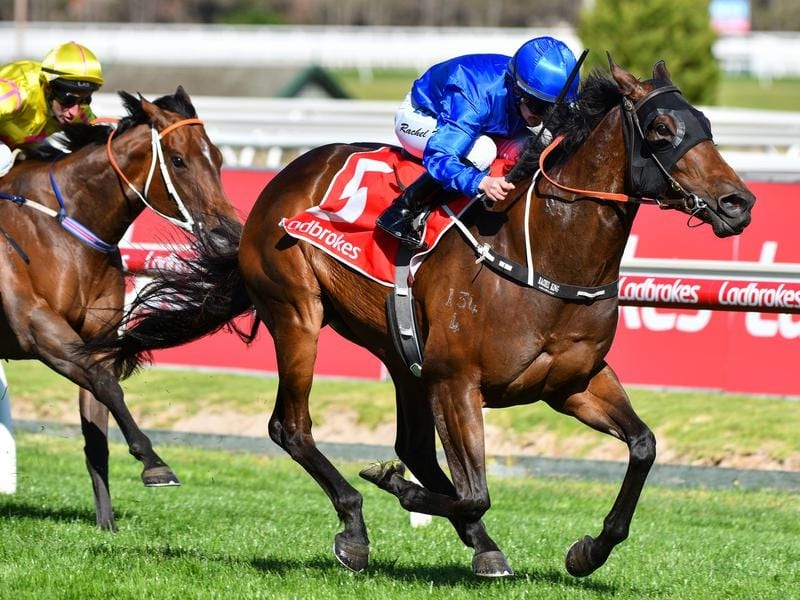 Manicure has given Sydney jockey Rachel King a Caulfield win at her first ride at the track.

Group One-winning Sydney jockey Rachel King has delivered a feature race victory aboard Manicure in her first ride at Caulfield.

King has competed in Melbourne at a couple of feature meetings at Flemington last season but was riding at Caulfield for the first time on Saturday and produced the goods on Manicure, overcoming the outside barrier draw in the Group Three How Now Stakes (1200m).

As odds-on favourite Pippie weakened out of contention in the home straight, the James Cummings-trained Manicure ($12) surged to the front with 200m to go and had 1-1/2-lengths to spare at the finish line over runner-up Angelic Ruler ($18).

Dawn Dawn ($21) was another three quarters of a length away third while Pippie finished second last of the 12 runners.

Having her first start since April, Manicure began brilliantly from the widest barrier and King was able to drop in just off the leaders, three-wide but with cover from the wind, before working into the race strongly rounding the home turn.

“She definitely made my job a lot easier, being my first time around here,” King said.

“We just got into a really good spot, I had a bit of cover from the wind and she was too good for them at the end.

“She was super strong today and felt enormous from the minute I got on her.

“It was her first time around here as well but she’s very versatile and very straightforward. You can put her where you like and she makes my job easy.”

The Group Three win on Manicure was King’s 12th stakes race success with the other 11 coming in NSW including last season’s Group One Spring Champion Stakes aboard Maid Of Heaven.

Jockey Ben Melham said Pippie ran below par but added he was also a little concerned about her action in the off-front leg.