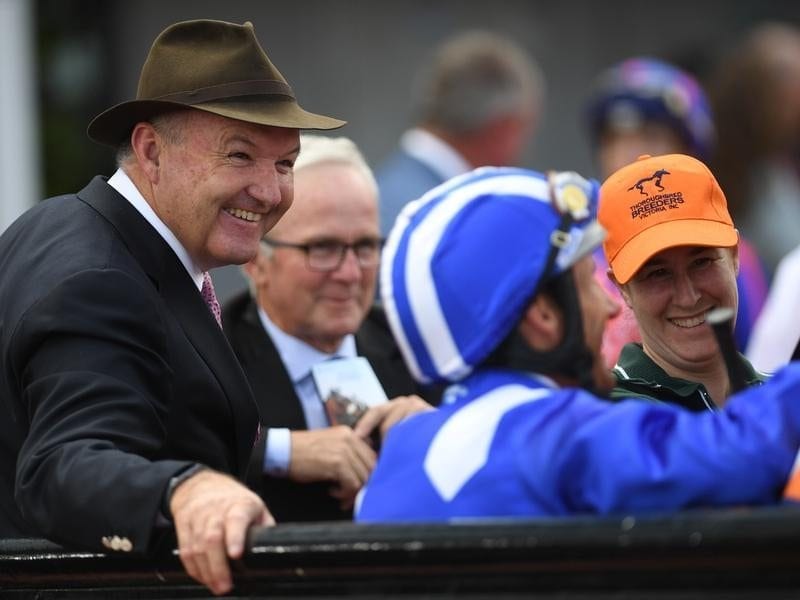 David Hayes is convinced Khulaasa is an even better filly than her promising record suggests.

Short-priced favourite Khulaasa has broken through for a stakes win at Flemington but champion trainer David Hayes is convinced the two-year-old filly is even better than what she is showing.

But Hayes admitted it was a nervous watch over the concluding stages on Saturday as the $2.20 favourite, ridden by Damien Oliver, narrowly held off Krone ($7.50) to get home by a short-head.

“It was a very long last furlong and we needed all of Ollie’s strength,” Hayes said.

“I’m not sure if this filly is suited by the straight. She hasn’t let down like I’ve seen her around a bend at home.

“It’s great to win a Group race, we’re thrilled with that, but she’s much better than she showed today.

“In her trackwork she works like a genuine top-class filly.”

Hayes, who trains in partnership with his son Ben and nephew Tom Dabernig, has pinpointed the $600,000 Group Two Percy Sykes Stakes (1200m) for two-year-old fillies at Randwick on April 14 as Khulaasa’s next target.

“She’ll go home and do a lot of training for Sydney and I think she’s worth a crack at it,” he said.

Hayes was impressed by the way Khulaasa’s stablemate Cristal Eyes ($12) finished the race off for third, another long neck away, to get a Group Three placing at her second career start.

He believes Cristal Eyes will be better suited over a bit further.