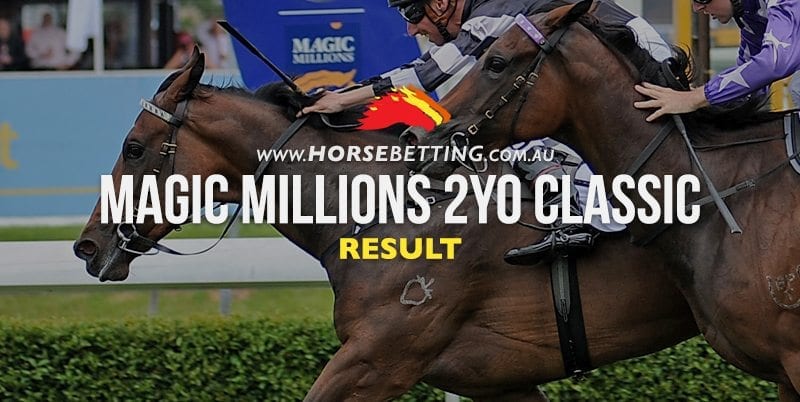 UNBEATEN filly Houtzen defied the critics and the wide gate to take out the Magic Millions 2YO Classic on the Gold Coast as the $3.70 favourite at Sportsbet.com.au.

The Toby Edmonds trained two-year-old rocketed out of the gates and took a position at the head of affairs and controlled the tempo from the front.

As the final 400m approached Houtzen looked like it had slipped the field but Chauffeur rattled home to just miss out in the shadows of the post to return $4.50 at WilliamHill.com.au.

The two horses who were meant to mount the biggest challenge to Houtzen – From Within and Ours To Keep – failed to make an impression and were not in the finish.

Jockey Jeff Lloyd said Houtzen was not the self-assured Houtzen that had won its first two starts of its career and believes the post came at the perfect time for the filly.

“She did it all, she did it tough.” Lloyd said.

“She didn’t really come back to me in the front, I had concerns throughout the race she might have gotten across too quick and we were doing too much. She had enough in the last 50 but she was entitled to.”

Trainer Toby Edmonds said the veteran jockey gave the horse the ideal ride from the front of the field.

“I left it to (Jeff Lloyd) basically, we’ve been through the race so many times and the way the track was playing today, we even talked about riding her different.

“Then what I got in I said ‘bugger it’, if we take her out of her pattern it might not work, so let’s just let her roll and see what happens.”

Edmonds said there is no doubt as to who the best two-year-old in the country today.

“Jeff was really, really aggressive. Probably ran through the bridle a bit, she got a bit tired but she’s entitled to.

“Such a great effort.”