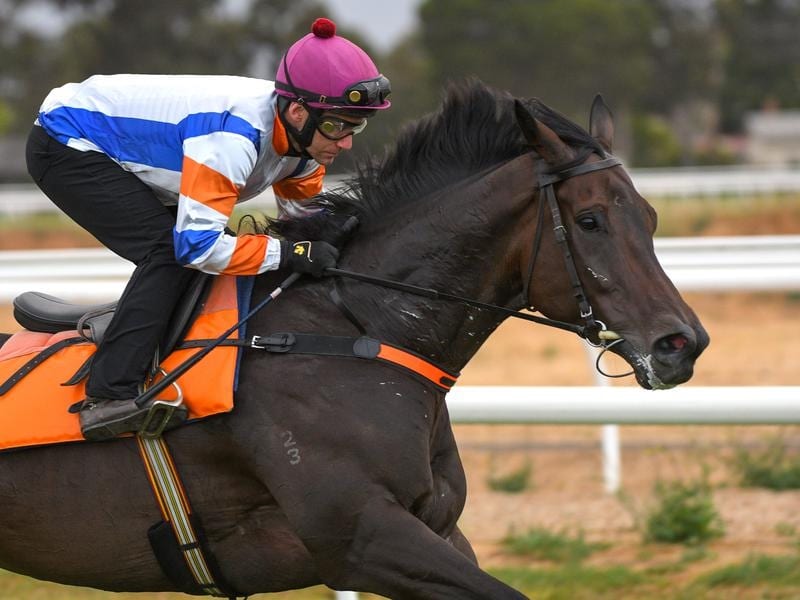 Hey Doc has tuned up for the Group Two Australia Stakes with a solo gallop at The Valley.

Multiple Group One winner Hey Doc remains on track for a tilt at the Al Quoz Sprint in Dubai if he pleases trainer Tony McEvoy in his upcoming Melbourne assignments.

Hey Doc was a dominant winner of the Group One Winterbottom Stakes (1200m) in Perth on November 30 at his second start back from 14 months off the scene after undergoing joint surgery.

The gelding’s next start is Friday night’s Group Two Australia Stakes (1200m) at The Valley and on Monday morning the six-year-old was taken to the track where he produced a pleasing solo gallop over 1000m with Luke Currie aboard.

McEvoy, who trains in partnership with his son Calvin, has also pencilled in the Group One C F Orr Stakes (1400m) on February 8 before the Al Quoz (1200m) in March.

“I think if he runs well on Friday night we’ll look at going to the Orr, but Dubai is definitely on the cards,” McEvoy said.

“On his win in the Winterbottom he would run well in any sprint anywhere in the world. So if he can just keep in that form he’ll be very hard to beat over there.”

Australian sprinters have won the Al Quoz twice with Ortensia successful in 2012 and Buffering in 2016.

McEvoy has kept Hey Doc ticking over since his return from Perth and expects him to be hard to beat in the Australia Stakes at a course where he won the 2017 Group One Manikato Stakes (1200m).

“Luke was pretty happy with him this morning,” McEvoy said.

“He said he felt nice and strong and normal and used his action well. He loves The Valley.

“Two months between runs with a big, heavy horse like him, it’s very hard to keep him right up to the mark so he hasn’t been screwed down tight for this but he’s pretty close.”

Hey Doc’s Group One-winning stablemate Manuel also galloped at The Valley and will make his return in the Australia Stakes ahead of a defence of the Orr Stakes.

McEvoy said Manuel was tired after his previous campaign which ended in Brisbane during the winter, and the trainer believes they will be rewarded for not racing him in spring.

“We started off in this race with him last year before he won the Orr, so we’re on the same path,” McEvoy said.