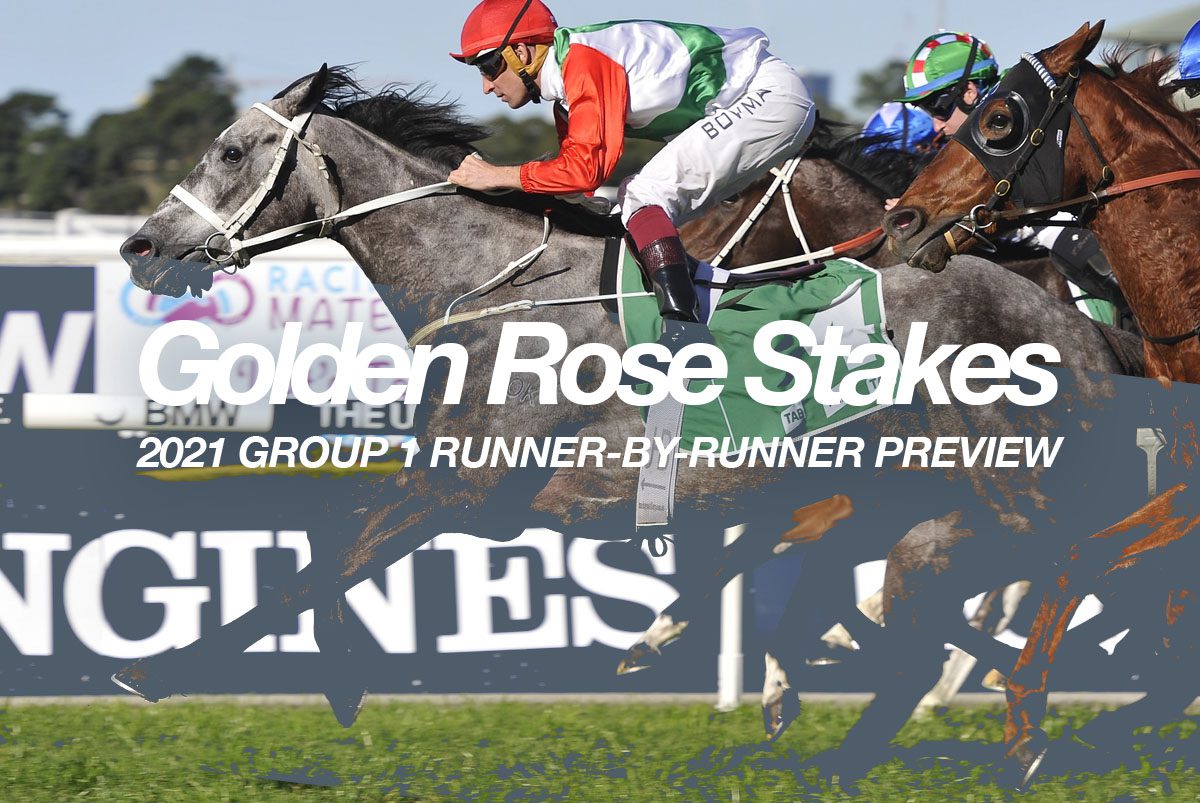 HorseBetting brings you a full runner-by-runner preview of this Saturday’s Golden Rose Stakes at Rosehill Gardens, as well as a $100 betting strategy for the Group 1 feature. A competitive field of 13 has been assembled, headlined by Sires’ Produce Stakes winner Anamoe ($1.90). In The Congo ($10) will lead from barrier six, while we should see Tiger Of Malay ($21) and Moridan ($101) handy in the run. Two fillies take on the 11 boys, including the Queensland-trained Startantes ($19), who has won three straight races at Doomben this campaign. Anamoe will look to be the fourth Godolphin horse to complete the Run To The Rose/Golden Rose double.

Star colt Anamoe returned in brilliant style to win the Group 2 Run To The Rose a fortnight ago at Kembla Grange, defeating In The Congo by half a length over 1200m. The son of Street Boss has had eight starts to date, winning four of those and placing on three other occasions, with two of those at Group 1 level in the Blue Diamond Stakes and Golden Slipper. The Golden Rose has been Anamoe’s target race since he won the Sires’ Produce Stakes (1400m) at Randwick in April by 2.8 lengths, and given how well he returned first-up, there is no reason why he can’t add another Group 1 to his tally. Barrier eight should see him out of trouble in the middle of the pack and storming home down the middle of the Rosehill straight.

Blue Diamond winner Artorius heads back to Sydney for a crack at the Golden Rose after being somewhat disappointing last start in the Listed Exford Plate at Flemington. While he got beaten by only 0.2 lengths, he did start a $1.60 favourite and seemingly had every chance to win and stamp himself as Victoria’s top three-year-old. The son of Flying Artie generally gets back in the run due to a lack of gate speed, and from barrier 11, Collett may have no other option again, and that could bring him undone in a race which lacks a great deal of speed. Artorius did win the Blue Diamond third-up over the summer and comes into this third-up, but we aren’t convinced he is going as well this prep despite running second twice.

Snowden-trained colt Captivant is one of only three Group 1 winners lining up here, yet we are getting $34 about him. The son of Capitalist ran on very well in the Golden Slipper to finish fifth, before placing third behind Anamoe in the Sires’ Produce and then winning the Champagne Stakes (1600m) in April. Captivant looked set for a big spring after resuming with a half-length defeat at Kembla Grange in the San Domenico Stakes, but he was a touch plain second-up in the Run To The Rose when finishing sixth. We are happy to forgive that run, as the 1200m isn’t his go, so now third-up and out to 1400m he should be much better suited. Barrier one will only aid his chances, as Sam Clipperton should be able to settle closer in the run. Include in the multiples.

The first of the Hawkes-trained pair in the field is dual Group 1 placegetter Hilal. The son of Fastnet Rock was a brilliant winner on debut on the Kensington track back in February but has not won since, placing a further four times including back-to-back seconds in the Sires’ Produce and Champagne Stakes at the end of his autumn preparation. Hilal resumed with a disappointing run in the McKenzie Stakes on August 21, but we are putting that down to the fact that he didn’t handle Moonee Valley. He was much improved on September 11 and was a touch unlucky when third in the Exford Plate behind Mr Mozart and Artorius, indicating that he was back on track. Back to Sydney will be a big assistance, and third-up at 1400m should be to his liking. Barrier 13 is the only knock, but he did jump from the outside alley when second in the Sires’ Produce.

In The Congo has started his career with two wins and three seconds from just five goes, including an all-the-way win in the Group 3 San Domenico Stakes on August 28. The Snitzel colt then led everywhere bar the final 50m in the Run To The Rose last time out when Anamoe grabbed him late over the 1200m trip. Drawn in barrier six, Tim Clark will take In The Congo forward and look to dictate terms from in front; however, it is his first look beyond 1200m, which could bring him unstuck. He will be there for a long way, but we don’t think he can turn the tables on Anamoe at 1400m.

Tiger Of Malay brings a differing form reference from the first five gallopers, as he comes through the Up & Coming Stakes (1300m) and the Dulcify Stakes (1500m). The son of Extreme Choice had a terrific Winter Carnival in Brisbane, winning the Group 2 BRC Sires’ Produce Stakes (1400m) before running third at Group 1 level in the J.J. Atkins (1600m). The residual fitness carried over from the winter show in his first-up run in the Up & Coming, where he was a tough winner. The Freedman stable then elected to give the colt a one-month rest after that, after which he ran a very tough race again when second to Giannis on September 11. He should settle in the first four in the run from barrier four and be strong late under ‘Group 1 Bossy’.

Remarque has been a bit of an enigma in his four career starts, which makes him hard to place here. After winning well on debut at this track on January 16, he ran fifth in the Todman Stakes in March before going for a spell. We then didn’t see the Snitzel colt for four months, but he came back in great fashion at the trials before running a luckless third in the Rosebud behind Paulele and In The Congo. Remarque was then heavily backed in the Run To The Rose, where he started as favourite over Anamoe, but he didn’t have the speed to match motors late and ran third, 1.5 lengths behind the winner. He looks to be crying out for 1400m and has drawn a good barrier to be in a prominent position, but we can’t see him turning the tables on Anamoe.

Chris Waller’s colt Giannis really got down and dirty first-up in the Dulcify Stakes, lifting off the canvas to beat Tiger Of Malay by two-tenths of a length. The son of Flying Artie, like Tiger Of Malay, had a terrific Brisbane Winter Carnival, highlighted by his second-placing in the J.J. Atkins at Group 1 level. Drawn in barrier nine on Saturday, Kerrin McEvoy will have a few options, but given he is dropping back in trip from 1500m to 1400m, we think he will go back and look to hit the line strongly as they head towards the Caulfield Guineas. He is an interesting runner and one we don’t want to completely dismiss, but it is hard to see this being the target race over 1400m.

Royalzel is one runner we were surprised to see open up at the massive odds of $81. The son of Snitzel has won four from seven, including a three-length romp at Listed level at Flemington in July, and claimed a gritty third behind Giannis in the Dulcify Stakes a fortnight ago. Rachel King will have her first sit on the colt, which isn’t ideal, especially given her average record at Group 1 level. He might need a wet track to be competitive and the wide alley doesn’t aid his chances.

James McDonald has ridden Coastwatch in seven of his eight starts but jumps off to retain the ride on Anamoe, so in-form hoop Nash Rawiller will take over. The Chris Waller-trained gelding – the only gelding in the field – defied a betting drift in the Ming Dynasty Quality (1400m), winning by almost a length over Military Expert and Subterranean. The start prior to his win, Coastwatch got into a ding-dong battle with Tiger Of Malay in the Up & Coming Stakes, missing by only a nostril on that day. Both wins have been at 1400m, so the distance should suit, but we cannot have him at Group 1 level.

The rank outsider of the field comes to his first Group 1 appearance on the back of a one-length maiden win on the Kensington track on September 15. Moridan ran third on debut at Hawkesbury, finishing 2.5 lengths behind Ma And Pa, which isn’t awful form given that horse has won since, as has the fourth-placed horse, but it is not Group 1 form. If anything, this son of Maurice can make this race more genuinely run and set it up for Anamoe.

Jamaea – the first of two fillies in the race – was a brilliant last-to-first winner of the Group 2 Furious Stakes against her own sex on September 4, defeating Robodira, Mallory, Enterprise Pomme and Four Moves Ahead. That win was visually appealing, but it was also backed up by the clock, with the field running a second quicker than both the Highway race and a Benchmark 78 on the same day. Drawn in barrier seven, Jamaea’s regular rider, Brock Ryan, is likely to settle in the second half of the field and attempt to track Anamoe into the race, which will take her a long way. She is a live each-way chance here.

Queensland filly Startantes has won her past three starts, including a victory over Alpine Edge, who was an unlucky runner in the Caulfield Guineas Prelude on Saturday. The daughter of Star Turn then settled last over 1350m on September 11 at Doomben and put paid to the field to win by 2.25 lengths over Whitewater and Bulloo, with Group 2 winner Prince Of Boom in fourth. Connections paid the $37,000 late nomination fee during the week, which is a massive push given she would need to run at least fourth to make up the costs. Drawn in barrier 10, this tiny filly will get back in the run under Regan Bayliss and will be letting down strongly late. Robert Heathcote sent Rothfire to Sydney for this race 12 months ago, so he knows what it takes to set a horse for the Golden Rose. She will run a massive race here.

We are chips-in here with Godolphin colt Anamoe. He has been terrific in his entire career to date and looks primed to win his second Group 1 at 1400m. While the $1.90 quote isn’t anything to spruik, we could look back down the track and question how he didn’t start $1.30. Anamoe is a star. Startantes is the clear danger, in our opinion, and the $19 quote is not a great reflection of her ability, while the other filly, Jamaea, can run a cracker at odds too. Hilal rounds out the top four, as he should relish getting back to Sydney.