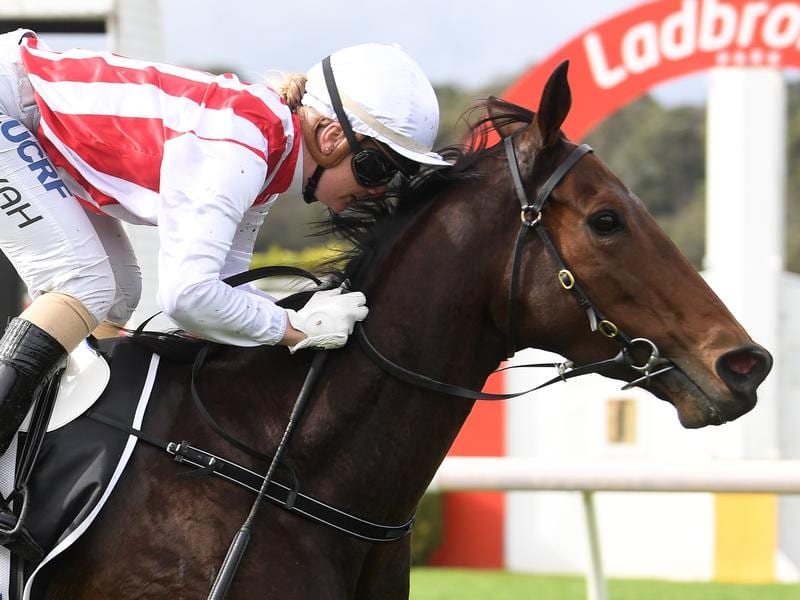 Global Sanction will aim for back-to-back Sandown wins when she steps up in grade and distance.

Trainer Grahame Begg does not see a longer than initially planned gap between races as a problem for lightly raced mare Global Sanction who will be chasing back-to-back victories at Sandown.

Four-year-old Global Sanction finished strongly to win a 1500m benchmark 64 race on the Sandown Hillside track and she heads into Saturday’s Ladbrokes Cash In Handicap (1600m) on the Lakeside course having had just over five weeks between runs.

“She was supposed to run at Ballarat a couple of weeks ago but they transferred the meeting from the turf track over to the synthetic track so we decided to wait,” Begg said.

“I wasn’t keen on running her on the synthetic track so we decided to wait for this race.

“In saying that she’s a lightly framed mare and a month between runs should not be an issue for her. She had a good space (27 days) between her first-up run and her last-start win at Sandown, and she’s very clean-winded.

“It’s a big jump from a benchmark 64 race to an 84 but it’s against mares and she’s on the limit weight.

“I expect her to run very well.”

Global Sanction has won three of her 12 starts and Begg says the mare has always shown ability but has taken time to put it all together, and to also fully get over a bout a travel sickness last year.

Begg had to abandon 2018 Australian Oaks ambitions in Sydney last year when Global Sanction suffered travel sickness leading up to the Adrian Knox Stakes at Randwick after winning a Geelong maiden at her previous run.

“She got sick travelling up there and I reckon it might have just taken her a long time to get over that,” he said.

“Hopefully that’s all behind her and we can string another win together.

“She seems to be back on song now.”