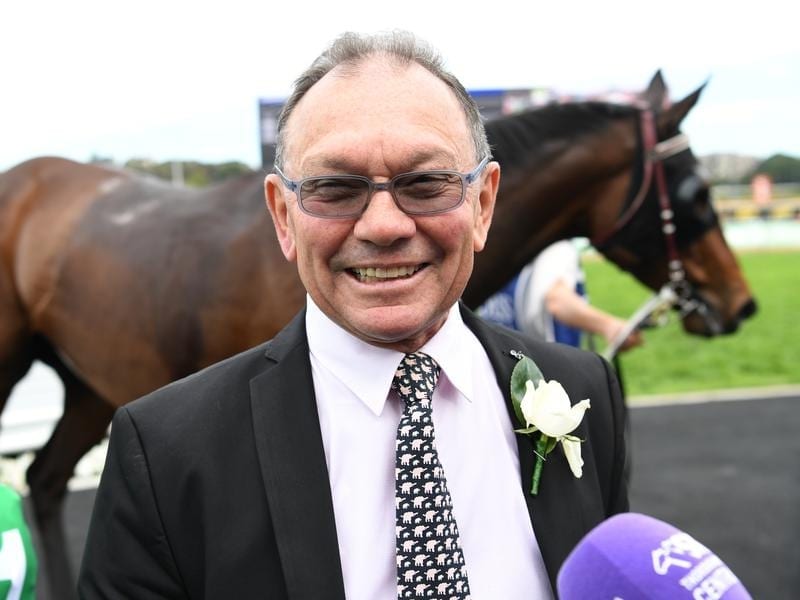 Trainer Gary Moore has high hopes for Paquirri against older horses in the George Moore Stakes.

Gary Moore says he wouldn’t dare repeat his famous sprint along the course proper straight if his horse Paquirri wins at Doomben.

It would be an emotional win for the trainer as Paquirri will be the first runner he has had in the race named after his late father, the legendary jockey and trainer George Moore.

Paquirri will be having his first start since being unplaced in the Group One Coolmore Stud Stakes at Flemington a month ago when he runs in Saturday’s Group Three George Moore Stakes (1200m).

Gary Moore is famous for running down the straight to greet Takedown after he won the Group One 2016 Winterbottom Stakes in Perth.

“I have ridden and trained winners at Doomben and Eagle Farm but this will be my first runner in the race named after Dad,” Moore said.

“It would be obviously be great to win it and I might be tempted to run up the straight but really I wouldn’t dare.

“Dad would be watching and he would not be impressed. He would probably tell me I was an idiot and he was leaving the track with embarrassment.”

Moore is bemused by Paquirri’s odds with the colt at $71 on Thursday.

Paquirri is already a Group Three winner of the Kindergarten Stakes in which he beat Legend Of Condor and Lean Mean Machine.

He has been unplaced in three starts in top company this campaign and has not jumped cleanly in any of them, the San Domenico, Run To The Rose and the Coolmore Stud Stakes.

“He was unplaced in those runs but didn’t have much luck in any of them,” Moore said.

“It is a sharp step back in class for him on Saturday. He has done well and had a solid jump-out since his last run.

“Provided he gets a dry track and he certainly wasn’t going to get that in Sydney, I think he can race well.”

Paquirri is a Magic Millions horse and the rich January race day is among his options.