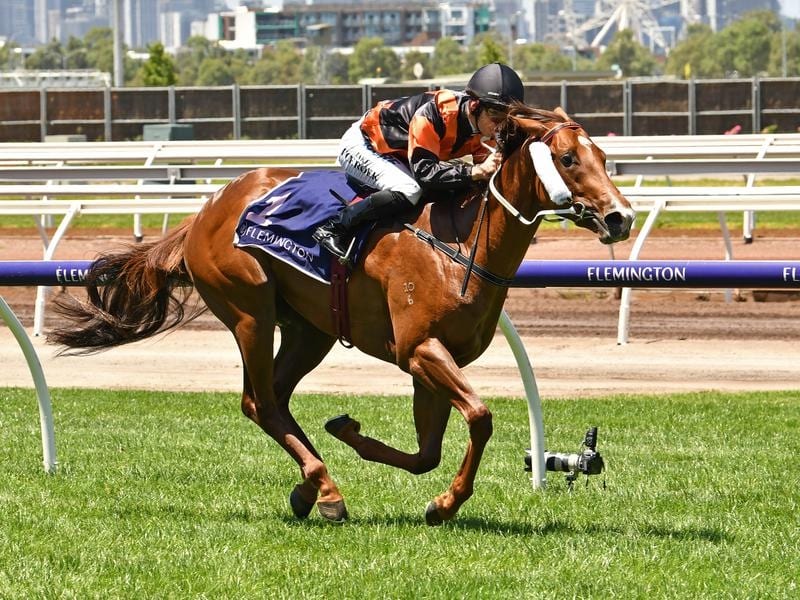 After 10 months away from racing, Adelaide colt Free Of Debt is primed to make his return at Caulfield.

Free Of Debt has not raced since last year’s Golden Slipper at Rosehill, a race he came out of with a number of cuts and abrasions.

As he was being prepared for a spring return, Free Of Debt sustained a hind leg ligament injury in a barrier trial at Murray Bridge, forcing his campaign to be aborted.

“Jake Toeroek, who rides him in his work and at his first two wins, said while he trialled well he wasn’t himself,” trainer Chris Bieg said.

“We sent him over to Ballarat for a bone scan, that came back clear, but when we scanned the ligaments, that’s when we found one with a slight strain in it.

Well-travelled and quiet around the stable, Free Of Debt has raced four times at four different venues.

Bieg sent the colt to Melbourne on Sunday to take advantage of a gallop on the Caulfield course proper with race jockey Jye McNeil aboard on Tuesday.

“Jye’s quietly confident that fitness-wise we’ve got him where we want him,” Bieg said.

“Behaviour-wise he was spot-on, nice and keen and fresh, so it’s good heading into Saturday.”

His performance on Saturday and in the C S Hayes Stakes (1400m) at Flemington on February 15 will determine Free Of Debt’s program.

While The All-Star Mile (1600m) at Caulfield on March 14 is an option, Free Of Debt is also nominated for the Newmarket Handicap (1200m) on March 7.

“We’ll see how he goes second-up in the C S Hayes and then push through to the All-Star Mile if we’re looking like getting the votes to get in,” Bieg said.

“If he comes out on Saturday ultra keen and Jye gets off him and says we might be a year early for the All-Star Mile and let’s keep him sprinting, then the Newmarket,.

“It’s a Group One that he’ll get in with no weight and being a three-year-old it could be a genuine option.”