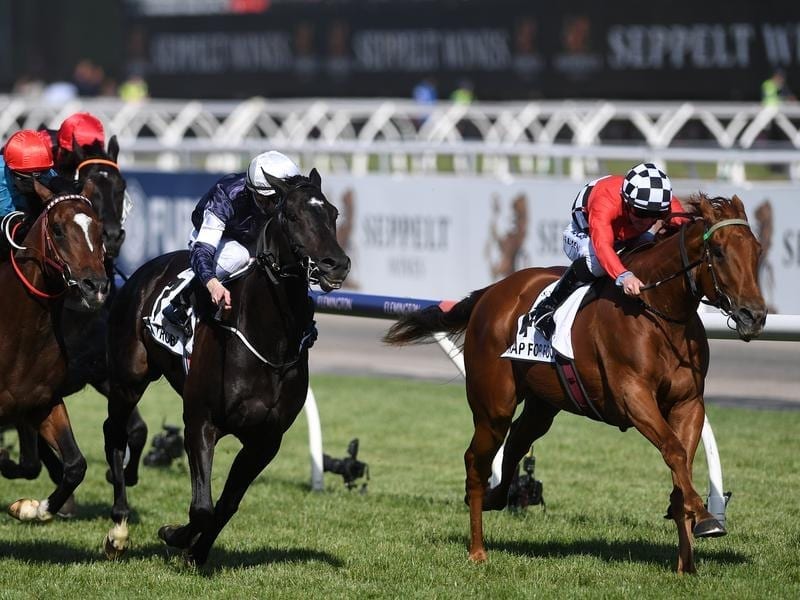 Trap for Fools (r) will try to claim his second Group One victory when he runs in the Kingston Town.

Damien Oliver has been booked to ride Trap For Fools in the Kingston Town Classic in Perth and will jump aboard the last-start Mackinnon Stakes winner in a track gallop before the Group One race.

Trainer Jarrod McLean has confirmed Oliver’s booking for Trap For Fools after several other names were mentioned.

Saturday’s $1 million weight-for-age race at Ascot, the final Group One race for the year, has attracted a field of 15.

“He will have a spin on him at Ascot tomorrow morning,” McLean said.

Trap For Fools began his career in the west, racing there 22 times before being sent to McLean’s stable in Victoria earlier this year.

The five-year-old gelding has had nine starts for McLean and registered his biggest win last start in the Group One Mackinnon Stakes (2000m) at Flemington on November 10.

McLean will be back in Perth to watch Trap For Fools’ gallop on Tuesday morning.

Star local filly Arcadia Queen, to be ridden by Western Australia’s leading jockey William Pike, was the $2.80 favourite on Monday after the declaration of the final field with her Group One Railway Stakes-winning stablemate Galaxy Star second favourite at $4.60.

Both are raced by prominent owner Bob Peters.

As a three-year-old filly, Arcadia Queen has 50kg under the weight-for-age conditions and will be getting between 6.5kg and 9kg off all her rivals.

Trap For Fools was on the third line of betting at $6.

McLean is also the Warrnambool foreman for Victoria’s premier trainer Darren Weir who has Iconoclasm and Holy Snow in the field.

Weir won the Kingston Town with Stratum Star two years ago and the trainer also won Saturday’s Group One Winterbottom Stakes at Ascot with Voodoo Lad ridden by Oliver.

Chris Waller has Mister Sea Wolf in the race as Sydney’s premier trainer tries to win the event for the second time after Moriarty’s 2014 victory.

The barrier draw will be conducted on Tuesday.