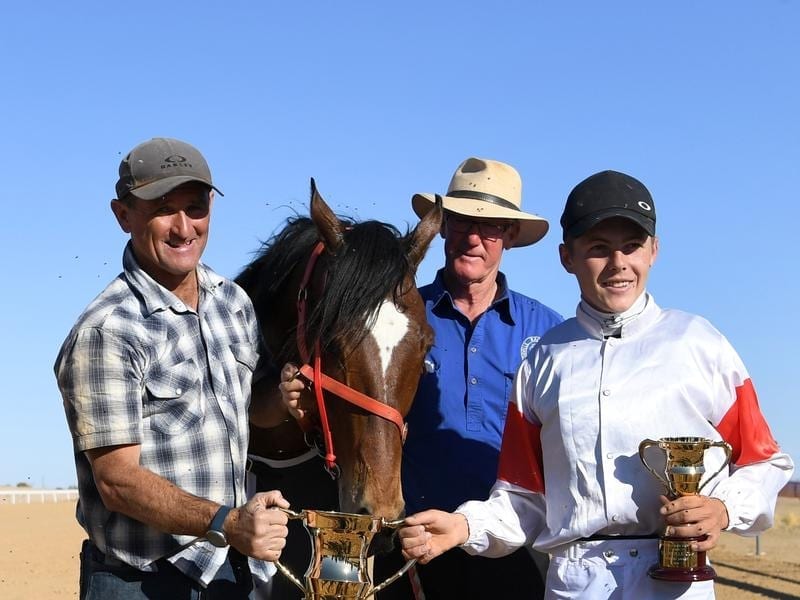 Trainer Bevan Johnson (l) has again qualified the prolific Fab’s Cowboy for the Battle of the Bush.

Prolific winner Fab’s Cowboy is the first horse into the 2019 Battle Of The Bush final and has taken a further step towards another record with his win at Gladstone.

The gelding brought up his 29th career win and his seventh this season when he won Saturday’s Qualifier Open Sprint Plate (1194m).

The win took him to equal second on the Australian list of winners for the season and also helped him zero in on Sleep Walk’s modern day record of 34 wins on Queensland tracks.

Passion Moon holds the Queensland record at 113-1/2 wins but that was set almost 60 years ago.

Trainer Bevan Johnson was named the Queensland trainer of the month in March for Fab’s Cowboy’s efforts.

The seven-year-old won a qualifier at Cunnamulla 12 months ago before being well beaten in the final at Doomben last July.

Johnson said he was obviously keen to get revenge in the Battle of the Bush Final at Eagle Farm in June.

There are 16 qualifying heats at tracks from Mt Isa in the north to Goondiwindi in the south over the next two months.

The final is at Eagle Farm on June 23.