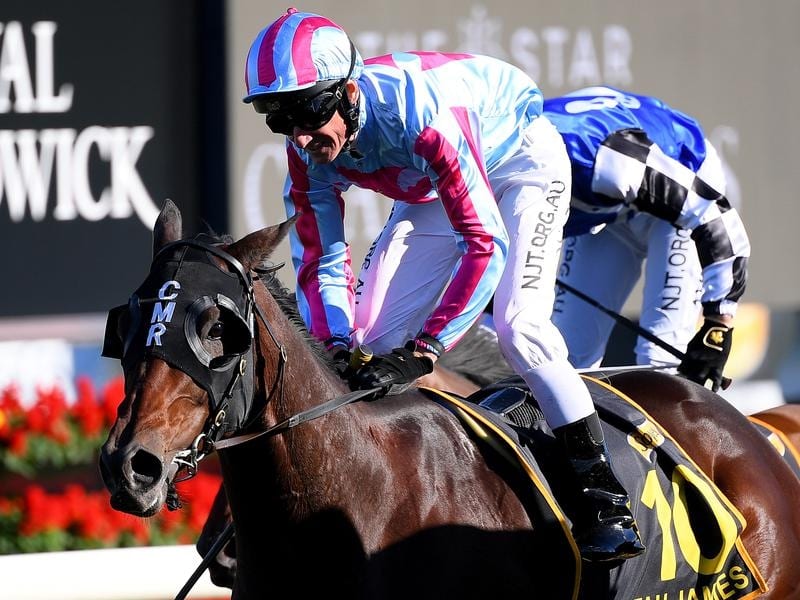 Etah James has upstaged her male rivals to win the Sydney Cup in a genuine staying test at Randwick.

Glen Boss considered her his best long-shot ride in a Group One race and Etah James has proven him right, upsetting her more fancied rivals to win the Sydney Cup at Randwick.

Making her debut for co-trainers Ciaron Maher and David Eustace, the well-travelled mare has spent most of her career in Victoria with Matt Cumani before a brief stint with part-owner and New Zealand trainer Mark Lupton.

Transferred for a Sydney Cup campaign, Etah James has proven the superior stayer in Saturday’s stamina-testing edition of the 3200-metre race.

The victory gave Boss back-to-back Group One wins after he took out the Australian Oaks on Colette and while he feared English visitor and favourite Young Rascal, he had genuine confidence in Etah James.

“I’ve been riding work and I trialled her here in a very fast trial and I said, ‘this is just flying this thing’,” Boss said.

“Her work on Tuesday was exceptional actually and I said to Ciaron this morning, this will be the best 30-1 shot I’ll ever ride in a Group One race.

“I wasn’t expecting to beat the English horse to be really honest but I was expecting to run one, two, three.”

The win ended a 16-year Sydney Cup drought for Boss who last won it in 2004 aboard champion stayer Makybe Diva, who sandwiched it between the first two of her three Melbourne Cup wins.

Etah James did not give him quite the same feeling, but she was game.

“Most of them were off the bridle and chasing at the 600 and mine was still coming up underneath me and I thought, I’m going to run very well,” Boss said.

Boss’ assessment of the sectional time was not far wrong, Etah James ($14) running her last 600-metres in a dour 38.66 seconds to score by a long head over The Chosen One ($18) with another half-length to Raheen House ($6).

The $2.60 favourite Young Rascal did not appear to see out the distance.

Maher said Etah James’ light weight and a great ride by Boss was the perfect recipe for Sydney Cup success.

“She is a genuine two-miler,” Maher said.

“When they get down to those weights over trips like that, anything is possible.

“Glen is in elite form and gave her a peach of a ride, and it came down to a head margin

“She was ridden perfectly and everything panned out the right way.”