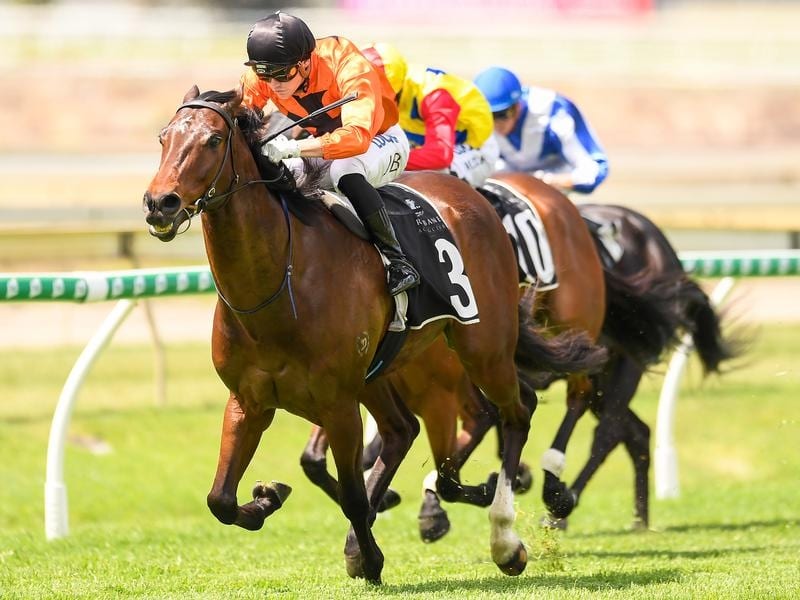 Apprentice Jake Bayliss rode Pleased to victory in the Gallopers Membership $1 at Doomben.

Spring carnival plans remain unresolved for Eric The Eel after his unlucky defeat at Doomben.

Heavily backed with TAB Fixed Odds from an opening quote of $5.50, the gelding officially started the $2.70 favourite for the benchmark 70 on Saturday but had to settle for an unlucky third to Mr Storm after missing the start when ridden by apprentice Baylee Nothdurft.

“Baylee said he was bouncing up and down in the gates before they opened, which caused him to miss the start,” trainer Stuart Kendrick said.

“Near the 600m he was reluctant to take a gap so Baylee had to come right around them and I thought to myself he’ll be doing well to get with three lengths of them.

“In the end he’s only been beaten about a neck so his run was enormous.”

Kendrick will let the dust settle before announcing where he aims the three-year-old for the remainder of his campaign.

“If he won today I was going to throw him in the Caulfield Guineas. I still might,” he said.

“The other option is to keep him up here and look at the summer staying series for the three-year-olds including the Grand Prix.

“There’s also the Carbine Club at Flemington on Derby Day so there’s a bit to think about.”

“You had to forget last start. It was a bit of a nothing ride from me. I stuffed up the first half of the race but his last 400m was a good effort,” Bayliss said.

“We were confident coming into today and Stephen was very bullish about the horse getting every bit of the trip even though it was his first go at it.”

Bayliss and Lee have forged a formidable association on southeast Queensland tracks in recent weeks.

“Stephen has been the number one man for me since I joined the Queensland riding ranks,” Bayliss said.

“He’s always looked after me and put my name up in lights.”