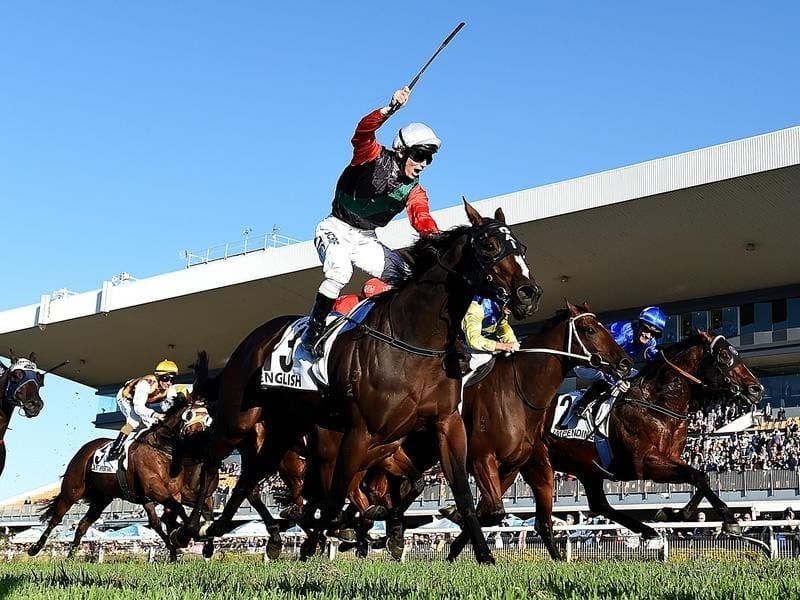 Jockey Tim Clark has produced a ground-saving ride to win the Group One Doomben 10,000 on English.

Jockey Tim Clark chartered a path that was supposedly a no-go zone to set English on the path to the $13 million The Everest with a win in the Group One Doomben 10,000.

Most jockeys had declared the inside of the Doomben track as the least preferable path, but Clark steered English ($11) up the inside to beat the fast-finishing Impending ($12) by a long head in the $700,000 race.

English gave Clark his second Doomben 10,000 after winning on Hot Danish in 2010 and it was Gai Waterhouse and her training partner Adrian Bott’s first win in the race.

Waterhouse’s father Tommy Smith holds the record for the Doomben 10,000 training wins with six but she wasn’t on course to see her first victory in the race.

Bott and Waterhouse have proved a lethal combination in recent years and it was their fourth Group One as a partnership which is in its second full season.

It completed a good two days for Waterhouse, Bott and Clark as they combined to win the Scone Cup on Friday with Sedanzer.

Bott said English had proved a strong part of their partnership’s success.

“She won the All Aged Stakes for us and right from when she ran in the Golden Slipper she has performed well for us,” Bott said.

“We were very confident today because she had done so well since the sixth in the TJ Smith in the autumn.”

English took her prize money past $3.4 million but Bott is confident there is a lot more to come.

“She is entered for the Group One races here the Kingsford Smith, the Stradbroke and the Tatts Tiara. But we are also looking at getting her ready for The Everest in the Sydney spring,” Bott said.

Clark rode English in her first barrier trial three years ago but hadn’t been back on her in competition before the Doomben 10,000.

Clark said English had a dynamite turn of foot.

“I was able to get onto Redzel’s back and she was really strong at the finish,” Clark said.

Impending turned in an outstanding Stradbroke Handicap trial coming from well back.

Kerrin McEvoy said Redzel had run well and was beaten only a half length after being attacked in the lead.

“He gave a good kick in the straight but was beaten by a couple of better horses on the day,” McEvoy said.