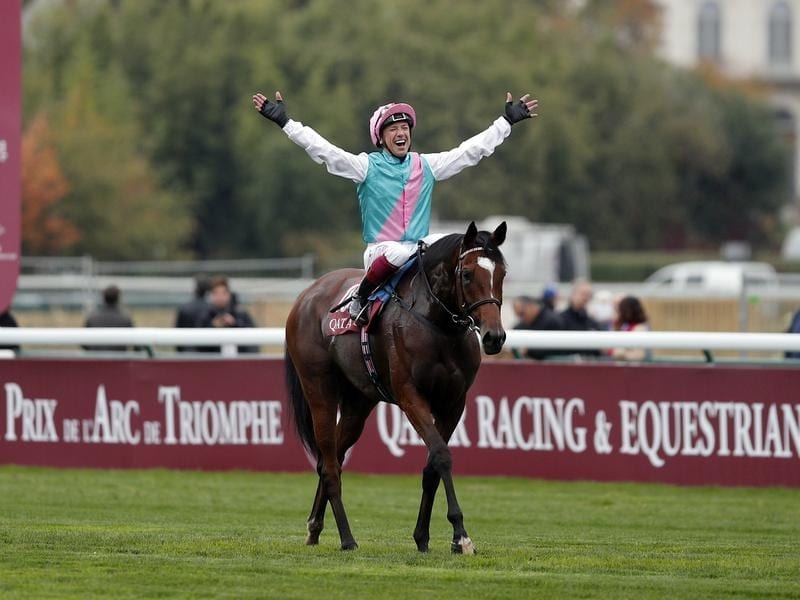 Enable has won the Yorkshire Oaks on her way to her bid for a third Prix de l’Arc de Triomphe.

Frankie Dettori has seen plenty in his long and illustrious career, but even he has been reduced to tears after Enable won her 10th Group One race in the Yorkshire Oaks.

The undoubted star of the past three Flat seasons, the John Gosden-trained five-year-old has proven her versatility over 10 furlongs (2000m) and 12 and won in England, Ireland, France and America.

Her only defeat in 14 races to date – with one more to come barring accidents – was on her three-year-old return at Newbury behind stablemate Shutter Speed.

Thursday’s race was her British swan song, because her whole campaign this year has been built around winning the Prix de l’Arc de Triomphe for a third time, something no horse has ever done.

Dettori could not hide his emotions.

“It’s embarrassing crying on TV, but I was crying with happiness!” he said.

“She felt great and she’s had a great send-off in front of the English people.

“I was always in control today. The temptation in the past on her has always been to kick a bit too soon but today I thought I’d let Ryan (Moore, on Magical) come to me before I kicked.

“When I gave her a little tap she put her head down, and I knew then I’d won.

“In fairness we wanted an exercise canter. But Magical made a race of it, because she’s very solid.

“This year we’ve had a better preparation for the Arc. But we’ve still got seven weeks, so it will be sleepless nights until then.

“It’s amazing, because she had a hard race in the King George and she was a bit tense today because of the crowd, but in the race she was fantastic.

“She’s uncomplicated. She has a great presence and a massive engine. I love her.

“I’ve never ridden a horse like her in my life. To have her longevity is incredible. Golden Horn was a great horse – but I only had him for a year.”

For Gosden, the race could not have gone better.

“We discussed it. She was drawn one, and there was no point complicating it and disappointing her. We should let her go and do her own thing,” Gosden said.

“Magical came to her, but she found a lot in the last 400 metres. To that extent she showed her class and it was a good performance.

“She’s not a filly that likes to be let all the way down, so between the King George and the Arc was too big a gap. She prefers to be let down a little and then brought back up for a race.”