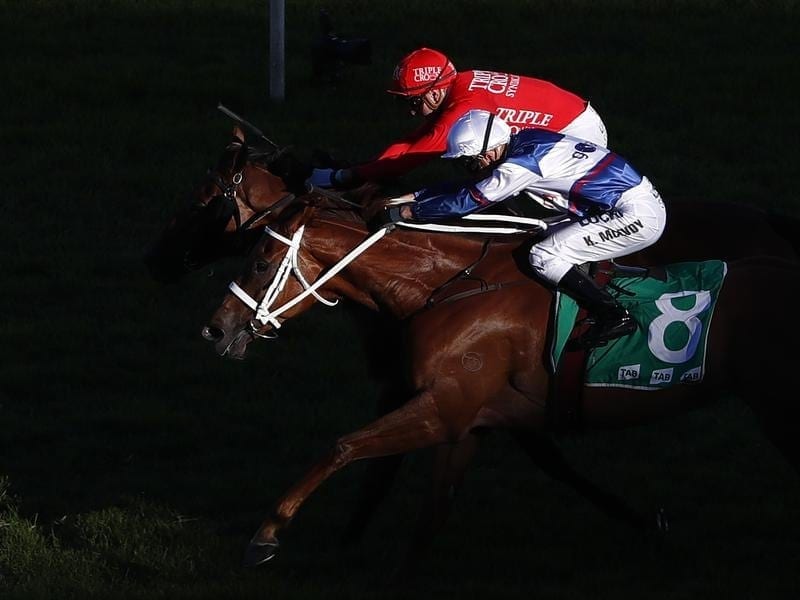 Emperor’s Way (red) steps up to a suitable 1800m in the Premier’s Cup Prelude at Rosehill.

A step up to a suitable distance looms as the key to emerging stayer Emperor’s Way making an impact for the first time this preparation in the Premier’s Cup Prelude at Rosehill.

Emperor’s Way rose through the grades with five wins from seven starts last preparation including four victories in a row between January and March before going for a spell.

The gelding gets to that distance range for the first time this preparation in Saturday’s $100,000 race.

Despite him not figuring in the placings in the Listed Winter Stakes (1400m) and Listed Winter Challenge (1500m), co-trainer Peter Snowden is confident the gelding has shown enough over the shorter distances to predict he is ready to fire third-up on Saturday.

“He’s ready to do something now,” Snowden said.

“His first two runs have been great. They have been runs to sort of get him ready for this 1800 metres.

“You should see him start to put his hand up on Saturday, I would think.”

Emperor’s Way, to be ridden by Andrew Adkins, is at $9 in an early market with last-start Winter Challenge winner Mister Sea Wolf favourite at $3.80.