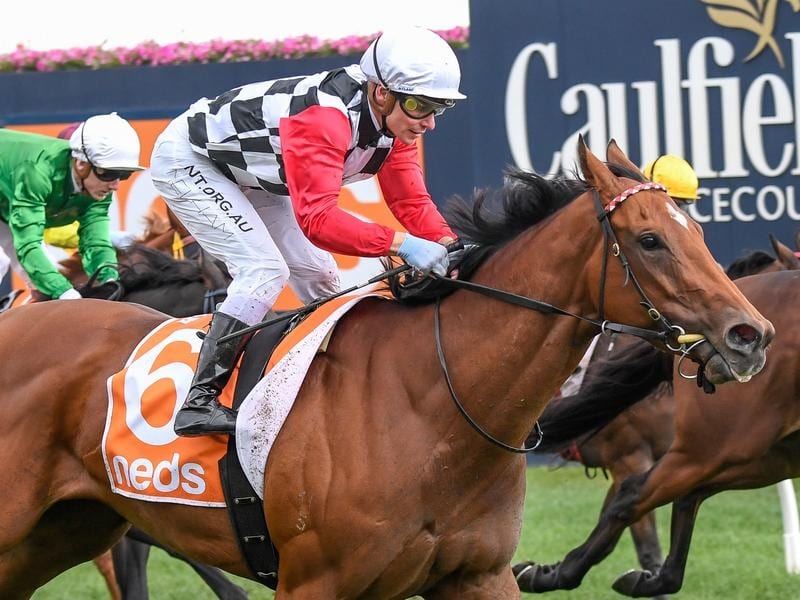 Diamond Effort charged home in the straight for a half-length win in the Lamaro’s Hotel Handicap.

Winning four races on the trot has come at a cost for the connections of Diamond Effort, with the mare heading for an enforced break following her latest win at Caulfield.

The Clinton McDonald-trained mare landed her fourth win in succession but bled from both nostrils in winning Saturday’s Lamaro’s Hotel Handicap (1000m), incurring an automatic three-month ban from racing.

Diamond Effort began her campaign with wins in restricted grade at Caulfield and Flemington earlier in the autumn before taking out the Listed Hareeba Stakes (1200m) at Mornington on March 21.

After those victories, McDonald was planning a tilt at the Listed Wangoom Handicap (1200m) at the May Warrnambool carnival.

But with uncertainty over how long racing continues because of the coronavirus pandemic, McDonald had tweaked the program of Diamond Effort to take in Saturday’s sprint.

And immediately after Saturday’s success, McDonald was hoping to be back at Caulfield in a fortnight’s time to contest the Listed Bel Esprit Stakes (1100m).

“Her brother (Second Effort) became a group winner as a four-year-old and I think she can do the same.”

Despite the switch back in distance from 1200m to 1000m, Diamond Effort was sent off the $3.50 favourite under Ben Melham and charged home in the straight to record a half-length win from Ashlor ($7), with Fine Dane ($11) a length away third.

“I’m rapt for the owners, Dominic Romanelli and the crew,” McDonald said.

“Obviously it’s very hard for all of the owners not to be here and enjoy success but at least we’re still going and they’re collecting prize money.”

Melham was full of praise for Diamond Effort after the mare was slow to begin and then got into an awkward position on the turn.

“I thought it was going to be a bit messy there for a bit,” Melham said.

“I had to over-travel coming into the corner and was in a position around the corner that I didn’t want to be in.

“Thankfully she was going good enough and I was able to work into the clear.”