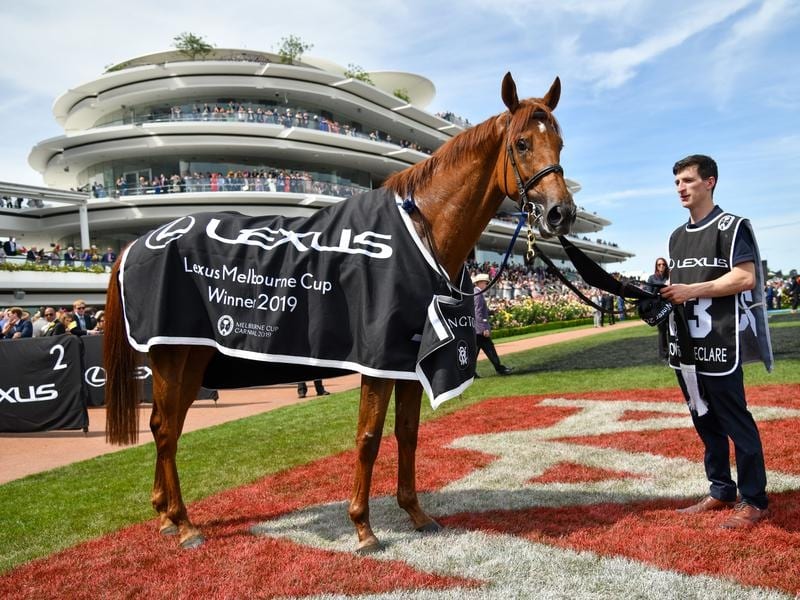 Melbourne Cup winner Vow And Declare has featured in an exhibition gallop at Geelong races.

Melbourne Cup winner Vow And Declare has shaded his younger stablemate Russian Camelot in a gallop between races at Geelong.

Cup winning jockey Craig Williams made a special trip to Geelong on Wednesday to ride Vow And Declare while Damien Oliver, who rode a winner earlier on the Geelong program, partnered Russian Camelot.

Williams was taken with the way Vow And Declare was able to adapt in leading out Russian Camelot in the gallop.

“I just loved the way he was able to do things a lot better,” Williams told broadcaster racing.com.

“I was really happy with his maturity that he was able to lead up the gallop, he felt really good and most importantly when he pulled up he wouldn’t blow a candle out.

“He’s keeping to the norms of how I know him and his action felt nice and smooth.”

Williams said there might be enough time to run in the Australian Cup (2000m) at Flemington on March 7 before Vow And Declare heads to Sydney for the Queen Elizabeth Stakes and then further north to Queensland.

Vow And Declare ran second in the Queensland Derby before winning the Tatt’s Cup in Brisbane last year, winning the Melbourne Cup at his third run back from a break.

“He is an amazing athlete so there is no point running him over short trips where they will outsprint him,” Williams said.

“The way he has handled this, leading up, he has really come on.”