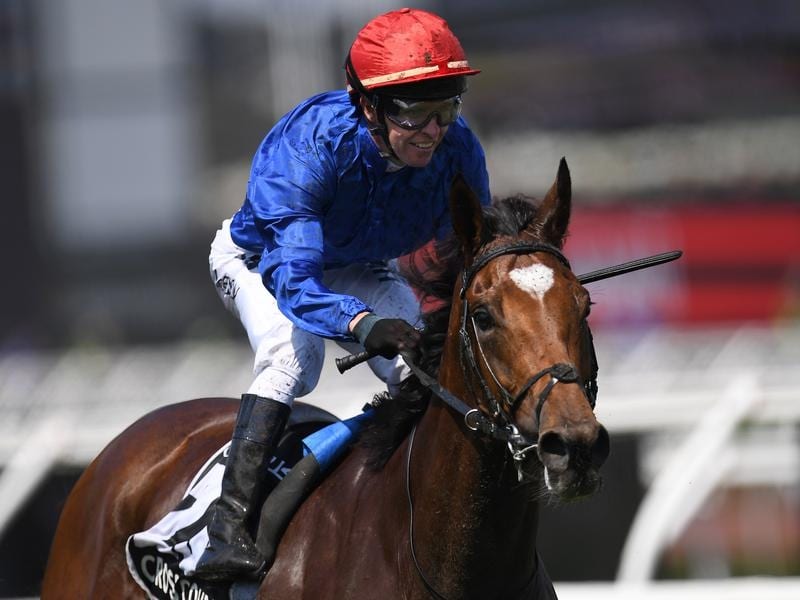 Melbourne Cup winner Cross Counter is on target for the Ascot Gold Cup at the Royal meeting.

All is in readiness for Melbourne Cup winner Cross Counter to clash with Stradivarius in the Gold Cup at Royal Ascot.

The Charlie Appleby-trained four-year-old beat Marmelo from the Hughie Morrison stable in a famous finish to the race in November.

The Charlie Fellowes-trained A Prince Of Arron ran third to complete an English-trained trifecta.

Cross Counter has had one start since, winning the Dubai Gold Cup (3200m) at Meydan in March.

Appleby supervised the gelding in work on Saturday morning.

“I was pleased with that. His preparation has gone well, and the plan is to head to the Ascot Gold Cup,” he said.

“It’s going to be a step up in trip (4000m), but on the evidence of what we saw on his last start there is no reason why it shouldn’t suit – and potentially see a bit more improvement to come.”

The victory at Meydan means Cross Counter is eligible to bid for the Weatherbys Hamilton Stayers’ Million – a bonus claimed last year by Stradivarius.

After winning one of eight qualifying races, the huge pot can be secured if a horse lands the Gold Cup at Ascot, the Goodwood Cup and finally the Lonsdale Cup at York.

“If he sees it out, then the focus will be those Cup races – at Goodwood, then on to York. If he doesn’t, then we could potentially look at having another crack at the Melbourne Cup.

“They all had a break after World Cup Night, and we have been building him up since he arrived back in the UK. I’m confident going straight to Ascot with him, because we saw what he can do off a long lay-off in Dubai in the Gold Cup there on his first start back.

Appleby will make a decision in the next few days on the Royal Ascot target for 2018 Derby winner Masar who also galloped at Newmarket on Saturday.

Masar has not raced since the Derby after suffering a leg injury in the lead-up to the Eclipse Stakes.

Appleby said Masar would gallop again on Wednesday after which the team would decide which race to target.