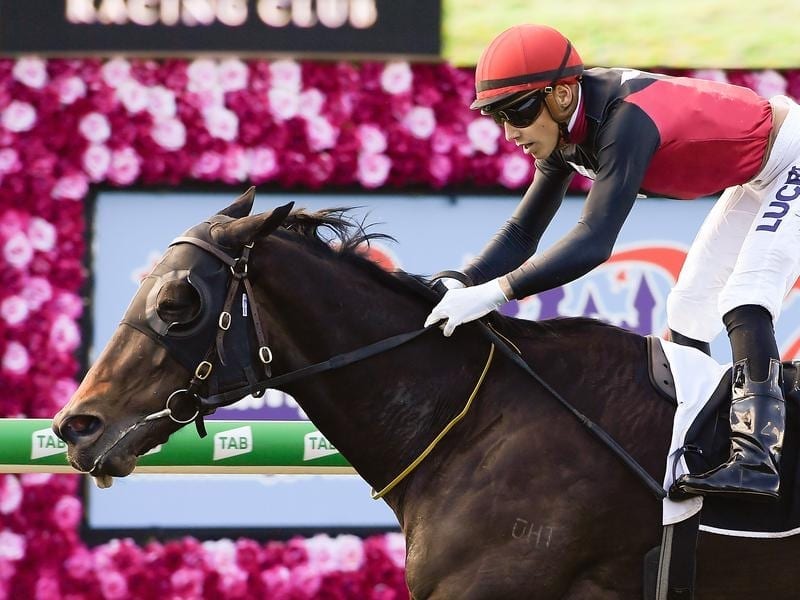 Manaya can earn another season on the racetrack if she continues her winning ways at Eagle Farm.

Gold Coast trainer Michael Costa welcomed a baby son this week and he hopes the good news continues on Saturday.

Costa is one of the up-and-coming trainers in Queensland having already got nearly 200 winners in his five-year career.

He has built a strong team on the back of some smart horses including Manaya who is favourite for the Ascot Plaza Handicap (1400m) at Eagle Farm.

Manaya was recently sold in an online auction to the Glenlogan Park Stud which is an indication of her ability.

Glenlogan, for decades one of Queensland’s biggest studs, has had a change in direction and now concentrates much of its business on quality mares.

“They target top-quality stock and obviously think she is up to that standard,” Costa said.

Costa was thrilled when Glenlogan elected to keep Manaya in training with him.

“There are a lot of trainers around and I am sure they would love a mare like Manaya,” Costa said.

“She will eventually go to stud but when is up in the air.

“It probably depends on how she goes this Saturday. If things go well I hope to get the green light for her to race on for another season.”

Costa has had a big opinion of Manaya since before she raced.

He took her to Scone for her first start where she won the 2016 Listed Woodlands Stakes.

Since then Manaya has generally raced in top company and was far from disgraced in three black-type races in the winter.

However, she is best remembered for winning a race at the Gold Coast when her rein broke and she ran to the outside fence but was still far too good.

Manaya appreciated a drop back in class when she won her last start at Eagle Farm in open company and meets a similar field.

“She is up a bit in weight and has a tricky draw but she seems to like Eagle Farm,” Costa said.

Apprentice Jag Guthmann-Chester has been Manaya’s regular rider but he has moved to try his luck in Sydney.

Senior jockey Robbie Fradd has the Manaya ride on Saturday and will also be on Seetoomany in the One Fifty Ascot Bar Handicap for Costa.

A happy family man, including newborn Hugo, Costa is firmly entrenched on the Gold Coast.