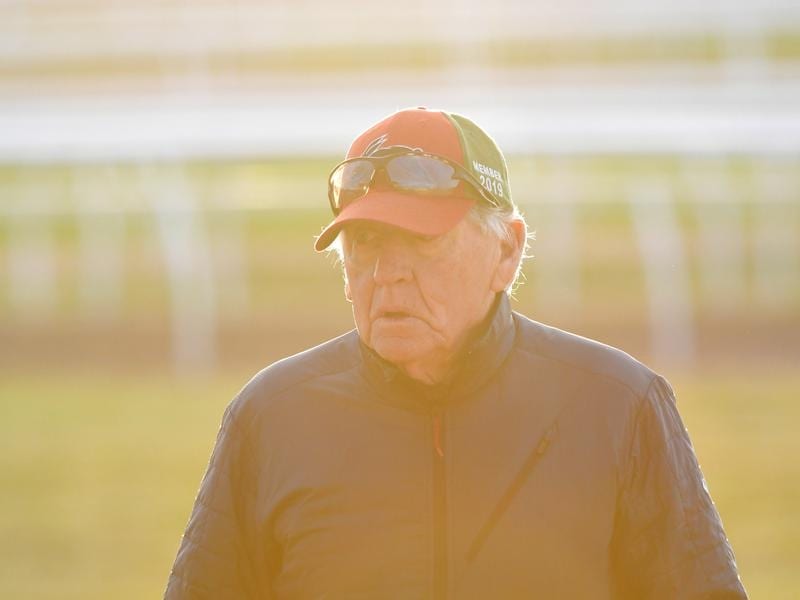 Trainer Les Bridge already has his Everest hopeful Classique Legend up and running for the spring.

Les Bridge had cleaned out the stable, said his goodbyes and wondered if he would ever put a bridle on another horse as good as Classique Legend.

The four-year-old was all but on a plane to Hong Kong, the homeland of his owner Bon Ho who planned to continue the horse’s burgeoning career in the Asian racing hub.

A Randwick training icon, Bridge has won a Golden Slipper with Sir Dapper, a Melbourne Cup with Kensei and Group One races with a host of topliners including Hot Danish.

But as an octogenarian and with a boutique string of 18 racehorses, Bridge knew the chances were minimal of another Classique Legend coming along.

Then he took a call from Ho’s Australian manager, Carmel Size, telling him to clear out a stable because Classique Legend’s Hong Kong move was off.

“I didn’t think I would see him again,” Bridge said.

“They put him into quarantine and there was some hiccup and I finished up getting him back.”

The timing of events meant Classique Legend missed the autumn and not racing him until the spring was unfeasible.

So the gelding has been back in work with Bridge for eight weeks, stepping out in a Canterbury barrier trial on Friday and trouncing his opposition.

The hit-out was a chance to blow out the cobwebs and see where the horse’s fitness levels were at with a view to giving him at least one start in the coming weeks.

It is an unorthodox preparation but a necessary one if Classique Legend is to fill Ho’s Everest slot in October.

“The break was too long if I didn’t do something with him,” Bridge said.

“You can’t win an Everest having almost 12 months in between.

“We might just give him one or two runs and get him ready for the Everest.”

The Listed Bob Charley AO Stakes (1100m) at Randwick on Saturday is a possible option for Classique Legend, who Bridge says has returned “bigger and stronger”.

The horse’s Everest quest will ensure Bridge continues to train into another season, 60 years after he first took out his licence.

He has not ruled out retiring one day. But not yet.

“l’ll just see how I go. I will know when it’s time but not at the moment,” Bridge said.

Bridge has an Everest to win.