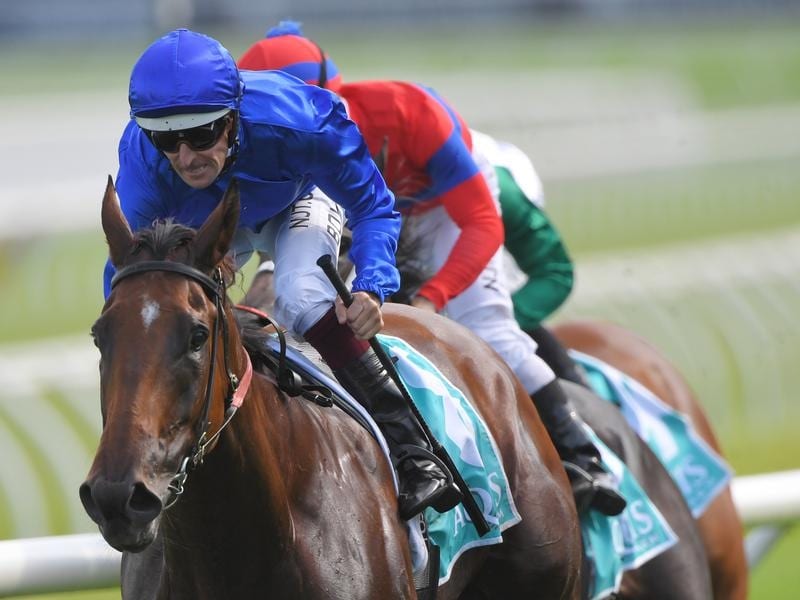 Triple Group One winner Alizee is not in the same stratosphere as Winx but she has been able to deliver jockey Hugh Bowman another Apollo Stakes win at Randwick.

Bowman, who has won the race seven times, has made the Group Two feature his own in recent years winning three of the past four aboard Winx and Saturday’s edition on Alizee.

Alizee has been fizzy in the past but Bowman says she has relaxed this preparation, giving him the confidence to park her on the heels of the leaders.

She proved too strong for Dreamforce, scoring by a short neck with Happy Clapper another 1-1/4 lengths away.

“She is a lot more settled now and she showed that first up so I wasn’t afraid to let her be where she was comfortable,” Bowman said.

“She gave me the confidence to ride her where she was happy and from barrier one that put her in the gun spot.

“I think the two best horses at that trip fought it out.”

Alizee had been in doubt to run until race morning with trainer James Cummings concerned about a wet track.

He revealed he agonised over the decision.

“We were really 50-50 on whether we wanted to run on a soft seven. We deliberated over it very carefully,” Cummings said.

“I pestered (track manager) Nevesh Ramdhani all week, I even rang the jockey who did the race day gallop this morning, Sam Clipperton, and he gave me a blow-by-blow account.

“She has come back and delivered against some very strong weight-for-age horses.”

The mare remains in the mix for the All-Star Mile in Melbourne while Cummings is considering two Sydney options, the Chipping Norton Stakes (1600m) on February 29 and Canterbury Stakes (1300m) a week later, both at Randwick.

Alizee gave the Cummings-Bowman combination its second Group Two win of the afternoon after they combined to take out the Light Fingers Stakes with Flit.

Bowman also collected a benchmark race aboard the Chris Waller-trained Matowi and was happy to be warming into form heading into the autumn.

“I rode without much success over the summer months so it is nice now the good horses are back they’re starting to run for me,” Bowman said.

John Thompson was satisfied with the return of Dreamforce given Alizee had race fitness on her side while Tommy Berry said Happy Clapper was on target for the Chipping Norton next start.

“I was rapt. It was a bit of a sit and sprint and that suited the horses with a turn of foot,” Berry said.