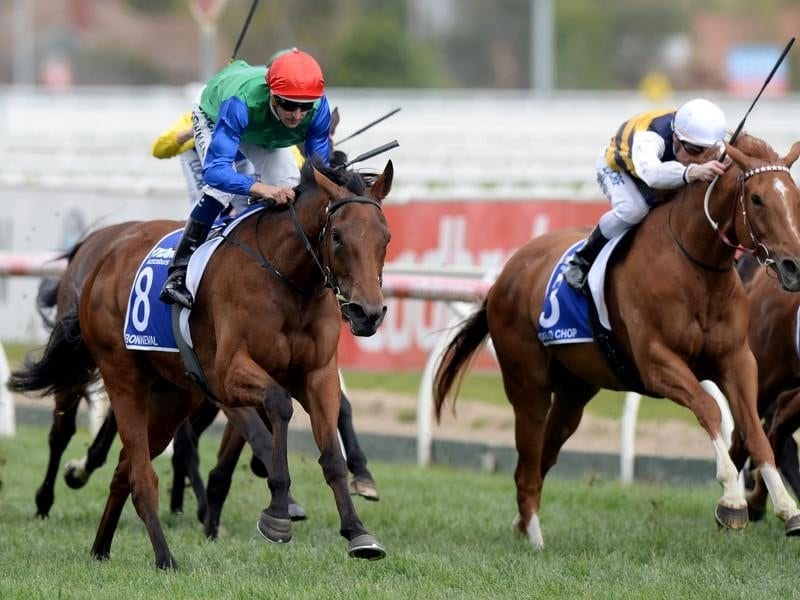 Hugh Bowman (red cap) on Bonneval, winner of the Group One Underwood Stakes at Caulfield.

New Zealand mare Bonneval has joined Humidor at the head of Caulfield Cup betting following her win in the Underwood Stakes at Caulfield.

Sunday’s victory gave trainer Murray Baker, who now trains in partnership with Andrew Forsman, his fourth victory in the Group One race over 1800m.

Ridden by Hugh Bowman, Bonneval ($4.20) scored by a length from the well-backed $2.10 favourite Hartnell with Gailo Chop ($12) a short head away third.

The Underwood was Bonneval’s seventh win from 10 starts with her past six in succession, all in Group company.

Included in those victories were Group One wins in the New Zealand Oaks and ATC Australian Oaks, both over the Caulfield Cup distance of 2400m.

Bonneval is the $6 equal favourite for the Caulfield Cup on October 21 with Baker and Forsman potentially having three starters in the race.

Jon Snow, a winner at Moonee Valley on Friday night is comfortably in the line-up while Lizzie L’Amour is 29th in the entry order with a chance to make the 18 plus four emergencies field.

Baker said he was concerned the track may have been too firm for Bonneval on Sunday.

“We didn’t know what to expect today being second-up,” Baker said.

“She’s still got a bit of her winter coat to lose but we thought she’d improved on her last start.

“She relaxes and she can stay. My worry today was she might feel the ground.”

Baker said Bonneval would go to the Caulfield Stakes on October 14 before the Caulfield Cup, a ploy the trainer has previously used successfully.

Mongolian Khan ran third in the weight-for-age 2000m event before winning the Cup a week later in 2015.

Bowman says the mare will be hard to beat in the Caulfield Cup but with 52.5kg, she will be running with another jockey.

“She was a dominant winner of the Oaks and is a genuine Cups contender,” he said.

“I just wish I was light enough to ride her.”

While disappointed not to win, Godolphin trainer James Cummings was happy with the performance of Hartnell.

“He is a stayer and I think we’ve got to be pretty happy with where he is at.”