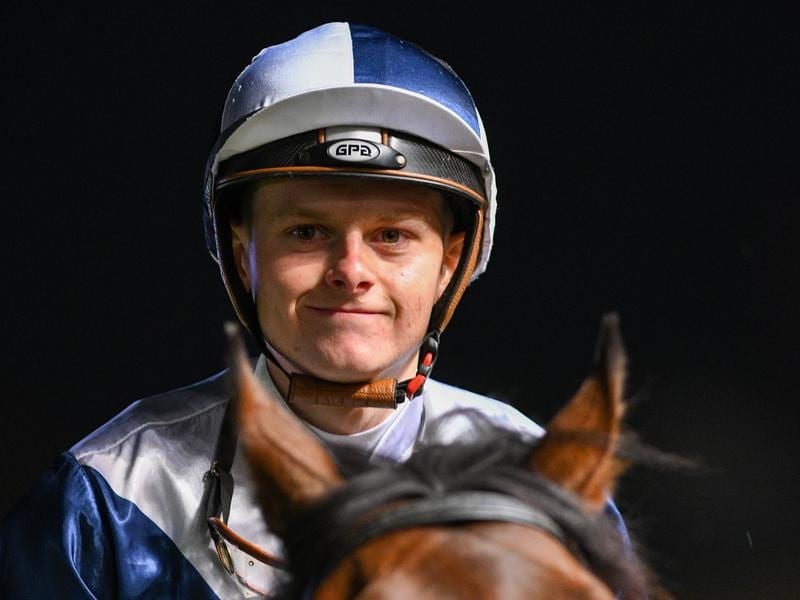 Ethan Brown will ride Albury Cup-bound Perfect Illusion when he races at Sandown.

Having watched the success of European stayers in Australia, Albury trainer Mitchell Beer has jumped on the bandwagon, but with a different target.

While his counterparts dream of success in races like the Melbourne Cup, Beer has his sights on capturing his hometown Cup next month.

Beer went to England last July and bought Perfect Illusion at the Tattersalls Sale at Newmarket on the recommendation of New Zealand bloodstock agent Paul Moroney.

Perfect Illusion begins his Albury Cup campaign in the Ladbrokes Odds Boost Handicap (1600m) at Sandown on Wednesday when he will be ridden by Ethan Brown.

“There’s such good prize money in these country Cups and there’s a lot of them around,” Beer said.

Beer, who moved from Mornington in Victoria to Albury in NSW 18 months ago, said Perfect Illusion had endured a lot in his brief time in Australia.

The trainer put the gelding straight into work after he arrived in spring and has had to clip Perfect Illusion twice because of the weather.

“He’s experienced weather that he would never have seen in his life,” Beer said.

“He came here with a summer coat when the rest had winter coats and he grew his when it was 46 degrees, so he’s had a bit of a fun time acclimatising.”

Beer said he was originally going to wait before starting Perfect Illusion but after a solid trial performance he put him in the Snake Gully Cup at Gundagai in November.

Perfect Illusion finished 10th and was immediately sent for a spell.

“One got loose in the mounting yard at Gundagai,” Beer said.

“We were stuck in there and he just melted and had run his race before the start, so we put him out straight after that and I think he’s gone terrific this campaign.

“His two trials have been really good and I’ve seen a massive improvement in the horse from last prep to this prep.

“I think the trip down to Melbourne will help him and the mile on the big track will be plus, as will the small field which will allow him to find his feet as they won’t rip along early.”