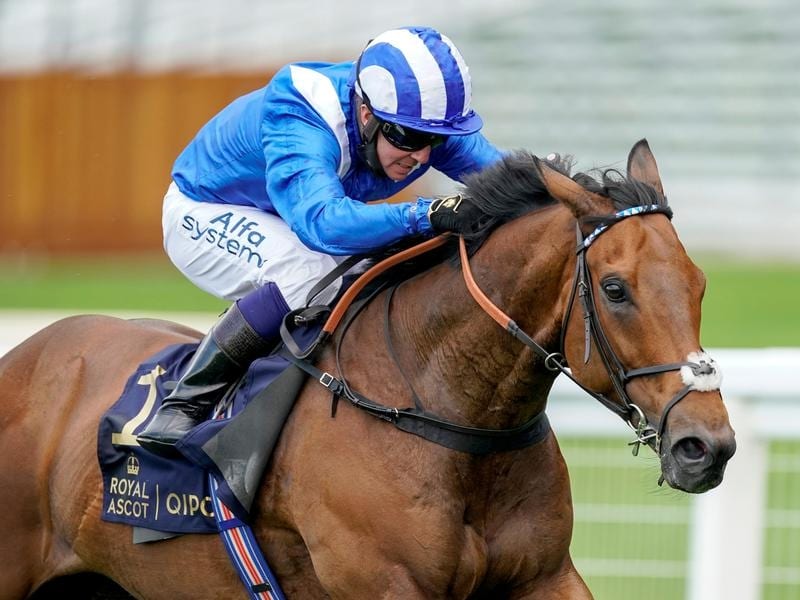 Battaash, ridden by Jim Crowley, won the King’s Stand Stakes on day one of Royal Ascot.

Battaash has underlined his status as one of the world’s best sprinters after sealing a first ever Royal Ascot success with a superb victory in the Group One King’s Stand Stakes on Tuesday.

It was the third time the Charles Hall-trained six-year-old has attempted to win at the Royal meeting after failures in his previous two appearances.

Underneath Jim Crowley, Battaash went off at odds-on favourite in a race that was dominated by Australian horses between 2003 and 2009 with victories by Choisir, Miss Andretti, Takeover Target and Scenic Blast.

Any lingering doubts about the enigmatic bay gelding were dashed as he stormed home in 58.64sec – the fifth fastest time in the 48-year history of the 1000m race.

Ryan Moore took out the opening Group One of the day, riding Aidan O’Brien’s Circus Maximus to a thrilling victory over Terebellum to win the Queen Anne Stakes.

The four-year-old was ridden prominently by Moore throughout and then showed plenty in reserve to chase down the fast-finishing Terebellum under Frankie Dettori to win on the line.

“He’s very tough, he quickened and then toughed it out, it’s unbelievable really. Ryan gave him a brilliant ride,” said O’Brien who has now won the race four times.

“He’s a very good horse and has a great pedigree. He has pace, he’s tough and he’s brave. He’s a trademark Galileo with loads of speed.”

It was a day to remember for former British champion jockey Crowley, who rode a hat-trick of winners.

Crowley got off to a flying start with $14 shot Motakhayyel taking out the Buckingham Palace Handicap in the opening race of the day which was run behind closed doors for the first time in the event’s 309-year history.

Crowley also saluted in the Group Two Duke Of Cambridge Stakes for fillies and mares on board Nazeef for John Gosden.

Gosden earlier chalked up his 50th winner at the Royal meeting when Frankly Darling, a daughter of Frankel, cruised to victory in impressive manner in the Ribblesdale Stakes in the hands of Dettori.

O’Brien’s red-hot favourite Mogul disappointed by finishing fourth but Pyledriver was given a dream ride by Dwyer who made his move at the top of the straight and stormed home to win by two lengths.

The final race of the day, the Ascot Stakes, was won by $16 chance Coeur de Lion, trained by Alan King.