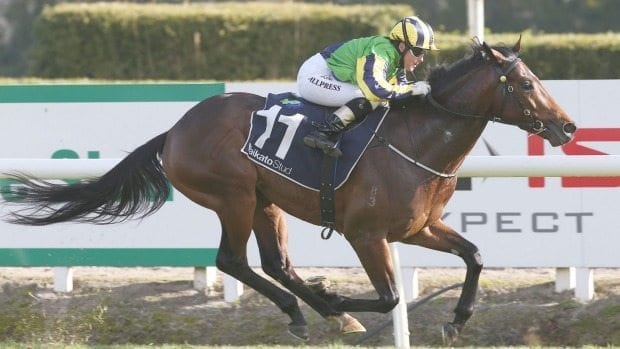 NEW Zealand trainer Murray Baker doesn’t bring a horse to Australia without it being a winning chance and Saracino justified that policy at Flemington on Saturday.

The three-year-old was having its fifth consecutive stakes-race start having won the Foxbridge Plate at Te Rapa last start in New Zealand and it controlled the tempo to win the Group 2 Danehill Stakes at odds of $6.70 with Sportsbet.

The son of Per Incanto landed on the speed down the Flemington straight and was never headed as jockey Damien Oliver nursed it along. The John O’Shea-trained Archives had a distinct size advantage, but Saracino dug deep and a possible Caulfield Guineas start could be on the cards.

“Very brave effort. He was in front a long way out, but he kept kicking all the way up the straight which is a good effort at Flemington,” co-trainer Murray Baker said.

“You’d like to think he could make the Caulfield Guineas, but he mightn’t be a miler, he might be a sprinter.”

Jockey Damien Oliver echoed those thoughts that it could be a sprinter, but believes it continue to mature into a nice thoroughbred.

“It was good. I’ve been on his back a couple of times in a trial and he showed a lot of raw potential. The penny hasn’t dropped with him yet,” Oliver said.

“You know if Murray brings one over they’re not here to make the numbers so you know they’re good.

“He always showed plenty as a two-year-old, but today he had his mind on the job,” Baker said. “He’s not a very big horse, he should get better with time.”

Archives stuck on well and will get better with the run under its belt. The disappointing run in the race was $3.20 favourite Defcon which never travelled on the inside of runners.