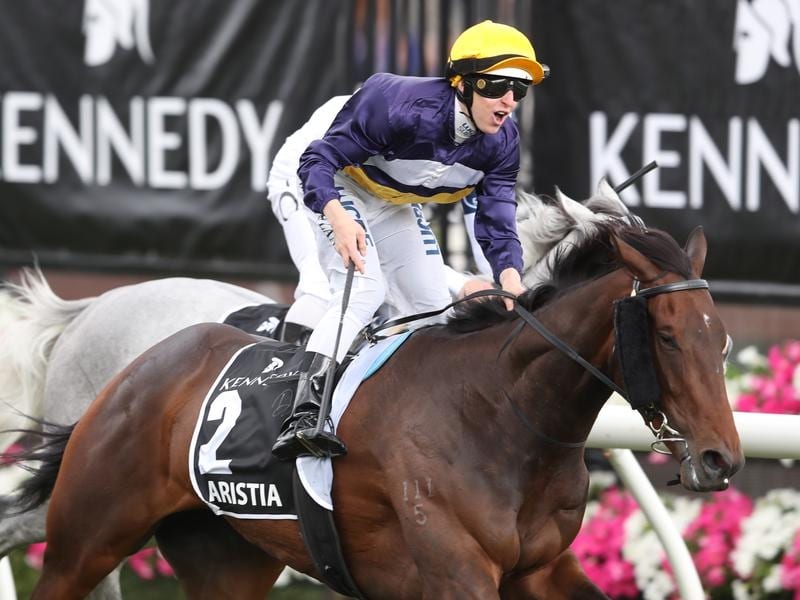 Four-year-old mare Aristia will aim for another Flemington Group One win in the Empire Rose Stakes.

A year after winning the VRC Oaks at Flemington, four-year-old Aristia is set for another of the Group One features during the Melbourne Cup carnival.

Trained at the course by Mathew Ellerton and Simon Zahra, Aristia runs in Saturday’s Group One Empire Rose Stakes (1600m) when she will be striving to register her first win since taking out the Oaks (2500m) 12 months ago.

Aristia won twice during last year’s Melbourne Cup carnival in the Group Two Wakeful Stakes and Group One Oaks and the Empire Rose is one of two scheduled assignments for her across this year’s four meetings, with Saturday week’s Group Two Matriarch Stakes (2000m) also on the agenda.

With Damian Lane missing Saturday through a careless riding suspension, Craig Williams will ride Aristia who has raced three times this spring over shorter distances, most recently when seventh in the Tristarc Stakes (1400m) at Caulfield.

“These two races, Saturday to Saturday, have been her target from a long way out,” Zahra said.

“Some people thought we chose the wrong race at Caulfield, running her in a shorter race, but we just wanted to keep a bit of freshness in her legs and she didn’t get a lot of luck.

“It was a pretty funnily run race and if you watch the replay she ran through the line nicely.

“She’s coming into this race just about ready to peak.

“And her form at Flemington is outstanding.”

The Jamie Richards-trained Melody Belle was the $3.40 favourite on Wednesday with Aristia, who has barrier one, at $13.