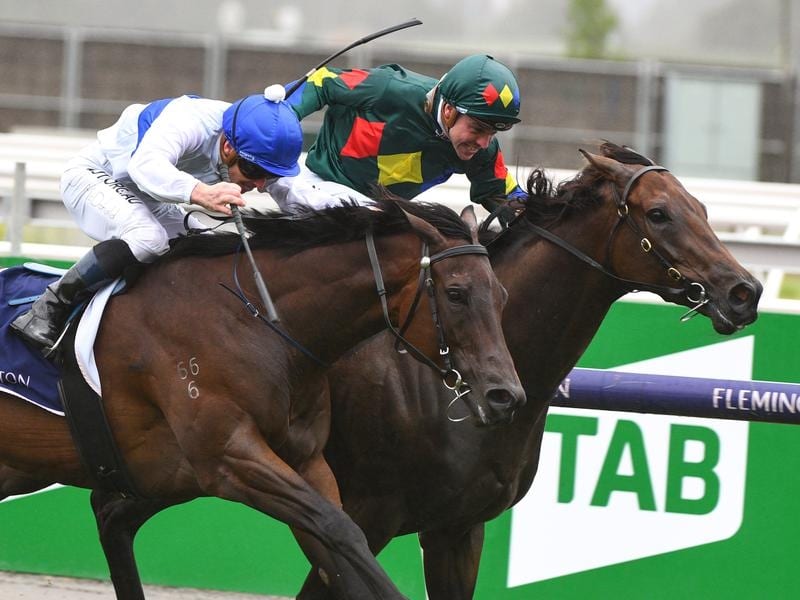 Alligator Blood (right) has edged out Catalyst in a memorable clash between the three-year-olds.

The clash between Queensland star Alligator Blood and New Zealander Catalyst has lived up to the hype with the pair staging a stirring duel down the Flemington straight.

Alligator Blood prevailed in Saturday’s Group three C S Hayes Stakes (1400m) to whet the appetite for a rematch in the Group One Australian Guineas in two weeks.

Alligator Blood’s trainer David Vandyke was beaming with pride after watching his stable star lead and fend off the challenge from Catalyst who sat at his girth early before the pair eye-balled each other for most of the home straight.

Alligator Blood, the $1.80 favourite, won by a short head.

“Well that’s what racing is all about,” Vandyke said.

“I looked up at the sectionals there and they were rolling before the corner.

“I thought ‘gee whiz he’s going to have to be good’.

“What about that. That will go down in history, that race will. The little Queenslander gets up off the canvas and comes back and does it.

“That was amazing. It was Australia and New Zealand. Fantastic.

“They are a couple of stars, those two.”

Alligator Blood has taken his record to nine wins and a close Caulfield Guineas second placing from 10 starts while Group One winner Catalyst suffered just his second defeat at his eighth start.

“They were going stride for stride and when he just got the edge that last 50 metres and showed his class, I thought ‘wow, that’s his best performance’,” Vandyke said.

Despite the narrow defeat, trainer Clayton Chipperfield takes plenty of positives out of it heading into the Guineas with Catalyst who he believes will be better suited at 1600m and meeting Alligator Blood 1kg better at the weights.

“I could not be disappointed with that,” Chipperfield said.

“We used this race to see if we’ve got the quality against these colts and geldings over here and he answered that question with ease, to be fair.

“My bloke just wanted it,” he said.

Chenier turned in a pleasing return in his first start for 10 months to finish only a length off Catalyst in third and is also Guineas-bound with trainer Anthony Freedman convinced there is improvement to come from the colt.