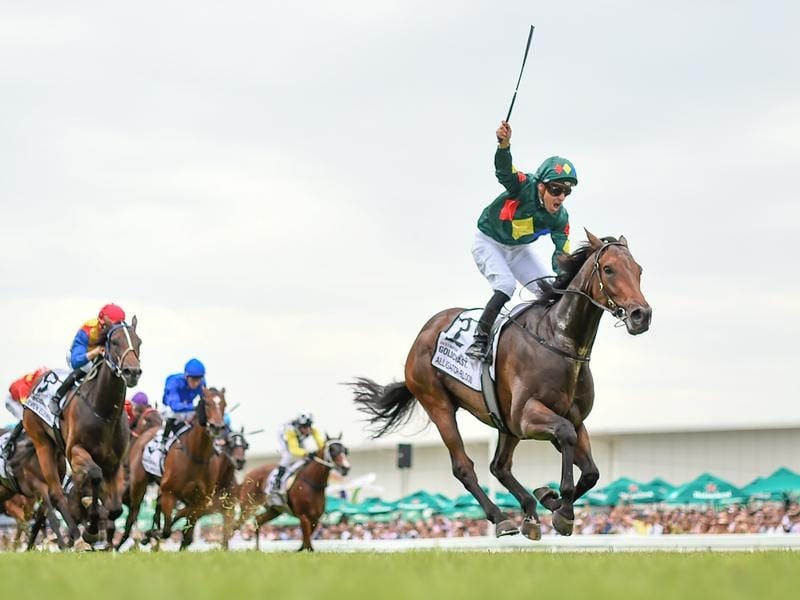 Alligator Blood has overcome a difficult trip to the races to win the Magic Millions 3YO Guineas.

It was meant to be.

Alligator Blood overcame a horror float trip to give trainer David Vandyke and Ryan Maloney career highlights when he demolished his rivals to win the $2 million Magic Millions Guineas at the Gold Coast.

A start in the Guineas was thrown into jeopardy for Alligator Blood several hours earlier when the float he was travelling in was delayed following an accident involving a truck on the M1, north of the Gold Coast.

A petrol tanker, laden with fuel, was tipped onto its side when it collided with two cars, throwing the float plans of many Gold Coast runners into chaos.

Among them was Alligator Blood who arrived at the racecourse accompanied by a police escort before stewards cleared him to start in the race.

If that was not enough, the start of the Guineas was delayed for several minutes when Leviathan broke through the barriers and galloped a lap of the course riderless before being withdrawn by stewards.

Putting the drama behind them, Alligator Blood, starting a $1.80 favourite, and jockey Ryan Maloney scored the easiest of wins by two lengths from Eleven Eleven ($31) with Exhilarates ($13) 1-1/4 lengths away third in the 1400m race.

The relief was etched across the face of trainer David Vandyke, who fought back tears in describing his admiration for Alligator Blood.

“I don’t want to start crying but he’s got that X-factor and then some,” Vandyke said.

The gelding’s name is derived from a poker term, given to players for their resilience and toughness in pressure situations.

Vandyke believes it sums up the son of All Too Hard to a tee.

“He just loves what he does. He gets out there and tries hard. He’s well named because he’s got that alligator blood,” he said.

“He was held up getting to the track. I didn’t know if he was going to get here on time then there were delays at the start and he was agitated but good horses do it.

“It was great to see him step up to this level and win such a prestigious race.”

Vandyke never entertained the thought of scratching Alligator Blood amid the pre-race dramas.

“I wanted to give him the opportunity to get out there and do what he does best and that’s compete,” Vandyke said.

“Considering everything that’s gone on it would have to be the highlight of my career.”

Maloney was equally cool under pressure, settling Alligator Blood midfield before hitting the front and careering away to clock 1 minute 20.98 seconds, only 0.6 seconds outside the track record.