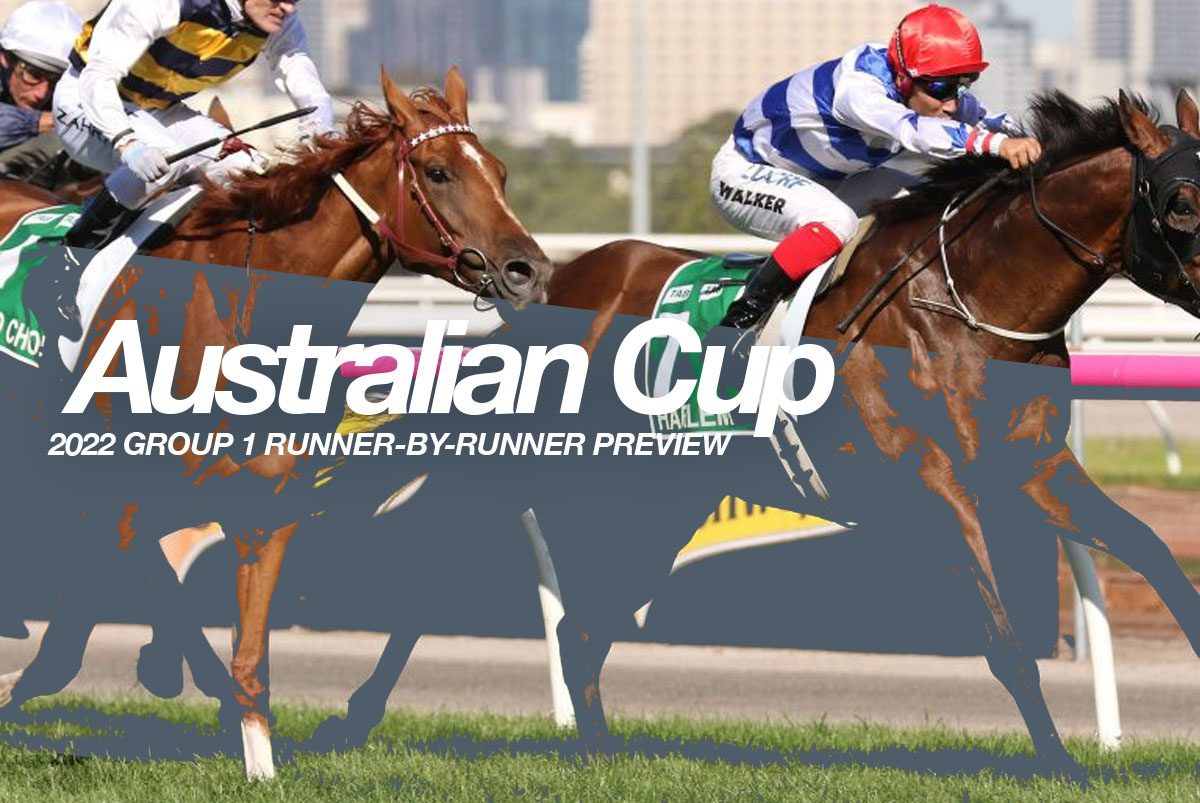 The Group 1 Australian Cup (2000m) is one of the time-honoured events on the Australian racing calendar and the 2022 edition looks to present plenty of value for punters.

Run under weight-for-age conditions on Flemington’s nine-race card this Saturday, the field of 12 has attracted four individual Group 1 winners, with plenty of these looking to claim their first win at the highest level.

Online betting sites have the Kerry Parker-trained Think it Over as a $3 favourite, whilst Melbourne Cup placegetter Spanish Mission is deemed a $4 chance in the race.

Callsign Mav looks to be the obvious leader on paper, whilst Think It Over and Delphi will be close to the speed throughout.

Last start Peter Young Stakes winner Cascadian returns to the Flemington 2000m for the first time since running second to Zaaki in the Mackinnon Stakes during the spring. Having managed to just get there in the Peter Young, the seven-year-old New Approach gelding will need to go to a new level if he is to take out his second Group 1 which he is more than capable of. Having finished third two runs back in the C.F. Orr Stakes, he brings solid enough form that should see him run top four in a race like the Australian Cup. This will be just his second go at the 2000m, but from two draws to gain a suck run in transit just off the speed and with Damien Oliver on board looks to be a genuine first four player.

The ever-consistent Think it Over comes down to Melbourne for the first time in his career, following a fourth-place finish in the Chipping Norton Stakes. Having struggled to quicken on a bottomless Heavy 10 on that day, the Kerry Parker-trained six-year-old is sure to appreciate the firmer going on Saturday at Flemington. He smashed his rivals in the Apollo Stakes prior to his effort in the Chipping Norton and as he steps up in distance as the campaign rolls on he is sure to only get better. With five wins from 10 starts at the 2000m, we know the distance will not be an issue, it is just up to how he goes racing on the other leg. However, he is yet to miss the top three when third-up from a spell (5: 2-2-1) and with Nash Rawiller following him down to Flemington, the stable clearly means business and is going to take a power of beating. He is a derving favourite for the race, with $3 available with Sportsbet at the time of writing.

The Peter Moody-trained Spanish Mission has failed to set the world on fire since a third-place finish in last year’s Melbourne Cup. He comes to the Australian Cup following a third-place finish in the TS Carlyon Cup at Caulfield on February 12, where he looked to have every opportunity in the running. Part-owner Brae Soloski has come out during the week and said if he doesn’t run in the top two, he may just give up racing. However, we think he has gone a run too early with that prediction. With just two wins from five starts when second-up from a spell and no doubt wanting further, he looks to be too short in the market for our liking. A few of his rivals in this much prefer the 2000m, with Spanish Mission looking for 2400m+. In what could be an egg in the face moment, we are expecting him to finish outside of the first four.

The Mitchell Freedman-trained is coming off a second-place finish in the Hobart Cup and will need to improve rapidly to feature in the finish on Saturday. Prior to that, he bolted in the Launceston Cup, but this is much harder than either of those races. Expect a price bigger than the $31 on offer.

Having partnered with Homesman to win the 2021 edition of the race, Anthony & Sam Freedman will be hoping Jye McNeil can steer them to Group 1 glory with Steel Prince. The eight-year-old Nathaniel gelding beat just one runner home in the Peter Young Stakes when chasing home Cascadian. That was his first run in close to 12 months, but we needed to see a bit more to be giving him a chance in this.

The Graham Bedggood-trained Surprise Baby has been to the races on just two occasions since going around as favourite in the 2020 Melbourne Cup. The seven-year-old Shocking gelding finished 2.5 lengths off Spanish Mission in the TS Carlyon Cup when resuming from a spell but was beaten a long way from home. He is screaming out for 2400m and further, so on that basis, he is hard to have in the Australian Cup.

Yonkers from the Chris Waller yard was the best of the beaten bunch in the Peter Young Stakes when finishing a half-length off Cascadian. He improved dramatically from finishing fifth in the TS Carlyon Cup the start prior, but needs to go to another level to be competitive in this. The 2000m is right up his alley but was consistently beaten by big margins in the spring by Think It Over. We’re expecting a midfield finish for Yonkers.

Three-time New Zealand Group 1 winner Callsign Mav comes to the Australian Cup having been scratched from the Peter Young Stakes a fortnight ago, a race he was going to be a genuine winning chance in. Prior to that little mishap, he was narrowly defeated in the TS Carlyon Cup by Earlswood and managed to beat Spanish Mission home who he meets once again on Saturday. He looks to be the race leader and in a race that is not expected to be a high-pressure event, then Jamie Mott should be able to gain some cheap sectionals. We have a few ahead of him in our calculations, but Callsign Mav will prove hard to get past in the home straight.

The Anthony & Sam Freedman-trained Delphi had run his race prior to his first-up effort in the Peter Young Stakes. The Herbert Power Stakes winner from the spring had sweat up massively behind the gates and simply exhausted too much before the barriers had even opened. He was beaten with 200m to go and had the likes of Cascadian and Yonkers go straight pass him. If presents much better this time round he is a top four hope, but off his first-up run he is a horse we find hard to back with confidence.

Maximal came to Australia with plenty of hype around him, but the four-year-old entire has hardly lived up to those levels as of yet. He finished last in the Apollo Stakes when chasing home Think it Over and looks to be up against it in a race like this. Based on his efforts so far on these shores, the $18 on offer from Sportsbet is massive unders and we expect a bigger price being offered on raceday.

The Bjorn baker-trained She’s Ideel produced a career-peak when running Verry Elleegant to within a neck in the Chipping Norton. The six-year-old Dundeel mare is a mare on the rise in the staying ranks and considering she has three wins and a minor placing from five runs at 2000m she must be taken seriously in this. There is no doubt she would prefer the sting out of the ground, but following her run last time out, she is hard to ignore. Jamie Kah hops on board which is a massive bonus and if She’s Ideel can replicate the turn of foot she showed in the Chipping Norton, then she may be one at a double figure price who can get the better of her rivals.

The Edward Cummings-trained Duais was the eye-catcher in the Chipping Norton when gaining next to no luck until it was too late. The four-year-old Shamus Award mare struggled to find clear air until it was too late on that day until the final 100m where the result was all but confirmed. She hit the line with great intent as detailed in the Follow Files following the race and stepping out to the 2000m third-up from a spell looks to be the recipe for success. Joshua Parr sticks on board and from barrier eight will look to have the bay mare settled midfield with cover where she can gain a tow into the event. With two wins from three starts at 2000m and getting back on to a firmer track, Duais is the one to be with in our eyes for the 2022 Australian Cup.