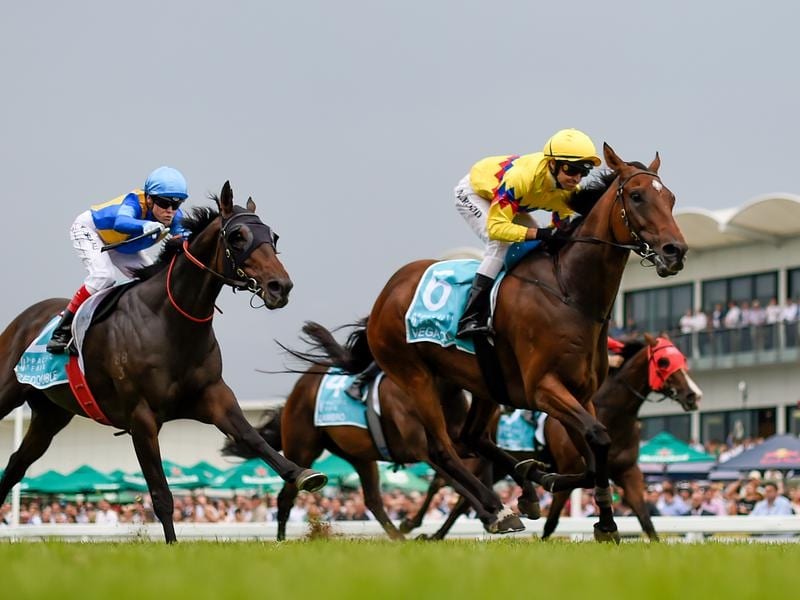 The first Group 1 of the Brisbane Winter Carnival is upon us, and what a way to kick things off with the running of the Doomben 10,000. A quality field of 11 sprinters has been assembled for the $1 million race, headed by Eduardo at $2.30. The race favourite will be the one setting a solid tempo up front, while Splintex and Wild Ruler will be the horses stalking the speed. Other market fancies, including Trekking and Vega One, also should not be too far away in the run. HorseBetting.com.au brings you our Doomben 10,000 runner-by-runner preview, as well as a $100 betting strategy to get you in the winner’s circle.

T: James Cummings | J: Kerrin McEvoy | W: 58.5kg
The Godolphin-trained Trekking has a terrific record in Queensland having won the Stradbroke Handicap in 2019 but he is yet to race at Doomben. The six-year-old son of Street Cry kicked off this campaign in the Group 2 Victory Stakes at Eagle Farm when fifth as an even-money favourite which was disappointing on face value. In saying that, he did look quite big in the yard and after looming to look like the winner in the straight, he tired late suggesting that he needed the run. He has drawn awkwardly in gate 10 and the wet track will be a concern. A win won’t shock, but we’ll save him for another day.

T: Joseph Pride | J: Nash Rawiller | W: 58.5kg
Eduardo’s plans have changed two or three times as to whether or not he would be contesting the Doomben 10,000, but after Chris Waller announced that there would be no Nature Strip, it was an easy decision to make for Joe Pride. The consistent seven-year-old has been racing in career best form this campaign, beating Nature Strip first-up in the Group 2 Challenge Stakes in track record time at Rosehill and then went on to give his rivals a galloping lesson in the Group 1 The Galaxy, leading all of the way to win by 3.5 lengths. After setting a strong tempo in the TJ Smith Stakes, he just cut up a bit in the straight to finish third. If he brings that form he is going to take a power of beating. Drawn barrier six, he will lead and attempt to break his opposition’s hearts. Is the 1200m a query?

T: Chris Waller | T: Luke Dittman | W: 58.5kg
Kings Will Dream was the next ‘big thing’ when he first arrived in Australia, winning six straight races and his way into the Caulfield Cup before going amiss in the Cox Plate. He had nearly 12 months on the sidelines before returning to win the Turnbull Stakes at Group 1 level in 2019 which was his last win. The Chris Waller-trained gelding’s retirement beckons, with his final race set out to be the Stradbroke Handicap in three weeks, so we dare say this is just a fitness run. We can’t have him here.

Wild Planet comes into this first-up which has been successful for the five-year-old gelding in the past, but his trials weren’t as good as we would have liked. The Hawkes-trained gelding won the Group 3 Moonga Stakes two starts back at Caulfield and was then beaten by 4.5 lengths in the Group 1 Cantala Stakes on Derby Day at Flemington. The son of Animal Kingdom will appreciate the sting out of the ground on Saturday and he is effective over 1200m. Expect to see Maloney have him settle in the first half of the field and be strong late.

Splintex was backed off the map in the Group 3 Hall Mark Stakes and he duly saluted for punters, defeating Ranier and Victorem by half a length. The four-year-old son of Snitzel finished fourth to Eduardo when fresh and meets him on level weights, so it is hard to see him turning the tables here. Barrier one is perfect for the Newnham-trained entire because he will be right on the speed and the wet track will not worry him. Fourth-up now sees him here at peak fitness which he will need as this is again harder.

The first Queensland-trained runner in the field is Tony Gollan’s Vega One. The five-year-old son of Lope De Vega was the first horse guaranteed a start in last year’s Stradbroke and after settling at the rear he flashed home into fourth in what Gollan describes as ‘the one that got away’. He has had two runs back this time in and they have both been good. First-up he had to carry the big 60kg and he worked home nicely into sixth out wide on the track, before going to the Weight For Age Victory Stakes where he was only beaten by Niccanova in the shadows of the post. He has never missed a place on rain-affected tracks, and he has two wins and two seconds from six starts at Doomben. He meets the likes of Trekking and Pennino the same at the weights and he is now peaking third-up. ‘Group One Bossy’ will do the steering, and barrier three is ideal to settle three pairs back with cover. $14 at the top online bookmakers appeals.

As a proud North Queenslander, The Harrovian winning a Group 1 would be the icing on the cake. This seven-year-old gelding went on a Winx-like win streak, winning 11 straight races in Townsville, Cairns, Eagle Farm and Doomben, culminating in the Listed Bernborough Plate where he defeated Niccanova. He then went to Melbourne where he finished fifth in both the Group 3 Shaftesbury Avenue Plate and the All-Star Mile in what was a mammoth effort. First-up at 1200m will not be ideal for the son of Fastnet Rock, but he has a will to win, he has won four times at 1200m and is undefeated at Doomben so he cannot be discounted. Brad Stewart knows the horse better than most, and from barrier eight he will be charging home late.

Graff set the world alight early in his career, winning his first three starts and then placing as favourite in both the Run To The Rose and the Group 1 Golden Rose, but it was a long time between drinks with his next win being over two years later. He won the Caulfield Sprint first-up last campaign at Group 2 level in good fashion and has now been relocated to Tony Gollan who has had plenty of success when it comes to turning a horse’s form around; think Krone, Garibaldi and Baller. He has drawn the outside alley, but that will not be an issue as he will get back anyway and be coming home well late. He ticks a few boxes here with the wet track to his liking and his first-up record also reads well. The son of Star Witness trialled brilliantly alongside Garibaldi which his trainer has hyped quite regularly. He’s for the thrill-seekers, but we cannot talk you out of him.

The sole three-year-old in this field is the very talented colt, Wild Ruler. Trained by Peter & Paul Snowden at Randwick, Wild Ruler spoiled the party for Isotope backers last start in the Group 2 Arrowfield Sprint, winning by a nostril. The son of Snitzel was a first-up winner in the Listed Fireball Stakes, before running sixth in The Galaxy behind Eduardo who he meets 4.5kg worse at the weights. James McDonald is arguably the best jockey in the country and he has a beautiful barrier (2) to contend with which will put him in the box seat, stalking the speed. 1200m is this colt’s pet distance which sees him right in this, but the wet track might be a concern given all of wins have been on good tracks. If the track dries up, expect him to firm in the betting and be mighty hard to beat.

The first of the mares is Darryl Hansen’s five-year-old mare, Pennino. The daughter of Easy Rocking has been ultra-consistent all throughout her career, having won the Gold Coast Guineas and Chief de Beers at Group 3 and Listed level respectively. She was first-up into the Group 2 Victory Stakes at Eagle Farm and rocketed home to run third at massive odds of $151 and now will be in a similar situation here. She has drawn wide under Fradd, so she will be sent back towards the rear, but with the speed on and her exceptional wet track record, expect her to again be flashing home late with extra fitness under her belt. Not the worst $41 shot.

Rounding out the field is five-year-old mare Embrace Me. The Edward O’Rourke trained daughter of Shamexpress hasn’t won since her terrific win in the Group 3 Typhoon Tracy Stakes at The Valley in February 2019, but she has placed four times since, including an unluck last-start defeat at this track behind Cardiff over 1110m. She has drawn well in gate five, so expect her to be midfield with cover under Jake Bayliss, but she is rising from an average Benchmark 90 into a Group 1 which makes it hard to see her figuring.

This race has thrown up a number of possibilities and chances and with an unknown weather forecast in Brisbane it makes it hard to get too enthused at this early stage. If the real Eduardo shows up, he could easily win by four lengths, while Wild Ruler has a huge chance if the track gets back to a Good 4 by Saturday. Vega One and Graff are live each-way chances for Tony Gollan who handle all conditions and have that each-way appeal, so that’s the way we are going to go.