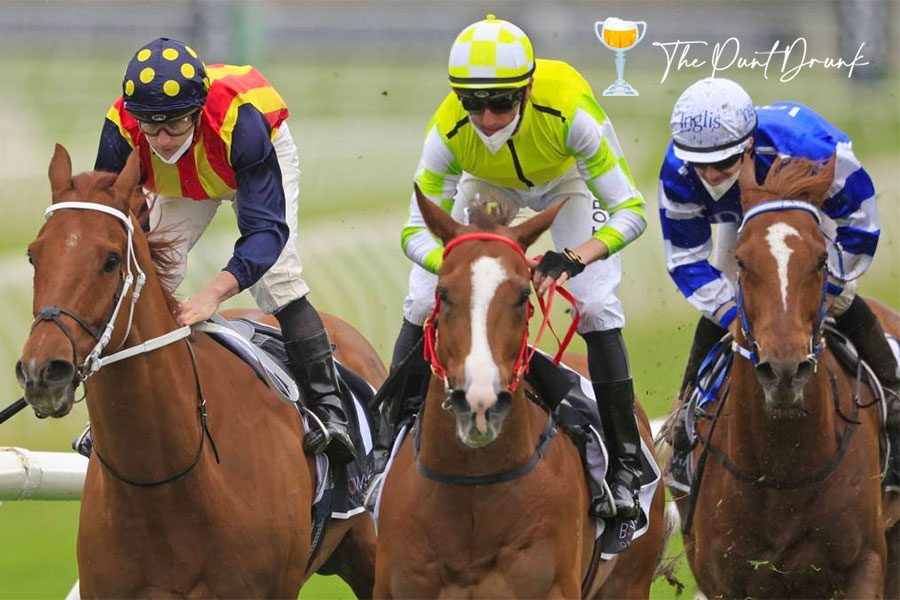 We’re not sure how to open this week’s Punt Drunk column, so we’re going to lead with one simple comment: How bloody good? Sparks will fly at Flemington tomorrow in the Lightning Stakes, a high-quality bunch of three-year-olds will go toe-to-toe at Rosehill, and a couple of deadset camels got the job done for the first time on Tuesday.

As if often the case in 1000m races, there’s plenty of speed in the Black Caviar Lightning Stakes this year. When nine of the land’s fastest horses are racing for $1 million down the Flemington straight, there could be some serious sparks flying. Nature Strip, Masked Crusader and Eduardo are the headliners, having rounded out the trifecta for The Everest in 2021, while Gytrash will be looking to win his second Lightning Stakes. Throw in the three-year-olds – Home Affairs and Profiteer – as well as The Inferno and straight-track specialists The Astrologist and Swats That and we have a serious sprint.

With that much speed, can Nature Strip sustain the tempo to win his second Lightning? Will Eduardo land one on Nature Strip for old times’ sake? Has James McDonald made the right call by jumping aboard Home Affairs? Or will Masked Crusader swoop over the top of them at his first look down the straight? Those questions will all be answered at 4:25pm on Saturday, and we cannot wait. See our Lightning Stakes preview here.

Can Anamoe bounce back? That’s the question on everyone’s lips ahead of the Hobartville Stakes at Rosehill on Saturday. The star colt was a touch disappointing when third in his first-up run, but the Rosehill track bias on that race day was completely against him as it favoured runners on the fence in run. Unfortunately for Anamoe fans, he was nowhere near the fence in the run.

He rises to 1400m on Saturday where he is a Group 1 winner against some similar opponents, but he is arguably in the toughest three-year-old race he has contested; there’s a solid case to be made that this is stronger than his Caulfield Guineas opponents. Anamoe has won twice with James McDonald in the saddle, twice with Damien Oliver aboard, and once when Rachel King partnered him, so can Hugh Bowman be the fourth hoop to salute on big Mo?

IN THE CONGO (by Snitzel) turns the tables on ANAMOE to claim the Golden Rose (G1) at Rosehill. Great riding tactics from Tim Clark. @Chinahorseclub
Stream Aust Racing: https://t.co/QeF4OcU0PD pic.twitter.com/eB114UWNy5

On Tuesday, two horses at two different tracks broke their maidens – in fine style too, we might add. While that might not sound like a big deal, for both Cochrane and Sing A Love Song, it’s a bloody big deal. For their patient owners, we are sure these aren’t the types of races they would have hoped their maligned horses will be winning, but as they say, ‘that’s racing’.

Starting with Cochrane, the John Manzelmann-trained three-year-old went around in his 17th start at Mackay for win number one. The son of Spirit Of Boom is a half-brother to Miami Fleiss, and made his debut at Listed level in Brisbane where he was beaten a lip by Alpine Edge. Since then, he started under $4 on nine occasions and failed to breakthrough in races that you or I could have won.

We then head south to Wyong, where Sing A Love Song finally showed what he has been promising for 12 months. Trained by Gary Moore, this three-year-old ran a couple of flashing-light races as a two-year-old in Sydney, behind the likes of Remarque and Zethus. It took the galloper plenty of starts at short odds, and even a trip to Queensland for the Magic Millions Maiden, but he finally got the job done on Tuesday, romping in by 1.5 lengths. Their loyal followers and owners can breathe a sigh of relief at last.

Checking the noms for September Run, Brooklyn Hustle and Kementari this Saturday