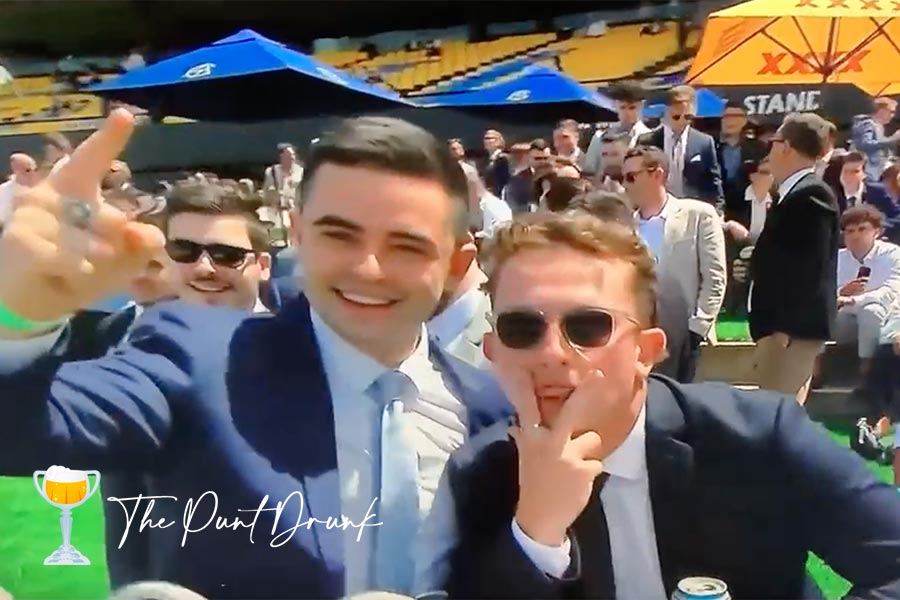 It’s the first day of November, which means only one more sleep until Christmas. Sorry, Melbourne Cup Day – same thing, right? This Monday’s edition of Punt Drunk takes a look back over Derby Day, while we also look forward to tomorrow for Australia’s greatest race.

Last week we were feeling sorry for James McDonald after he quarantined in Melbourne for five days only to lose the ride on Zaaki in the Cox Plate that morning, but he bounced back with a double at Moonee Valley that afternoon and then put on a clinic for the ages at Flemington on Saturday, riding four winners. We mentioned in Friday’s Punt Drunk how Peter V’landys’ plan to hijack the Melbourne Spring Carnival had failed, but maybe J-Mac was PVL undercover, because the Sydney hoop pulled the Melbourne jockeys’ pants down. Kicking off the day with a race-to-race double for fellow Sydneysider Chris Waller, McDonald partnered Fangirl to a classy three-length win in the Carbine Club, before making sure Great House gets a start in the Melbourne Cup with a tough win in the Hotham Stakes in race two. He gave the other jockeys a bit of a chance for the next part of the meeting, before reuniting with Waller in the Group 1 Coolmore Stud Stakes aboard Home Affairs. Talk about a galloping lesson! High in the irons, pointing to the grandstand – we get it, James, you’re good. He rounded out the big day with a win on the well-supported favourite in the last race of the day, with Minhaaj winning the Group 3 Furphy Sprint by 1.25 lengths for John O’Shea. McDonald now has 56 Group 1 wins on his resume and he’s only 29. He could go down as the greatest of all time.

Now, we get that Sydneysiders have been in lockdown for months amid the COVID-19 pandemic, so getting back out and about and on-course for one of racing’s biggest days would no doubt get the body tingling, but come on! One of Sky Thoroughbred Central’s newest hobbies is to show the crowd hanging over the fence on a Saturday at Randwick or Rosehill, and of course, what better way to do it than on live national television? Well, these young blokes certainly got their rocks off to it. Now, we aren’t condoning this behaviour; it’s exciting to be back on-course, and it’s always a laugh to get your head on TV, but come on, Sydney, you’re better than this…

Hope his mums not watching pic.twitter.com/N0YAoXYgh9

We are only one sleep away from the first Tuesday in November, which means one more sleep until the 161st running of the Melbourne Cup, so punters around the country are finalising their trifectas, first-fours and office sweeps. Incentivise is looking to become the first horse since Ethereal in 2001 to complete the Caulfield Cup-Melbourne Cup double, while he will also be the shortest-priced favourite since Phar Lap in 1930. Let that sink in. This year’s Cup doesn’t have some of the class we have seen in previous years, but we could be on the eve of watching Australia’s next champion add a 10th straight win to his CV, so we have to ask the million-dollar question: How far does Incentivise win by? For us, it’s not who wins the Cup, it’s a matter of by how far. Starting off his win streak in a 1600m Maiden at the Sunshine Coast on April 11, Incentivise then went straight to a Class 2 where he only just got the job done, before the big margins started to roll in. He won by 7.3 lengths over 2150m at Toowoomba, nine lengths at Eagle Farm, 9.5 lengths at Ipswich and then a whopping 12 lengths in the Group 3 Tatts Cup at Eagle Farm over 2400m in his final Queensland start for his breeder, trainer and owner, Steve Tregea. He has now won three straight Group 1 races in Melbourne, including a 3.5-length romp in the Caulfield Cup. So let us ask one more time, how far does he win by? (Pssst, you. Yeah, you! He’s $41 with Ladbrokes to win by six or more lengths with Ladbrokes…)

INCENTIVISE….if there was any doubting he was the real deal before today there isn’t now.
He wins the Group 3 Tattersalls Cup by 12 lengths.