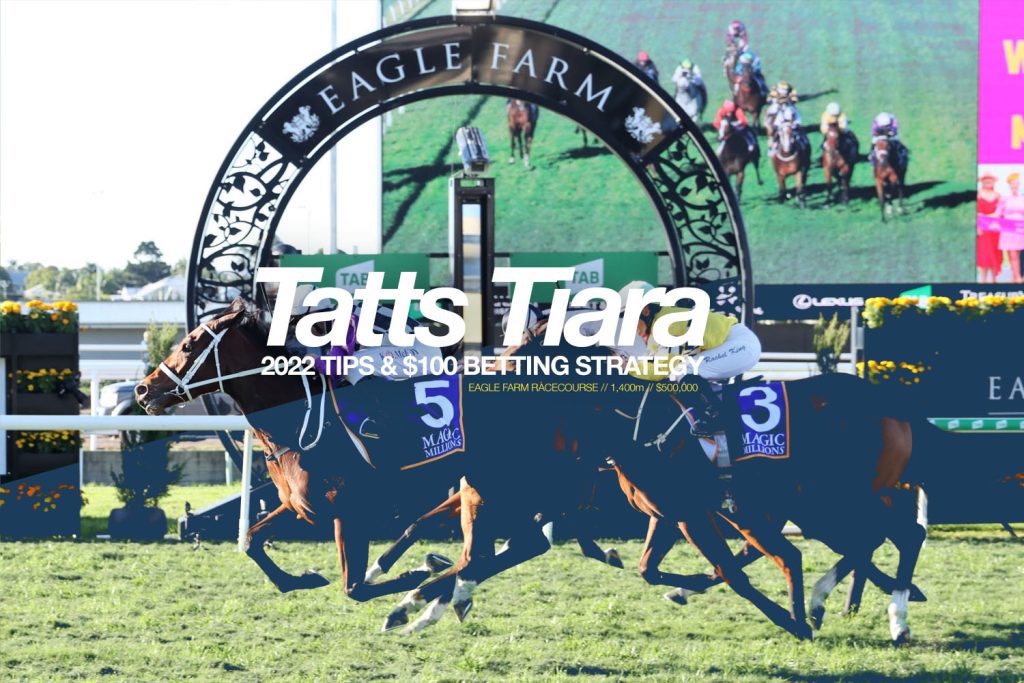 The final Group 1 of the 2021/22 racing season is here, with a capacity field of fillies and mares to battle it out in Saturday’s $700,000 Tattersall’s Tiara at Eagle Farm. The 1400m weight-for-age event has attracted two Group 1 winners of 2022 – Snapdancer and Shout The Bar – while the majority of the rest are arguably deserving of a win at the highest level.

Annavisto is the current $4.50 favourite with Neds following the announcement of the final field and barrier draw, while early favourite Snapdancer was wound out to $6 after coming up with the extreme outside alley. Startantes, Away Game, Shout The Bar and Brooklyn Hustle sit on the next few lines of betting, before it goes out to Wandabaa at $15.

Continue reading for HorseBetting’s top selections and $100 betting strategy for the 2022 Tattersall’s Tiara.

By the time Saturday rolls around, it will have been 12 months and two weeks since BROOKLYN HUSTLE last won a race, but that win was over 1300m at this very track. In her 10 runs since that win, the Jason Warren & Dean Krongold-trained mare has been runner-up twice, while she has also contested six Group 1 races. The flashy chestnut by Starspangledbanner was one of the runs of the race last start in the Stradbroke Handicap against the boys, flying home from near last to run sixth, beaten just over four lengths, with only one filly beating her home – Startantes. For the 0.3-length margin between those two runners, Brooklyn Hustle now gets a weight advantage of 0.5kg, while she also has drawn very well in gate 13 (which becomes barrier nine if all five emergencies are scratched). It would be fitting if Stephanie Thornton and Brooklyn Hustle can bring up their first Group 1 victory together in this race on Saturday, and we do believe that is a live chance of happening.

The Tatts Tiara has always been ‘that sort of race’ where there isn’t really a result that would surprise us. Gai Waterhouse & Adrian Bott celebrated Group 1 success in the Stradbroke a fortnight ago, and they will look to continue that good run of success when they saddle up SHOUT THE BAR and Vangelic on Saturday. The former looks to have been set for this race and this race only, with connections opting to come into the Tiara off a freshen up. The five-year-old mare was dominant winning at Moonee Valley on March 25, leading all of the way over 1600m at Group 2 level on a dry track, before failing to beat a runner home in the All Aged Stakes (1400m) on an unsuitable Heavy 8 track. Her recent Randwick trial was good behind Fashchanel, and she is going to get the favours here. From barrier two, Ryan Maloney will look to dictate terms on this front-running, dry-track specialist, and the win could just fall into his lap. You just cannot doubt this stable when it comes to Group 1 races.

If AWAY GAME went to the Stradbroke on June 11, we believe she would have run a very good race. Although yet to win a Group 1, the Ciaron Maher & David Eustace-trained daughter of Snitzel has won over $3.7 million in prizemoney and has been runner-up three times at Group 1 level. Her last-start 10th in the Kingsford-Smith Cup (1300m) at Eagle Farm was much better than it looks on paper, as John Allen couldn’t find any clear galloping room in the straight, so she went to the line practically under a tight hold, but was still matching motors with Isotope and Private Eye, who ran fourth and second respectively in the Stradbroke. While Away Game is yet to taste Group 1 success, her jockey William Pike is certainly no stranger to the winner’s room, having added two more Group 1 wins to his resume during this year’s Brisbane Winter Carnival. Barrier 17 does look sticky, but Pike might look to have her a bit closer than we have seen recently, which certainly gives her a chance in what could be her final race start.