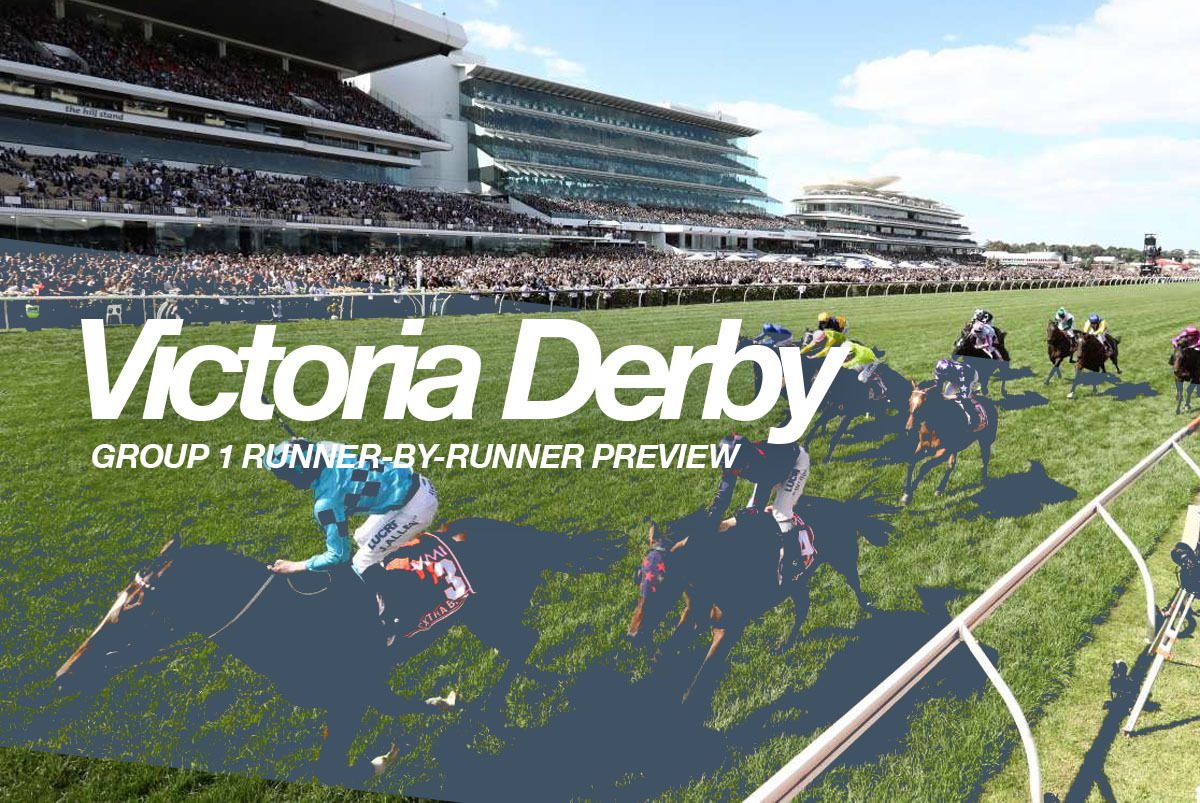 The Group 1 Victoria Derby is set to be run at Flemington on Saturday afternoon to help kickstart the Melbourne Cup Carnival. HorseBetting’s Victorian form analyst presents his runner-by-runner preview, top selections and betting strategy for the $2 million race.

Forgot You comes to the Victoria Derby in arguably the best form of any runner in the race. He took out the Moonee Valley Vase in impressive fashion last weekend when reeling in stablemate Commander Harry, who gave him something to chase over the final 600m. He has won three of his last four starts, with his only “failure” coming in the Caulfield Guineas when beaten just on three lengths by Anamoe two starts back on October 9. With that form franked in the Cox Plate, this colt looks the clear and obvious bet in the Derby. As he does in all his races, he will most likely hit a flat spot 600m out from home, but with Daniel Moor on board, we need not panic. Look for him to pick up over the final 400m and prove too hard to hold out.

Tutukaka was thoroughly impressive when winning the Listed Geelong Classic on October 20 over 2200m and has always showed plenty of staying ability. Outside of Character in second place that day, it is hard to see just how deep that form will be and how it will stand up here. However, his 0.75-length win was very easy on the eye, and it looked like he still had plenty left in the tank when hitting the line. The 2500m should suit him perfectly, and the booking of James McDonald will give him an extra length on some of his rivals. With the big field, it will be all about where the gelding gets in the running, but if he is within striking distance at the home turn, a win certainly would not surprise.

Alegron ran third in the Spring Champion Stakes last time out, and having chased home the likes of Profondo, Head Of State and Never Been Kissed this campaign, he brings one of the stronger form lines to the Derby. The booking of Brett Prebble is a massive bonus for the Godolphin runner, who will most likely drop back into the second half of the field and run on. He produced the best final 800m split in the Spring Champion Stakes despite being beaten by 2.75 lengths, and he looks like he will eat up every bit of the 2500m. Whether he can match the likes of Forgot You, Gunstock and even Tutukaka remains to be seen, however.

Since taking out his maiden at Cranbourne on September 12, the VRC Derby has been on the agenda for the Mick Price & Michael Kent Jr-trained Gunstock. His chances were dealt a cruel blow on Tuesday when drawing barrier 19, but there is no doubt that he deserves to be towards the pointy end of the market. He took out the Group 2 Caulfield Classic on October 16 in dominant fashion, settling midfield before hitting the front inside the final 150m and charging clear to stamp his Derby claims. The step up to 2500m looks ideal, and with the in-form Price & Kent and Jye McNeil combination, we expect to see Gunstock finish in the top three; it is just whether he can compete with the proven quality of Forgot You.

Akihiro is going to need to make up at least two lengths on Forgot You from his defeat in the Moonee Valley Vase last weekend and looks like he may struggle to see out the 2500m. He had every chance to finish closer last time out when settling close to the speed but simply plugged away over the final 200m. It will take sharp form reversal to be competitive this weekend, and for that reason he is hard to have.

Despite being a $26 chance in some markets, a win by Character certainly would not surprise us. He was left in front a long way from home in the Geelong Classic and was seemingly floating towards the line when Tutukaka finished over the top of him late. Barrier 17 should not cause too many issues, as he will look to settle in the first half a dozen, and if Fred Kersley is afforded a touch of luck in gaining cover, he could be the one to salute at a price.

The second of the Price & Kent runners is Jungle Magnate, who is another runner coming through the Moonee Valley Vase. He managed to finish third behind Forgot You and Commander Harry but will need to overturn a 1.7-length deficit on those two. He had Forgot You’s back at the 200m mark, but his rival left him behind over the final furlong. On that form alone, it is hard to see how he troubles the more-fancied runners here.

The stablemate to race favourite Forgot You gave punters a massive heart attack in the Moonee Valley Vase having gone for home at the 600m mark. Despite being a $101 chance on that day, Linda Meech rode him as if he was the best horse in the race and it almost paid off. He found one better in the end, but if Meech produces something similar here, then the $18 quote might be one worth taking on. He is certainly a trifecta hope, but a win would not completely shock us.

Hitotsu managed to beat Forgot You home in the Caulfield Guineas at his last start, where he was a tough watch having copped significant interference when starting his run. He managed to beat Commander Harry in impressive style at Donald prior, which ties in the Forgot You form nicely. If he can see out the 2500m, he should be fighting out the finish.

Cerebus from the Anthony & Sam Freedman team brings a different form line to a majority of his rivals, having taken out the Listed Hill Smith Stakes at Morphettville on October 9. He managed to beat home Jungle Magnate, who he meets here on Saturday, but considering he is drawn in the car park, he will need a heap of luck to find a spot with cover. The booking of Damien Thornton is certainly a bonus, but we think Cerberus might find it a bit tough late on in the 2500m.

Gundec needs to make eight lengths up on Gunstock from when they met in the Caulfield Classic. Despite a nice win at Flemington two runs back, he is one that will finish in the second half of the field, in our opinion.

The Gary Portelli-trained Clyde is coming off a win in a BM58 at Scone on October 22, and it is hard to see how he measures up against some of his rivals here. He was a $101 chance in the Spring Champion Stakes two starts back and was beaten eight lengths, so the $201 is a fair quote.

El Rocko is yet another to come through the Moonee Valley Vase, where he was beaten 3.15 lengths by Forgot You. He is still a maiden as he prepares for his ninth start, and unlike Johnny Get Angry last year, we do not think he will be breaking his duck in the Derby.

Raging Bull will need to improve markedly from his 5.9-length defeat in the Spring Champion Stakes, although he did have a few excuses in the running given he was trapped wide. He was a $41 chance that day and is a similar quote on Saturday, having only just stepped out of maiden grade. If you like his chances for one reason or another, you will get better than $50s on Saturday.

Having been narrowly defeated in his first two starts in Melbourne, the Lindsey Smith-trained Cheerful Moment from WA was simply awful in the Moonee Valley Vase, beaten 10.6 lengths. It is hard to see how he turns the form on the likes of Forgot You, Commander Harry, et al.

Teewaters backed up his dominant six-length maiden win at Ballarat on September 19 when finishing third to Gunstock in the Caulfield Classic, beaten 2.75 lengths. He has plenty of upside, but the Derby may have come up a bit too soon in his career. Keep an eye on him for a run in the autumn.

Despite winning two of his three career starts, it is hard to see how Zoumon measures up here in the VRC Derby. If he does gain a start, there is little doubt that he would be the natural leader, but with plenty of these looking to get back and run on, he would be found wanting late on in the piece.

If Sebastian The Fox is to gain a start for Shay Keating, the son of Foxwedge will need to overturn a 6.5-length defeat to Gunstock in the Caulfield Classic. He was also beaten 6.55 lengths by Forgot You at Moonee Valley a few starts back, so the $101 quote looks a fair price on form.

If King Of Pharaohs is lucky enough to gain a start for the Lindsey Smith stable, it is hard to see how he makes much of an impression. He was beaten convincingly in the Geelong Classic and looks outclassed here.

The emergency with the best chance in the VRC Derby is clearly Mitch Freedman’s Spirit Of Gaylard. He will need a miracle to gain a start on Saturday, but his run in the Moonee Valley Vase suggests he could measure up if he is lucky enough to gain a run. He was badly held up at a crucial time and got into a bumping duel approaching the home turn, but when he balanced up he let down nicely and deserved to finish closer than the 2.65-length margin suggests. If he doesn’t gain a run on Saturday, wherever he goes next, make sure you back him, because he is a colt with plenty of ability.

We are happy to be with Forgot You, who is arguably the one with most upside in the Victoria Derby. He has won three of his past four races, and although he was defeated by Anamoe in the Caulfield Guineas, the 1600m against that type of quality was always going to be too sharp. The 2500m suits perfectly and he is a clearly standout ahead of three or four who will be battling away for the minor money.