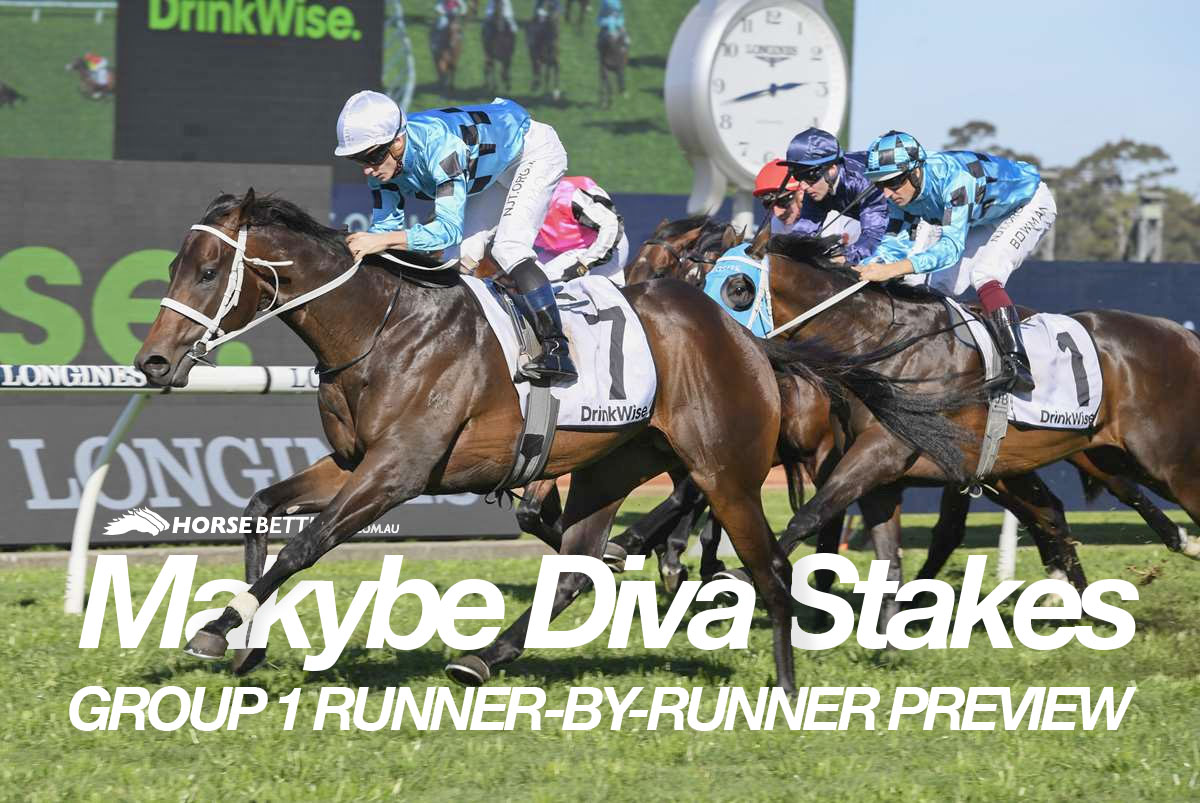 The Makybe Diva Stakes is the first of the Group 1 races at Flemington for the 2021/22 season, and HorseBetting’s Victorian form analyst presents his runner-by-runner preview, top selections and betting strategy. Tatts Tiara winner Tofane is a $4.50 favourite for the $1,000,000 weight-for-age feature, whilst Melbourne Cup market leader Incentivise is on the second line of betting at $5.50

The 2020 Cox Plate champion is one of 10 Group 1 winners in the Makybe Diva Stakes and comes in first-up from a 16-week spell. Having claimed the Group 1 Tancred Stakes, Sir Dragonet’s autumn campaign looks a lot worse on paper than what it actually was; he was racing in proper company alongside the likes of Zaaki, Verry Elleegant and Addeybb and, outside of the Doomben Cup debacle, wasn’t beaten too far throughout. Unfortunately, he would much prefer this to be run on a Soft 7 or worse, so we are going to steer clear on a day where perfect conditions are expected.

The Tom Dabernig-trained Fifty Stars is as honest as the day is long and was only 2.25 lengths off Zaaki when second in the Group 2 Hollindale Stakes during the winter. However, his first-up run in the Memsie Stakes at Caulfield on August 28 suggests he will need to go to a new level to feature here. He does love the 1600m at Flemington, having won twice from six goes with two runner-up efforts to his name. However, with the quality involved in this, it is no surprise to see him quoted at $26.

One of the lesser-known runners in the 2021 Makybe Diva Stakes field is the former Japanese galloper Keiai Nautique. Having flashed home to finish third behind Mounga and Verry Elleegant in the Winx Stakes in his Australian debut, we anticipate he will only travel better as he steps up to 1600m. Trainer Matthew Smith knows how to take out the Makybe Diva, having won this race last year with Fierce Impact. Keiai Nautique produced the fastest last 200m of the day at Randwick, and if he can run on just as strongly at Flemington, he could be the one at a double-figure price that causes a boilover.

Imaging is one of the outsiders of the field for good reason, having not been in the winner’s stall for close to 18 months. However, he was held up for a run at in the home straight at Randwick in the Winx Stakes and never really saw daylight until it was all over and done with. He’s in the right yard to cause a boilover, with master trainer Chris Waller capable of pulling a rabbit out of a hat, but it will take something special from a horse that is finding wins harder and harder to come by.

Having already claimed a golden ticket to the Caulfield Cup after winning the Mornington Cup earlier in the year, Mount Popa will be far from screwed down for the Makybe Diva Stakes. He was another who didn’t see much daylight in the Winx Stakes and is one who will certainly appreciate the firmer ground on Saturday having run in the top three 10 times from 11 starts on Good tracks. The $41 on offer for one of the major players in the Caulfield Cup markets says it all. This horse has bigger fish to fry this campaign, and he is one we are willing to watch go around.

Melbourne Cup favourite Incentivise is to kick off his spring campaign over 1600m, and despite his grand final being the first Tuesday in November, it is hard to knock his form in Queensland during the winter months. It is unclear what he actually beat class-wise, but when horses win by seven, nine, 9.5 and 12 lengths, the racing world certainly takes notice. The Shamus Award gelding has won at 1600m in the past but will certainly get better over further. He gets the in-form Brett Prebble on board for the first time, and if he levels up to some of these proven milers at Group 1 level, he may just further his claim as one of the best horses in the country. However, the $5 odds are a touch too short for a horse that has much bigger targets on the agenda this campaign.

He won the Tasmanian Derby, ATC Derby and South Australian Derby last campaign, and Explosive Jack will be looking to add another Group 1 to his resume when he steps out on Saturday. He is a runner who is screaming out for 2000m or more, so it is easy to see why he is $34 in Makybe Diva Stakes betting markets.

We love the Denis Pagan and Johnny Get Angry story, but he is another who will find the 1600m too sharp for his liking. The $151 is a harsh quote from online bookmakers, but he shouldn’t be featuring here.

Outside of Behemoth and Beau Rossa, one of the better performers in the Memsie Stakes was Aegon. Having hit the line nicely on that day, the Kiwi runner will no doubt appreciate the step up to 1600m. He would much prefer this to be run on softer ground, but his run in the Memsie suggested he may not be a one-trick pony after all. From barrier four, he should get a beautiful run in transit under Luke Currie and be there to strike when the opportunity arises. If he brings his best, Aegon is certainly a big trifecta and first-four hope.

Mo’unga was simply too good for his rivals late on in the Winx Stakes, beating home Verry Elleegant and holding off the smart She’s Ideel and Keiai Nautique, both of whom he meets again here. The four-year-old gelding has had two starts in Melbourne already, running third in the CS Hayes Stakes, so we know he can build through the gears down the Flemington straight. If he brings his best on Saturday, Mo’unga should be too hard to hold out as he claims his second Group 1 win in as many starts.

Colette is notably a wet tracker but was another one who showed signs of improvement on firmer ground in the Memsie Stakes. The Godolphin runner has consistently been racing against Verry Elleegant and has been far from disgraced when chasing home the star mare. We expect to see the five-year-old settle in the second half fo the field under Damien Oliver, and if she can handle the firmer ground at Flemington, she looks a nice each-way play.

Tofane claimed two Group 1 events during the Queensland Winter Carnival, taking out the Stradbroke Handicap and Tatts Tiara. She was outsprinted in the Memsie Stakes first-up but managed to hit the line nicely. With two wins from five second-up runs, we know she will be rock-hard fit and raring to go on Saturday. With Craig Williams on board, the six-year-old mare will be there or thereabouts in the finish. She may struggle to see out the 1600m in her first crack at the distance, but in a race that is far from a taxing mile, class alone may take her close to winning this.

On paper, Inspirational Girl’s record stacks up against most of these. The 2020 Railway Stakes winner has three wins from three starts when second-up and has the exact same record in races at 1600m. She is another runner who will be looking to get back in the field, and that could be an issue in a race that lacks speed. Her class alone could see her finish in the top five, however, especially if Damian Lane can find a way to get her into a spot in the first half a dozen upon settling.

Mo’unga is our clear top selection in the Group 1 Makybe Diva Stakes. Despite the race looking bereft of pace, he is one of the few runners who is a genuine miler. With the likes of Inspirational Girl, Aegon and Colette leading the chasing brigade, it is set to be a cracking edition of the Makybe Diva Stakes with 15 Group 1 wins combined across the field.