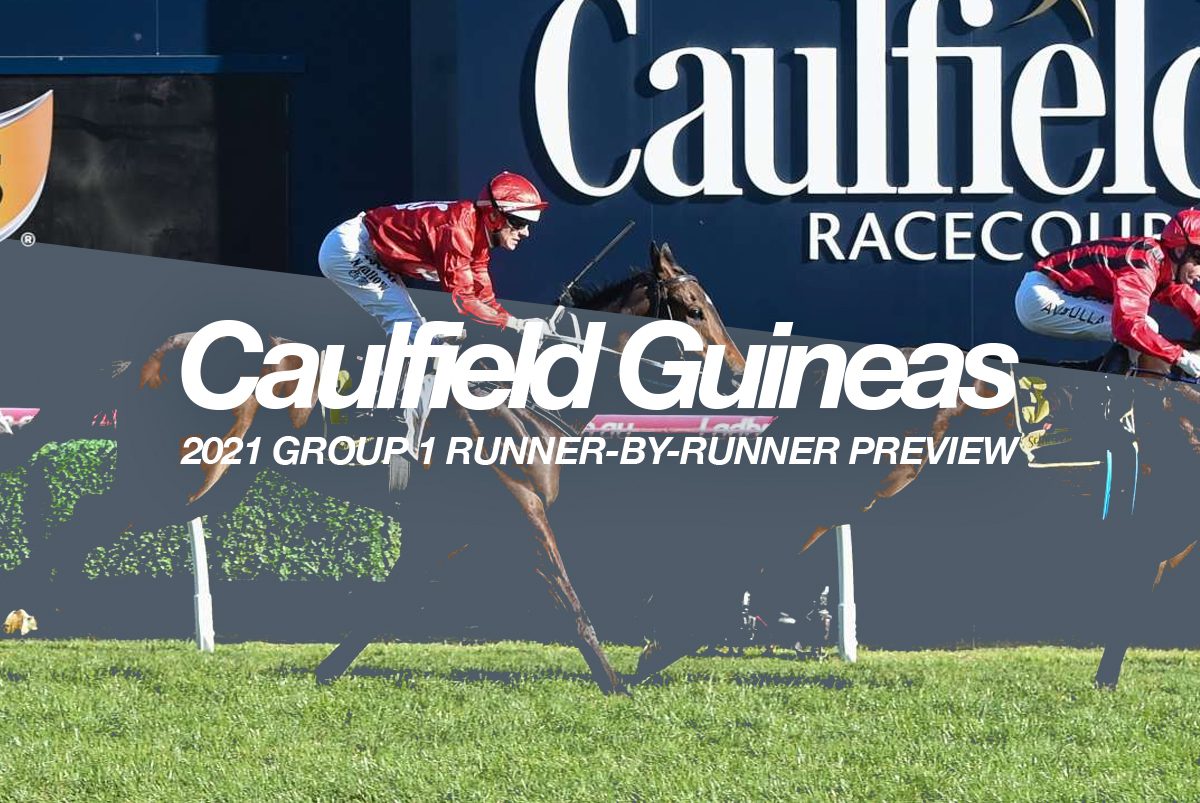 The Caulfield Guineas is one of three Group 1 races at Caulfield on Saturday afternoon, and HorseBetting’s Victorian form analyst presents his runner-by-runner preview, top selections and betting strategy for the $2,000,000 feature. Golden Rose Stakes runner-up Anamoe is a $2.20 favourite, with Blue Diamond Stakes winner Artorious an $8 second-elect for the 1600m race at set weights.

There is little doubt that Anamoe is up there as one of the best three-year-olds this season. Despite failing to get the job done in the Golden Rose Stakes, we expect the Godolphin colt to bounce back with a strong win in the Caulfield Guineas. He has run in the top three in the Blue Diamond, Golden Slipper and Golden Rose, and James Cummings and Damien Oliver will be looking to add another Group 1 win to Anamoe’s record following a strong victory in the ATC Sires’ Produce Stakes back in April. He will need a touch of luck early on from barrier 15, but he has the right jockey on board in Ollie. As long as he does not get trapped three wide in the running, he should be finishing over the top of his rivals and proving too classy for this field.

Having been beaten by two lengths in the Golden Rose when storming home down the centre of the track, the Blue Diamond Stakes winner Artorius looks to be the biggest danger to Anamoe’s chances in the Caulfield Guineas. On a day where it was tough to make up ground from the rear of the field, he produced the best last 800m of the meeting to suggest if he had drawn a better barrier, he had every right to finish closer. He has drawn barrier two on Saturday, and despite his racing pattern suggesting he wants to get back and run on, Damian Lane may opt to settle him one or two pairs closer to the speed than usual. Artorius arguably is the only horse in the race who can match Anamoe’s turn of foot, and if he brings his best, he could be the one to blouse the favourite.

Another one coming through the Golden Rose is the Richard & Michael Freedman-trained Tiger Of Malay, who needs to overturn a two-length defeat to Anamoe. Having been given every favour in the run by Nash Rawiller, the Extreme Choice colt could do no better than a fifth-place result, and we expect he will find it hard to turn the tables on the top two. The booking of Craig Williams is a boost, and from barrier one it is just a matter of whether he sees clear running in time with the backmarkers no doubt staking their claim whilst Willow is trying to get out of a pocket. In a big field, with that much luck required, it is hard to bet on Tiger Of Malay with confidence.

If you were on Alpine Edge in the Caulfield Guineas Prelude on September 18, you do not need the reminder that he simply saw no clear daylight in the home straight and without a doubt deserved to finish closer than what his 1.45-length defeat suggests. Having drawn barrier one on that day, Craig Williams simply could not get him out of pocket until the final 100m when it was all over bar the shouting. Damien Thornton hops on board the Better Than Ready colt, and from barrier five we expect to see him settle midfield in the moving line. However, with inconclusive form against elite three-year-olds, it is hard to make much of a confident case about the Queenslander’s chances.

The Peter & Paul Snowden-trained Captivant is another runner to come through the Golden Rose, where he was beaten just over three lengths to finish midfield. The Champagne Stakes winner from the autumn is yet to go on with the job during his three runs this spring, although he has been chasing home the likes of Anamoe and In The Congo up in Sydney. This is set to be Captivant’s first time going the ‘Melbourne way’, and considering he is drawn in barrier 14 and needs to make up three lengths on Anamoe, it is hard to see how he features in the finish.

One of the better longshots comes from the Peter Moody stable, with Caulfield Guineas Prelude winner Lightsaber presenting great value. With most of the favoured runners expected to be making their move from the rear of the field, this front-runner could be tricky to run down. He was beaten a length two starts back when chasing home the likes of Bruckner and Artorius, before winning the Prelude in smart fashion when settling outside the leader and offering a kick in the home straight. He looks to be the sole leader in the race, so if he can see out the 1600m, there is every chance Lightsaber could spring an upset at odds.

Despite winning the Listed Dulcify Stakes two starts back at Kembla Grange on September 11, the Chris Waller-trained Giannis may find this a touch too hard. He struggled noticeably when beaten five lengths in the Golden Rose, and despite having the red-hot Brett Prebble on board, it is hard to make much of a case for this one in the Guineas.

While most of the horses in this field have been racing consistently at the top level, last-start Group 3 Stutt Stakes winner Forgot You is a runner making his way through the grades. Having won his last two events around Moonee Valley in impressive fashion, the son of Savabeel is sure to appreciate getting to a track like Caulfield on Saturday. In those two wins he has taken some riding from Daniel Moor, as the colt tends to hit a flat spot 400m out and looks to be in trouble before unleashing an impressive turn of foot. It might be that he cannot give runners like Anamoe and Artorious the chance to make up ground when he hits the flat spot, but if he avoids that issue, he could be a chance to fight out the finish. This is one to include in exotics.

The Chris Waller-trained Coastwatch was the best of the rest behind Anamoe and In The Congo in the Golden Rose, beaten 1.6 lengths to finish third. He slowly plugged away at the margin In The Congo had set up entering the home straight when settling fourth on the fence, but the rail was the place to be on that day. We expect he will struggle on Saturday, even more so now that he is jumping from barrier 12. Luke Currie will need plenty of luck early on – if he doesn’t get trapped wide, he is a wider exotics player – but other than that, he is one we are happy to watch go around.

Mr Mozart is another who comes through the Stutt Stakes at The Valley, and considering he went down by a pimple to Forgot You, he has to be in some sort of contention on Saturday. Whether the Hawkes-trained colt can actually figure in the finish is another thing in itself, but he hardly knows how to run a poor race. He won the Listed Exford Plate at Flemington two runs back when beating Artorius by a head, and if he can handle the step up to 1600m, he could be a chance to upset the apple cart.

The Robbie Griffiths & Mathew de Kock-trained Daily Bugle has chased home Mr Mozart at his last two starts, and he has struggled to make much of an impact on his rivals in that time. He was only beaten 0.5 lengths in the Stutt Stakes, but it remains unclear whether a third-place finish there will stack up in a race like the Caulfield Guineas. It is hard to make much of a case for him here.

Knightstown has been beaten a combined eight lengths in his past two runs and looks to be severely outclassed in this field. The $101 looks to be the right quote for him.

Dark Rebel has been beaten a combined 16 lengths in his three runs this campaign, including a nine-length margin at his last start in the Gloaming Stakes. He has not won since his debut, and the $101 looks to be unders.

Zerelle in a BM64 at Flemington on September 22 when finishing fourth and was completely outclassed in the McNeil Stakes behind Brucker and Artorius the start prior. The $101 on offer looks to be too kind; he is severely outclassed here.

Riverplate is one of just two maidens competing in the Caulfield Guineas. He was held up for a run in the Stutt Stakes, although his form prior suggests he will struggle big-time here. A finish in the top 10 will be considered a win.

Of the two maidens, there is little doubt that Prix De Turn has the most upside based on his debut run at Sandown on September 25. He flashed home down the centre of the track when beaten 1.25 lengths to finish second, but this looks to be a step too far at this stage in his career. Nevertheless, he is one worth following post-Guineas.

Last-start Donald maiden winner Hitotsu is the only emergency in the Caulfield Guineas and looks unlikely to gain a start. He showed a nice turn of foot at his first-up run, but considering he could not get within three lengths against most of his rivals here in his juvenile season, it is hard to see how he makes much of an impact if he makes the final field.

Online bookmakers have the 2021 Caulfield Guineas as battled between Anamoe and Artorius with little separating the two in the market. Anamoe has always shown plenty of ability and is clearly the class runner in the field, and we expect he will be too hard to hold out on Saturday. His run in the Golden Rose was remarkable considering nothing made ground from the back of the field that day, and if he can bring his best to Caulfield, he may just blow his rivals away. The one at a double-figure price we are happy to be with is Lightsaber, who may run a cheeky race out in front and will give Anamoe and Artorius something to run down.