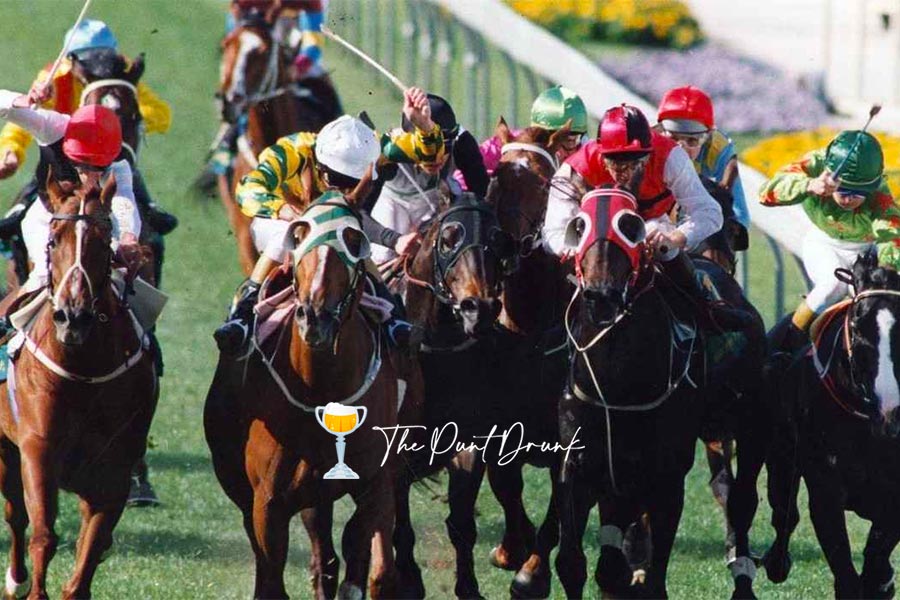 With Day 2 of The Championships hopefully set to be run and won on Saturday – we say ‘hopefully’ because by all reports it is pissing down in Sydney, again – racing fans are on the edge of their seats as we prepare for possibly the greatest race in the history of Australian horse racing. On today’s edition of Punt Drunk, we try to build the hype by looking back on some of the classic races throughout our rich history.

The Cox Plate of 1992 had it all. A field of champions lined up for the 2040m Moonee Valley feature, including the likes of eventual winner Super Impose, runner-up Let’s Elope, Better Loosen Up, Mannerism, Naturalism, Palace Reign, Sydeston and Rough Habit. Like a lot of these memorable races, there was plenty of drama as both Sydeston and Naturalism fell as the field packed up headed for home. With two of the fancied runners out of the race, patrons certainly weren’t left disappointed as Super Impose and Let’s Elope battled out the concluding stages in an all-time classic race.

It’s not often that we look to three-year-old races when it comes to finding superstar fields, but the 1996 Australian Derby had exactly that. It’s easy to look back some 26 years later and say “what a race”, but that was the same feeling in the build up to the Group 1. Octagonal, Saintly, Filante and Nothin’ Leica Dane filled – four champions of the turf – filled out the first four, and they battled it out the entire way up the home straight. Punters hoped it would be a thrilling race, and it worked out to be exactly that.

The 2022 Queen Elizabeth Stakes will be one we talk about for years to come, regardless of the result. In the nine-horse field, there are seven individual Group 1 winners, with 26 wins at the highest level shared between them, while Zaaki and I’m Thunderstruck have an All-Star Mile and a Golden Eagle respectively to their names. The race shapes to be a battle for the ages, while it will hold a special place in many people’s hearts should this be Verry Elleegant’s final Australian start. With $4 million up for grabs, it is guaranteed to go down in the history books.

Ahead of what might be Verry Elleegant's final race in Australia, @mcacajamez talks about his decision to stick with her in the Queen Elizabeth Stakes, the hard work done by @cwallerracing's team & the incredible ride she's taken him on.@emma_freedman @racing_nsw @aus_turf_club pic.twitter.com/baosZM3Xp7