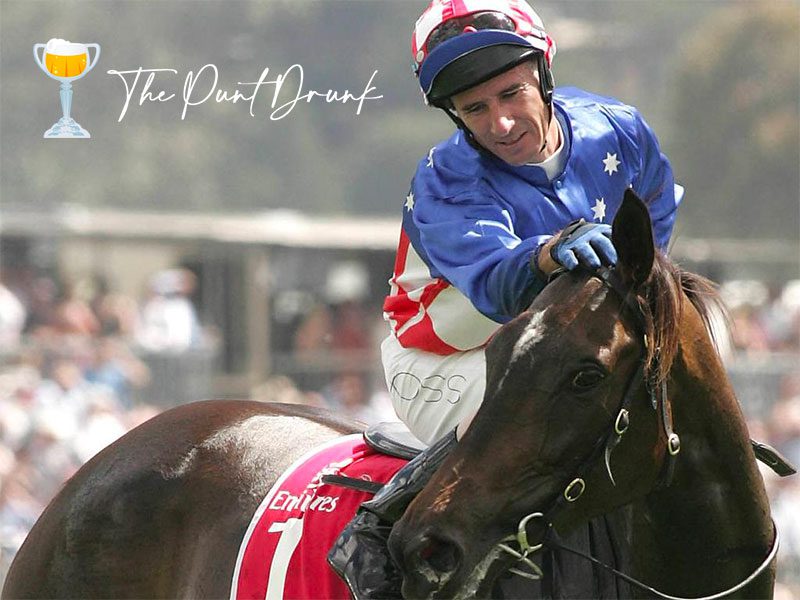 We’re not crying, you are. It’s the end of an era in the racing world with the legendary hoop Glen Boss announcing his retirement from riding during the week, so we’re going to need a drink to get over it. Meanwhile, it’s absolutely pissing down with rain in the lead-up to Saturday and the closer we get to the day, the wetter it’s going to get. Punt Drunk isn’t just about the laughable mishaps, quirky news or taking the piss; we also have a bit of a soft side, and on Wednesday we saw a bit of magic happen at Gosford. It’s Feel Good Friday, let’s get our teeth into it!

BOSSY RETIRES AS ONE OF THE GREATS

Three Melbourne Cups; four Cox Plates; two Golden Slippers. Those nine races alone make for a hell of a CV, but that’s just the tip of the iceberg for Glen Boss. Throw those nine in with another 81 Group 1 wins – 15 of which were at the Randwick mile – and you can see why the hoop is a legend of our game. The 52-year-old will have his final ride on Saturday aboard Spanish Mission in the Zipping Classic at Caulfield, where he will be looking to bow out as a winner on the $1.55 favourite. Boss partnered Makybe Diva to all three of her Melbourne Cup wins, as well as partnering So You Think to his first Cox Plate and claiming the 100th running of the Moonee Valley feature aboard Sir Dragonet. The pressure is well and truly on the great man this Saturday, though – he hasn’t ridden a winner since August, which is a massive drought for someone of his standards. No pressure, Bossy!

This Saturday at Caulfield will mark his final day in the saddle.

If we told you Caulfield will be the only track on the east coast of Australia that will be running on a Good 4 on Saturday, you wouldn’t believe us. Thankfully, Group 1 racing in Perth looks safe from the rain, as too Morphettville, but a little further north at Rosehill and the Gold Coast, horses will need flippers and a snorkel if the racing is to go ahead. The Gold Coast has been a Heavy 10 for a couple of days now and a further 35mm is expected on Friday, putting the Recognition Stakes meeting in serious doubt, while Rosehill is also a Heavy 10 with more rain expected for the Festival Stakes meeting. It could be a chance to see what the missus and kids get up to on a Saturday afternoon, but luckily for you, we have you sorted with tips for Caulfield, Morphettville and Ascot if Rosehill and the Gold Coast get washed out.

Canterbury and Rosehill will be under water soon, hopefully the rain hits then finishes up. #bottomless 🙏🏼 pic.twitter.com/FALDDqzFmG

A few months ago, racing lost the wonderful Nini Vascotto to cancer. Vascotto had worked in many different facets of the racing industry, but her love for the animal was second to none. Nini and her husband, Murray, part-owned three-year-old filly Forzanini, who was named in Vascotto’s honour, and on Wednesday at her first race back, the Pride Of Dubai filly got the chocolates at Gosford by the smallest of margins. Whether or not that was thanks to some hard riding by Tommy Berry or some extra help from above, it was a special win for all involved. Racing knows how to bring these incredible stories out sometimes – it’s why we love it.

Better make some room on the door! Bloody hell! Thanks for everyone’s well wishes, it’s a beautiful reminder of how special Nini is to so many people.
Thanks to @SnowdenRacing1 @TommyBerry21 & @torryburnstud
What a day! pic.twitter.com/HRMWMl58cD