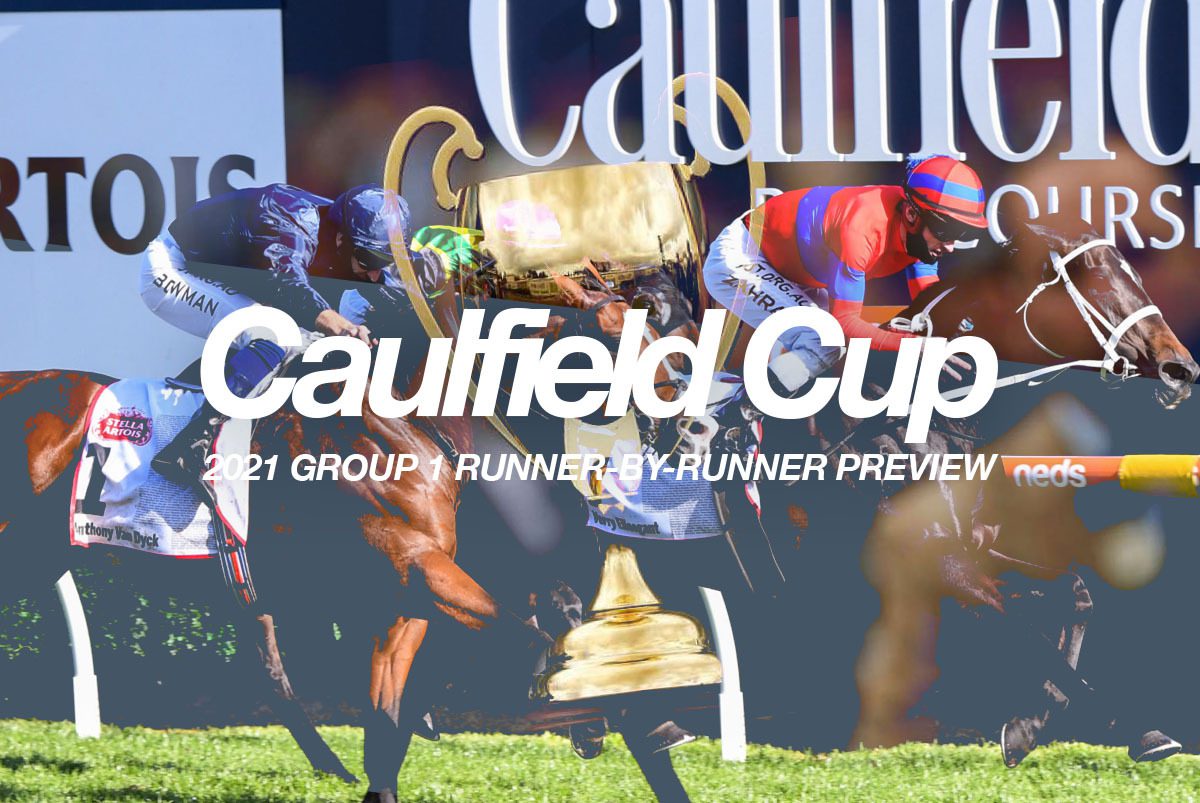 The Group 1 Caulfield Cup is one of the biggest races in the Melbourne Spring Carnival, and HorseBetting’s Victorian form analyst presents his runner-by-runner preview, top selections and betting strategy for this Saturday’s $5,000,000 feature. Turnbull Stakes winner Incentivise is a $2.35 favourite, with Herbert Power Stakes winner Delphi a $7 second-elect for the 2400m handicap.

Despite being beaten close to two lengths in the Caulfield Stakes by Probabeel, the Anthony & Sam Freedman-trained Homesman will look like the winner at some point during the Caulfield Cup. He makes his own luck up on speed and will make this a genuinely run affair alongside race favourites Incentivise and Delphi. The 55.5kg should be no issue for him; the question is whether he can match the standard of Incentivise, who won this year’s Australian Cup with 59kg on his back. If that horse wasn’t in this, a win for Homesman wouldn’t surprise, and he is a wider trifecta and first-four hope despite being a $51 chance.

It has been a long time since a horse has been so well prepared to claim the Caulfield Cup and Melbourne Cup double. The Peter Moody-trained star toyed with his rivals in the Turnbull Stakes when leading all-the-way at Flemington on October 2, reaffirming that his success in the Makybe Diva Stakes was no fluke. He is arguably the most in-form horse in the country and looks a clear standout selection in the 2021 Caulfield Cup, despite drawing the carpark. Brett Prebble will need to go forward on the favourite and hope for a bit of luck early on, but even if he does get trapped three wide in the running, he may just prove too good anyway. Incentivise is our clear on-top selection.

Explosive Jack has slowly been building towards a run at 2400m this campaign and gets there third-up in the Caulfield Cup. The three-time derby winner has chased home Incentivise in both the Makybe Diva Stakes and Turnbull Stakes and has been beaten by a combined nine lengths leading into this. He was hitting the line nicely, but even with that intent the $16 quote looks massive unders, especially considering he gets just 1.5kg off Incentivise on Saturday.

In our humble opinion, the Murray Baker & Andrew Forsman-trained The Chosen One presents great value in the Caulfield Cup. He was hitting the line with great intent in the Herbert Power Stakes on October 9 when beaten a length by Delphi. He went within half a length of winning the Feehan Stakes three runs back and simply wanted further when chasing home Zaaki in the Underwood Stakes. He ran third in this race last year when beaten under a length, before finishing fourth in the Melbourne Cup. He will be one of many making their runs from the rear of the field, and if the likes of Incentivise and Delphi are found wanting late, he could be the one finishing right over the top of them.

Some $91 is on offer for Ocean Billy, who is now under the care of Chris Waller. Considering he has struggled in easier races back in New Zealand this campaign, he is just simply not up to this.

Much like his stablemate Ocean Billy, Selino is set to struggle in the Caulfield Cup considering he has finished no better than fourth this spring. The $91 is an appropriate quote.

Persan was aided by having the run of the race in the Turnbull Stakes when beaten 5.25 lengths behind Incentivise. He is no doubt an out-and-out stayer and will appreciate the step up to 2400m. He has three starts at Caulfield for a win and two runner-up efforts, with his win coming over this track and distance in a much easier race. A win wouldn’t shock, but he may find three or four better.

The second of the Baker & Forsman runners is set to find himself in the ‘also ran’ category considering he was struggling a long way out in The Metropolitan when beaten 10.4 lengths. If the rain arrives, he will no doubt handle the going; it is just whether the 2020 ATC Derby winner can measure up in a race like this. We think he will struggle massively.

Now, we are not saying that Chapada is a massive winning chance, but the $61 on offer is offensive considering his run in the Turnbull Stakes. He was beaten 1.5 lengths on that day and at one stage in the home straight looked like he may be cause a massive upset. He finished ninth in this race last year and we expect a similar result this weekend, if not something a little bit better 12 months on.

The Anthony & Sam Freedman-trained Delphi has been aimed towards a race like the Caulfield Cup ever since arriving on Australian shores. He dominated the Herbert Power Stakes field on October 9 and on the quick seven-day back is a deserving second-favourite in the 2021 Caulfield Cup. He will roll forward under Damien Oliver, who will look to leave Incentivise and Brett Prebble trapped wide if possible. He won in Ireland on the seven-day backup last year, so that will not be an issue; it will be whether he can match what Incentivise throws down.

The Hawkes-trained Master Of Wine hit the line with great intent in The Bart Cummings at Flemington on October 2, but that was the first time he had finished better than 10th this campaign. His three starts prior to that suggests he will struggle here, so we are happy to let him go around without our hard-earned on.

Montefilia added a third Group 1 to her glowing resume with her win in The Metropolitan and is deservedly in the market for this year’s Caulfield Cup. She draws barrier 12 but is aided by the booking of Jye McNeil, who will make sure she is in a position to run on late and perhaps nab the front-runners in the shadows of the winning post. The four-year-old mare has shown she is more than capable of running on the back of a genuine tempo and, having ticked off a win at 2400m, has shown she can see the distance out. Include her in any exotics you are playing with.

The $64 available for Port Guillaume is massive unders considering the effort he dished up in The Bart Cummings. The Lindsay Park gelding failed to beat a runner home when beaten 14 lengths on that day, and we expect to see him jump with three figures next to his name.

The Bjorn Baker-trained She’s Ideel simply gave her rivals too much of a head start in the Metrop when finishing ninth, beaten 3.1 lengths. She draws barrier five on Saturday and under the guidance of Craig Newitt is sure to settle one or two pairs closer this time. Considering some of the prices on offer for her rivals, the $41 looks good value for a 1×3 play, but it will require an almighty effort to spring an upset. Look for her to run on with great intent and be pushing to fill the minor placings.

Despite winning one race from 10 starts, Young Werther is definitely a winning chance if he can replicate his run in the Turnbull Stakes. He hit the line with great intent, but Incentivise kept finding late. With just 52kg on his back here, the four-year-old gelding is another chance to turn the tables on his rival. He is yet to miss the frame when running in Group 1 company, which speaks to his class. From barrier eight, the in-form Daniel Moor is sure to find a spot in the moving line with cover. Despite Young Werther’s indifferent strike rate, look for him to give the fancied runners a fright.

Nonconformist has been aimed towards this year’s Caulfield Cup for over 12 months and went within a pimple of defeating Probabeel in the Caulfield Stakes a fortnight ago. He managed to beat Zaaki home by 1.75 lengths, which is not to be underestimated, but where he gets to from barrier 16 has us concerned about his chances on Saturday. Craig Williams hops on board for the first time and will no doubt have a game plan in place, but absolutely everything will need to go his way to feature in the finish. The five-year-old gelding is a $12 chance with online bookmakers, but we expect that to be closer to $21 prior to the jump.

Despite already booking her spot in the Caulfield Cup, Edward Cummings opted to run Duais in the Coongy Cup on Wednesday, where she managed to finish over the top of Floating Artist to claim victory. The big query will be whether she can handle the quick three-day backup; if she can, then she is in this right up to her neck. She is a genuine stayer and, with a win at 2200m next to her name in the Queensland Oaks, is one who we know will see out a strong 2400m. Make sure to add her in all trifectas and first-four bets.

Chris Waller does not hold a strong hand in this year’s Caulfield Cup, and Charms Star is looking for something easier than this. She was a hard watch in the Metrop when struggling to find clear air at a crucial time, but her form prior to that looks to be questionable up against her rivals in this.

Coming off a win in the Newcastle Cup two starts back, the Chris Waller-trained Great House was beaten by 1.75 lengths in the Metrop. That suggests that if he can get a run, he is a chance for a top-10 finish. The question remains whether he can handle a quality field such as this.

Constantinople is paying $301 for a reason. The former Melbourne Cup hope is a shadow of his former self, and even if he does gain a start, it is hard to see how he beats a runner home.

Outside of Incentivise, this looks to be an open Caulfield Cup; however, we expect the race favourite to chalk up a third Group 1 win in succession. Despite drawing the carpark, Brett Prebble will look to dictate terms and make his mount the one to run down. He has been aimed towards the Caulfield Cup and Melbourne Cup double, and we expect him to tick the first box this weekend.