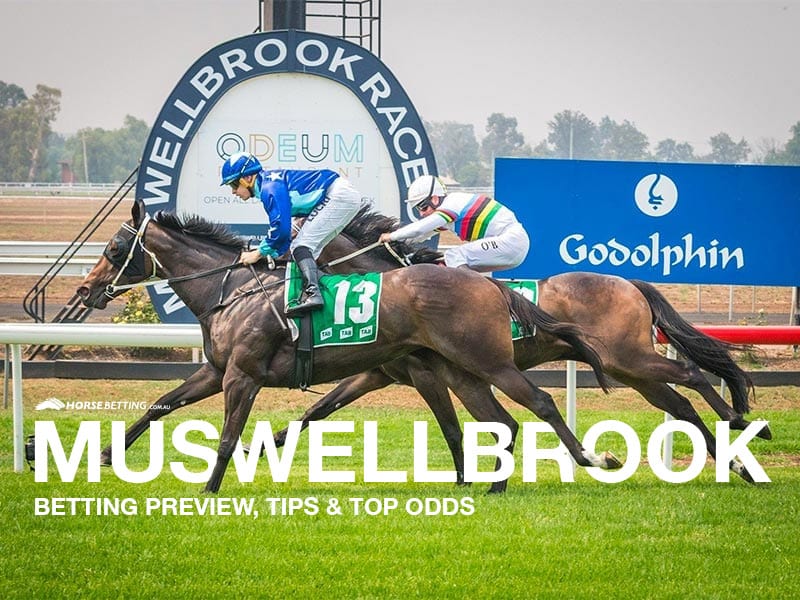 It is Muswellbrook Cup Day on Friday, with eight races set to be run and won from 1:15pm AEDT. HorseBetting’s New South Wales form analyst presents his best bets and quaddie numbers for the day, including his top picks in the two feature races. The track is rated a Soft 7 and the rail is in the true position for the entire course.

A couple of speedsters are set to line up in Friday’s Skellatar Sprint over 1000m. Satin Ribbons is probably a deserved favourite, but she will have to do a bit of work from the wide alley if she is to take up her favoured role, so we are siding with one at a bit more value. Richard Litt and Aaron Bullock combine with six-year-old gelding Lancaster Bomber, who has a very imposing record on rain-affected surfaces. The son of Denman has some quality midweek metropolitan form, and he is a winner over 1000m before. From barrier eight, Bullock will be parked just in behind the leaders on this galloper before producing him in the straight. He will be motoring home, and the $13 quote at Ladbrokes is too good to ignore.

Seven-year-old gelding Regal Stage already has a Snake Gully Cup, Mudgee Cup and Rockhampton Cup to his name, so connections will be hoping that he can add a Muswellbrook Cup to his resume. The Gai Waterhouse & Adrian Bott-trained son of Redoute’s Choice has only raced twice since his Rockhampton Cup win in July 2021 where he has failed to make an impact at Doomben and Randwick, but his two trials this time in suggest that he has come back well. Trialling behind the likes of Eduardo, Splintex and Tricky Gal will have ensured that he had a solid hit-out in preparation for his first-up run. This galloper has won three from five when fresh, while he also has a great record on wet tracks. Winona Costin will need to put in a good steer from the outside barrier, but his tough on-pace racing pattern should see him in it for a long way.

In the third race of the afternoon, Cameron Crockett will saddle up Salire, a promising four-year-old gelding. The lightly-raced son of Dream Ahead has won two of his four career starts and finished second when an odds on favourite in February at Mudgee. Crockett has since freshened the gelding and trialled him at Scone where he ran second to Circularity who lines up in this race too. Salire will be ridden by Aaron Bullock who has ridden him twice for two wins, while barrier 10 will see him slot in somewhere behind the leading division. He should be too good for them.