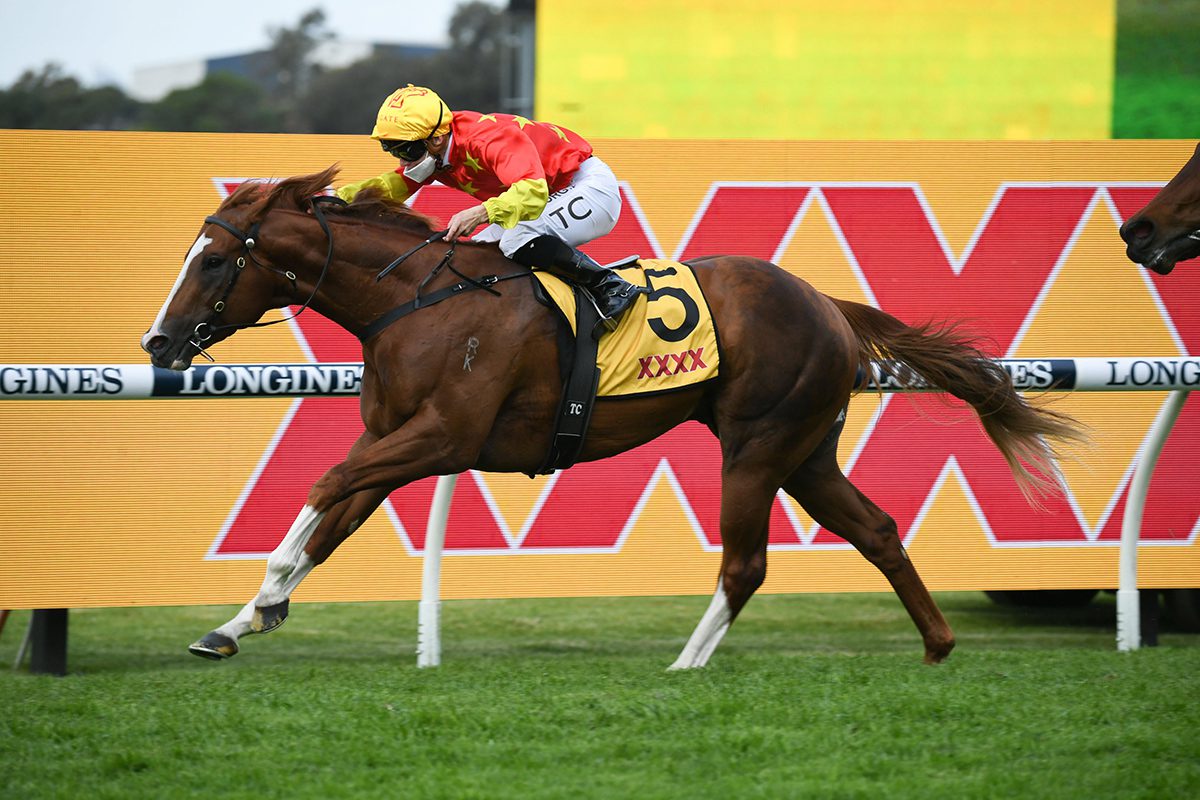 It was an upset victory in the Golden Rose (1400m) at Rosehill on Saturday, as In The Congo led all of the way to defeat odds on favourite Anamoe by two tenths of a length.

The Gai Waterhouse and Adrian Bott-trained colt had never missed the quinella in his first five starts and was coming off a defeat behind Anamoe in the Run To The Rose, but the son of Snitzel was able to turn the tables in the $1 million feature.

After jumping cleanly from barrier six under Tim Clark, In The Congo didn’t get over to the fence until they had already run 400m, but he was rated perfectly in front by Clark and was able to kick away at the 300m mark and put up a winning break.

“I had a conversation with Gai on the way here and I said to her I’ll roll to the first turn and might just try and get a breather,” Clark said.

“She said you keep him running and use his speed because it can win you the race.”

“So I did that and we pulled it off.”

“He is obviously thriving and all the team who look after him at Tulloch Lodge have done a wonderful job.”

“We’ve always thought he had that sort of ability. He probably didn’t execute early on in his career. He had that little, short let up and he’s come back and got it right every time although he hasn’t won every time. I thought he went even better again today.”

A Golden moment for @GaiWaterhouse1 & Adrian Bott, Gai's first win in the $1m XXXX Golden Rose 🌹as @clarkyhk goes all the way on In The Congo in the Group 1 feature holding off Anamoe with Coastwatch in third. @tabcomau pic.twitter.com/4baPWrS9hE

While Anamoe surged late, the Godolphin colt ran out of time to give favourite backers a much needed victory on what was a tough day.

In The Congo gave China Horse Club and Newgate Farm a Group 1 double on the weekend, after Wild Ruler was victorious in Friday night’s Moir Stakes at The Valley, while Waterhouse & Bott claimed five victories around Australia on Saturday, headlined by a treble at Rosehill (3 wins at Rosehill, 1 win at Sandown, 1 win at Goulburn).

Hear what the beaten jockeys out of the Golden Rose had to say post-race.

2nd – James McDonald (Anamoe): “Super. Deflating at the same time but very proud of the horse. He was primed for the race, he looked fantastic, he went great. Disappointing we went down but he will live to fight another day.”

3rd – Nash Rawiller (Coastwatch): “Super. Gee he ran well. Just sat off that speed and he has a great future.”

4th – Jason Collett (Artorius): “Great run. His racing pattern made it difficult today but the run was fantastic considering.”

6th – Regan Bayliss (Startantes): “Ran out of her skin. They really ran along at a good tempo. She was back along the rail and once she got balanced she really stormed through the line. Hopefully she pulls up well and she might be a Flight Stakes contender.”

7th – Sam Clipperton (Captivant): “I thought he ran well enough. It was a brutal run race. Quickened nice from the four to the two but just sustained a gallop from there on. A good run particularly if he is heading toward the mile.”

9th – Kerrin McEvoy (Giannis): “Just found them a bit quick on that ground over that trip.”

13th – Jean Van Overmeire (Moridan): “He just completely hung off the track and there was no stopping him.”

While the next logical step for these horses is a trip to Melbourne for the Caulfield Guineas, there has not been a great deal of movement in the market, with Artorius the main firmer after his eye-catching fourth, shortening from $6 into $4.50 with online bookmakers.