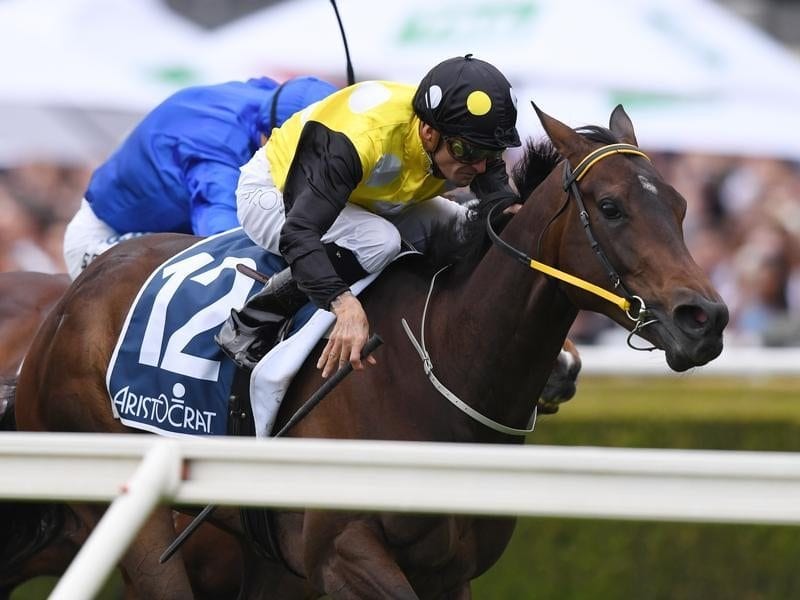 AN astute move to take In Her Time off the emergency list for The Everest and into the Sydney Stakes has paid dividends for trainer Ben Smith after the horse took out the weight-for-age race at Randwick.

Fellow Everest emergency Ball Of Muscle ($2.60 at William Hill) hit the front at the 200m stage and looked to be travelling better than the winner, but In Her Time battled on strongly and found the line to return $2.25 at Ladbrokes ahead of a fast-finishing Impeding ($2.40 at Crownbet).

Jockey Corey Brown believes In Her Time would have given the $10 million feature a shake had it made the final field.

“She is a lovely horse,” Brown said.

“It is strange she didn’t end up in The Everest, but she’s got the consolation anyway.”

Despite not travelling as well as the third-placed horse entering the latter stages of the race, Brown believes In Her Time had the race in hand.

“On paper today Joe Pride’s horse (Ball Of Muscle) was always going to run. I thought they would have gone a bit quicker to be honest and we would be one pair further back.

“She had a really soft run from a bit of a tricky barrier, positioned up the one and one, she ambled up the rise. I was very confident on her.”

The win backs up In Her Time’s strong performance in the Group Two Premiere Stakes two weeks when the horse won in similar fashion.

“I was a bit worried the way she put on weight during the week I thought she might have been a bit big but it was great,” Smith said.

“She’s come out and got the job done today and ran good time.”

Smith said the plan is to take the horse down south to compete in the Group One Manikato Stakes, the night before the Cox Plate.

“I just wanted to leave a bit in the tank, we’ll head to Melbourne now for the Manikato, for her to have done that today is amazing.”