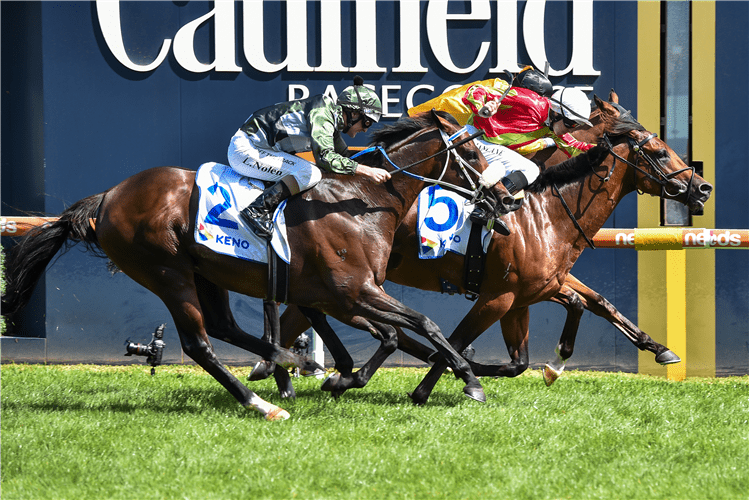 Warrnambool trainer Maddie Raymond took out the Group 3 Carlyon Cup (1600m) with a newcomer to the stable, Earlswood, who was making his Australian debut.

The entire had the run of the race, settling third on the fence before jockey Damian Lane peeled off the back of former Kiwi galloper, Callsign Mav at the top of the straight. Callsign Mav, who was making his debut for local trainer Danny O’Brien, kicked hard on the inside to make a race of it, but the UK import proved too good in the end.

Raymond was optimistic that her galloper would only get better after winning first-up over the mile, and had hopes of Group 1 success with the galloper.
“There’s plenty more to come”, Raymond told Racing.com in a post-race interview.

“Obviously the All Star Mile is a little bit tempting.

“He’s sharp enough today to win here, but we’ve got to get the votes”, Raymond said in reference to the public voting system of entry into the All Star Mile.

“We could go to a Blamey potentially and then the All-Star Mile.

“I think he is an ideal Australian Cup candidate”, suggested Raymond if an All Star Mile birth wasn’t to be.

The winner, who paid $12 on Sportsbet, came into the race as a bit of an unknown to punters, with no local race or trial form to speak of.

“Obviously there was that concern that he hadn’t had a jump-out leading into this”, Lane said after the Group 3 event.

“I gave him a good gallop at Warrnambool last Thursday and he went super.

“Credit to Maddie Raymond and her partner Paddy Bell for getting him right for today.

When asked about potentially going to the bigger track at Flemington for either the All Star Mile (1600m) or Australian Cup (2000m), Lane was confident he would be even better suited.

“I think it will only benefit him.

The timing of the two races would mean that the Warrnambool trained entire would need to run over the 2000m, then back up a week later over 1600m.

This would be an unlikely preparation if the galloper was to gain a start in the mile event, so as Lane said post-race, “The team has got some thinking to do”.