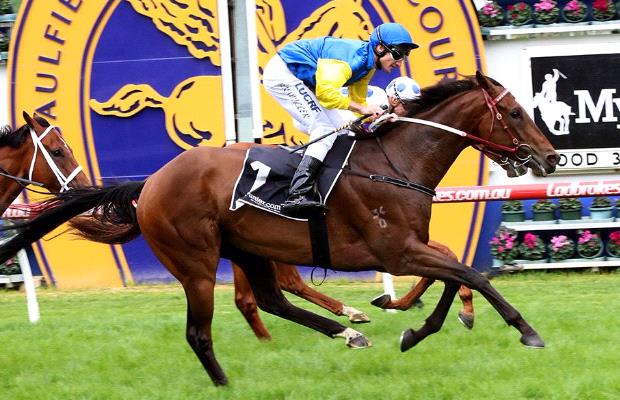 DARREN Weir had a four-strong charge for the first group one of the season and it was the closing $2 favourite which got the job done.

Black Heart Bart was backed in late with Sportsbet.com.au and ran as odds on in the Group 1 Memsie Stakes at Caulfield on Saturday.

The multiple group-one winner sat just off a hot pace set by Charmed Harmony and stalked the leaders heading into the home turn. Jockey Brad Rawiller called upon it as they turned and it kicked away for an impressive 1.25-length victory.

Weir said that since Black Heart Bart came into the stable, it’s been easy to train and it performed today without much official work.

“He’s an absolute ripper. He’s done that off just one trial – it was a great win,” Weir said.

“He’s just a proper racehorse, he’s been great for the stable and credit to the boys at the beach who look after him.”

Weir agreed that the fast pace up front suited Black Heart Bart more than his other three entrants.

“It worked out beautiful, Mahuta had his chance, Palentino ran on well, maybe Prince Of Penzance is the disappointing one,” Weir said.

“He’s just a great racehorse the winner, the owners are very keen to go to the Cox Plate with him so we just have to work out how to get there.

“It wouldn’t matter what race you put him in he’d run well.”

Rising Romance produced a stellar effort for second at each way odds and Mahuta held on well for third.